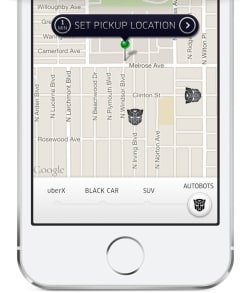 You've got to love weird cross-promotion opportunities. Transformers: Age of Extinction, the fourth film in the franchise from Michael Bay, may be one of the most anticipated blockbusters of the summer. To promote the new movie, its marketers have partnered with ridesharing service Uber to make the childhood dream of many people a reality. They are teaming up to let people hail the latest iteration of Optimus Prime and go for a ride to their destination.

Prime will somehow switch vehicles over the course of the film to become a highly customized Western Star semi, and that will be the truck available to ride in. However, it will be a very limited engagement. Prime will be driving around from 1:00 PM to 7:00 PM in Dallas on June 16, Phoenix on June 19 and Los Angeles on June 21. So getting to show up at your destination in a Transformer will be a very tough undertaking. Also, contrary to the photo to the right, Uber says that there will be only one semi available for rides on each day. It will all lead up to the film's premiere on June 27.

This is definitely a very clever idea. You would have been the coolest kid in school if this had been possible 30 years ago.