The history and future of the Ford Bronco

Some have suggested that the Bronco's demise was hastened by the fallout from the O.J. trial.

Twenty years ago today, ex-NFL linebacker Al "A.C." Cowlings drove his friend and onetime running back Orenthal James "O.J." Simpson on a parade lap of the Los Angeles highway system and onto an ignoble page of the history books. If you're in your late 20s or older, or a fastidious young student of 1990s American history, you're absolutely aware that Al and O.J.'s steed for the 'chase' was a white Ford Bronco. The white Ford Bronco, even.

The 1993 model-year SUV was only three years removed from the end of a 30-year run for the nameplate, one that's been embossed onto pop culture from June 17, 1994 forward. I remember it sourly, as one of the basketball fans that was forced to watch the NBA finals in a tiny box in the corner of a 27-inch set while NBC 's Tom Brokaw followed some 20 police cars, following the Bronco, at about 35 miles per hour. Oh, and in standard definition no less... the '90s were terrible.

The fallout from The Chase (sorry, NASCAR) is evident from even a cursory investigation, and reaches closer to the present than you might expect. In addition to dominating the headlines from that day in June to the contentious verdict in the fall of 1995, the chase inspired an instantiation of the ESPN documentary series 30 For 30, echoed into countless late-night and sitcom punch lines, and inadvertently helping to blight populate our TV screens with the Kardashian clan (Robert Kardashian was part of The Juice's star legal team). Some have even suggested that the Bronco's demise was hastened by the fallout from the O.J. trial – though Ford talking heads have (wisely) denied that the two had any concurrence... more on that in a bit. 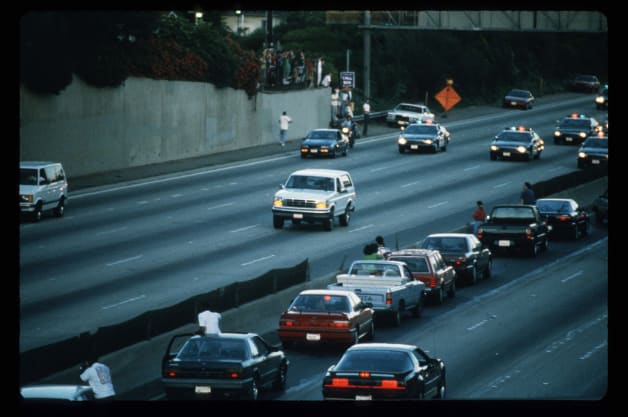 Before A.C. ever got his hands on his monochrome fifth-generation model, the Bronco line had delivered dutiful service for Ford. Conceived of as a rough-and-tumble Jeep rival for The Blue Oval in the mid-1960s, the two-door Bronco remained Ford's primary ORV offering until it was killed off in 1997. Larger and more feature-laden than ever at that point, it was apparently Ford's need for a still bigger SUV, and one with family-friendly four doors, that saw its Expedition scion take over for the fat part of the SUV boom in the late '90s and early aughts.


Between the Raptor precedent and the available Troller guts, a Bronco redux is at least a possibility for Ford, right?

With Escape, Edge, Explorer and Expedition currently providing Ford shoppers a fair range of utility options, the current lineup seems to lack only something butch and off-road minded for rounding out. There's enough interest in a Raptor-type SUV that the aftermarket has bitten, at any rate – why not something direct from the factory?

And, of course, the recent announcement that Ford subsidiary brand Troller would be building its diesel-burning T4 for the South American market, has stoked the flames of Bronco interest for a lot of American onlookers. That truck, seen above with a playful Autoblog application of the staff-favorite Bronco 'Free Wheeling' sunset stripes, actually seems to make good on the substantial promise first offered by the Bronco Concept at the 2004 New York Auto Show.

So, between the improving market, the Raptor precedent and the available Troller guts, a Bronco redux is at least a possibility for Ford, right? Well, not so much, really.

For starters, as much as we might want a Troller-based product to underpin a new North American product, Ford Product Communications Manager for Utility Vehicles, Mark Schirmer, tells Autoblog that there are no common architectures between the T4 and any current Ford vehicles. Troller was purchased by Ford in 2007, but has not yet been enveloped by the One Ford umbrella. That means the entirety of the T4 would have to be certified for our roads and our safety standards, making a T4-to-Bronco conversion massively expensive. 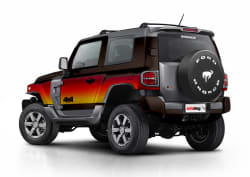 What's more, without a Troller donor waiting in the Brazilian wings, there's not really a product in Ford's current portfolio that makes sense for a Raptor-like conversion; nothing that could credibly be butched up with off-road parts and made worthy of the historical nameplate. From Escape up through Explorer, Ford's crop of utility vehicles fall decidedly in the unibody-crossover camp. The only suitable platform for an ORV-ready Bronco, especially one with two doors, would be the F-150, for which the Raptor treatment is now the precedent for off-roading variants.

We're told that the Bronco name does still have a lot of currency amongst Ford executives, but the lack of a go-to, easy-to-execute business case for the model would appear to land it in the daydream category. "You can't do everything," said Schirmer.

So A.C.'s white Bronco may not have a spiritual successor under clandestine production right now (though apparently, you can rent the original for private engagements if you dare), but it's best to never say never, I think. As it turns out, Ford saw a massive 25-percent bump in sales of the Bronco from the 1993 model year to the Juice-fueled 1994 model – from 29,729 units up to 37,367. (For what it's worth: neither were close to Bronco's record 82K-unit year of 1978.) We'll almost certainly not be the only media outlet that will publish a Bronco story on today's 20th Anniversary, perhaps a second, bigger O.J. bump will be enough to get Ford over the hump?

Probably not. For now Troller T4 dreams and historical Bronco photos will have to do. Enjoy both here, and feel free to share your own "I remember where I was..." O.J. story, or your favorite Bronco memory, in Comments.