A Supercharged Power Wagon Worthy Of The Nürburgring View All Specs
We'd consider giving up vital organs for the opportunity to drive any number of vehicles on the Nürburgring: supercars, racecars, track cars, even hot hatches... but a station wagon? That might not seem like a top choice at first blush, but this is no ordinary wagon. This is the Jaguar XFR-S Sportbrake.

Now if that name leaves you scratching your head, there are several good reasons for that – not least of which is the unfortunate reality that, unlike so many performance-oriented crossovers and sport-utes, the Sportbrake is not offered in North America. But suppose it were, or that weren't a factor. You'd likely still be left wondering how the name Jaguar ended up on a station wagon in the first place, and how that machine wound up bearing the letters R-S, the suffix affixed only to Coventry's most hardcore performance models.

Our brief story goes back a little over two years to when Jaguar revealed the XF Sportbrake at the 2012 Geneva Motor Show, giving its mid-level sedan an elongated roof and added cargo capacity. The Sportbrake may not be the first wagon to wear the Leaping Cat badge, but following the lamentable X-Type Sportwagon, it could be argued that the XF is the first authentic Jag estate.

In giving prospective Jaguar buyers the option of a wagon – or, conversely, wagon buyers the opportunity to drive a Jaguar – the quintessentially British automaker did not initially offer a performance version. Not until two years later when it revealed the XFR-S Sportbrake at the 2014 Geneva Motor Show, skipping any conventional petrol-powered options (which it does not offer in any market save for China) and right over the XFR performance model offered on the sedan and going straight for the most improbable cross-breed it could have concocted. Having struck us from the get-go as the kind of wagon we had to get our hands on, we eagerly headed to Germany to experience it first-hand. 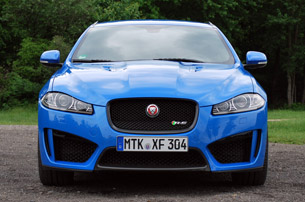 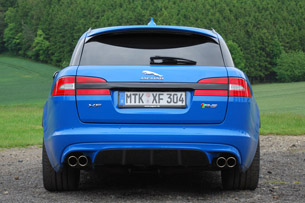 A quoted 0-60 time of 4.6 seconds is downright blinding for a wagon.

Walking around any ordinary Euro wagon – say, a diesel-powered XF Sportbrake, for example – you may find yourself wondering how much space it has or how much stuff can fit in it. But circumnavigating the XFR-S Sportbrake, your eyes invariably gravitate less towards the back than they do to the front. That's where you'll find a familiar story, but one which we haven't tired of telling just yet: it's Jaguar's long-serving AJ-V8, an engine developed with Ford Premier Auto Group money in the mid-90s. The engine has powered models from Lincoln, Aston Martin, Land Rover, and even the retro Ford Thunderbird, but it has always been a Jaguar engine first and foremost, and by this point, it's found its way into everything Coventry makes.

It's also been updated, having grown to displace 5.0 liters and pack a supercharger. But where the same V8 churns out 470 horsepower in the XF Supercharged and 510 hp and in the XFR, in this, its ultimate incarnation to date, output has swelled to 542 horsepower and 502 pound-feet of torque. It's the same spec you'll find not only in the XFR-S sedan, but also in the outgoing XKR-S Coupe and Convertible, the sleek new F-Type R Coupe and the flagship XJR sedan. But with a 4,336-pound curb weight – 200 pounds heftier than the sedan on which it's based – the Sportbrake is not only the heaviest of that performance sextet, its the heaviest vehicle Jaguar makes. In fact, it's weightier than some Land Rover offerings, models like the LR2/ Freelander, Evoque and Defender, though considerably lighter than the LR4/Discovery, Range Rover and Range Rover Sport. That nets the XFR-S Sportbrake a quoted 0-60 time of 4.6 seconds – 0.2 seconds slower than the sedan, but hardly sluggish for anything but a top-flight performance model, and downright blinding for a wagon with 19 cubic feet of cargo space (59 cubes with the rear seats folded). 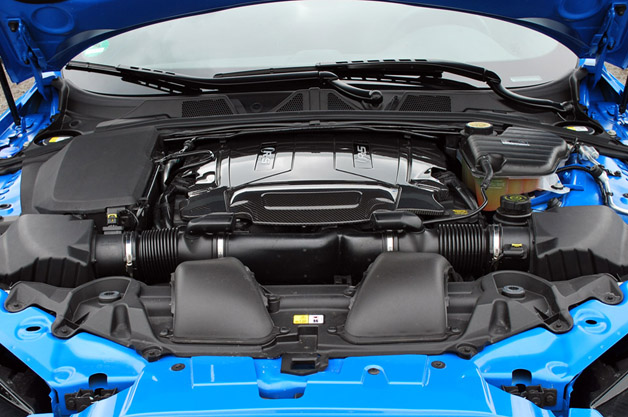 We'd ballpark a price of $103k if it were offered Stateside. Unfortunately, it's not.

That combination of power and practicality put the XFR-S Sportbrake in league with only the likes of the Mercedes-Benz E63 AMG Estate, Audi RS6 Avant and Cadillac CTS-V Sport Wagon – each of which employs a different term for "wagon" – but, like the Jag, packs a forced-induction V8 with over 500 horsepower to rapidly haul whatever you've got. The Mercedes and Audi both offer more power and more torque for quicker performance, but get there with turbochargers and all-wheel drive. The supercharger and rear-wheel drive put the Jag more in line with the Cadillac, which may seem more out of date (especially with a new-generation standard CTS already out), but both the CTS and XF were introduced back in 2007, with the Jaguar undergoing a facelift in 2011. The CTS-V may also offer more punch for less cash, but that's only relevant in markets where both are sold. In the UK, the XFR-S Sportbrake carries an all-in list price of £82,495, representing a £2.5k premium over the sedan. Adjusting for the UK's typical price and taxation premium, we'd ballpark a price of $103k if it were offered Stateside. Unfortunately, it's not, but then, neither is the RS6 or the all-wheel-drive CLS63 AMG Shooting Brake, leaving only the E63 and CTS-V to duke out this particular battle on American roads.

Our route took us along twisting mountain roads and sweeping spans of Autobahn from the airport in Frankfurt, westward through the Eifel mountains on a pilgrimage to hallowed ground: the vaunted Nürburgring Nordschleife. Jaguar rented out the track for the entire morning, also giving us the opportunity to sample the XJR and XFR-S sedans as well as the F-Type R Coupe (the latter only for a regrettably paced warm-up lap). Needless to say, the F-Type felt the most at home on the 'Ring, but the Sportbrake more than held its own. This, despite its weight penalty over both sedans (the larger XJ being made of aluminum versus the smaller XF's steel frame). The XFR-S also features a more performance-tuned suspension than the XFR or XJR (even the Ring Taxi version in which we later rode shotgun), and the Sportbrake's bits are further retuned to handle the extra weight. 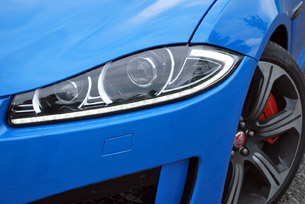 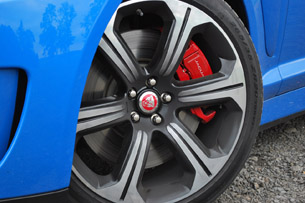 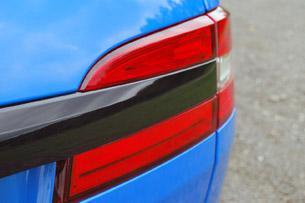 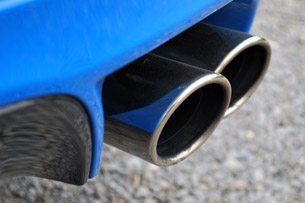 Electric-blue top-stitching and carbon-textured leather trim may not be everyone's cup of Earl Grey.

Climb out of the XFR-S sedan and into the Sportbrake as we did in between hot laps, and everything feels familiar: the thick-rimmed steering wheel and the well-bolstered seats tell you this is a pure-bred, as does the electric-blue top-stitching and carbon-textured leather trim. The latter accents may not be everyone's cup of Earl Grey, but helps differentiate the cabin space in an XFR-S – sedan or wagon – from an XF in more pedestrian trim. The only thing that will tell you this is not, in fact, a sedan but a long-roofed wagon is when you look in the mirrors: the tunnel-vision through the rear-view mirror and the stretched roofline where the spoiler might be on the sedan as viewed through the side mirrors.

Nor will you likely notice the weight penalty once you get moving. Not in any negative way, at any rate. That extra mass is shifted over the rear wheels – not a bad place, after all, to put it in a rear-drive car, whether you're looking to gain traction or (with the electronics set to Track mode or defeated entirely) determined to break it for some sideways action. If the discrepancy doesn't pop out at you on the Nürburgring, it's not likely to anywhere else, either. Think, as we did, of the minute difference discernible between coupe and convertible versions of a supercar like the McLaren 650S and you won't be far off. 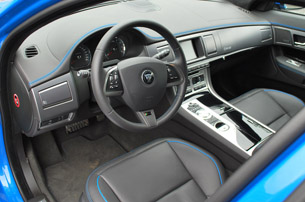 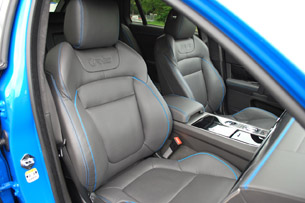 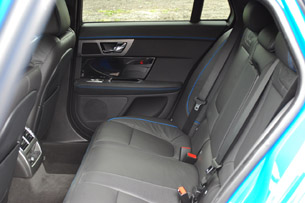 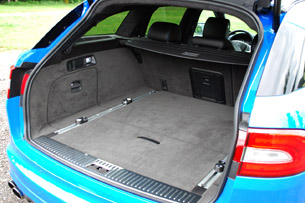 The supercharged V8 packs a punch, and the exhaust note is second to none.

The obsessive might wish for slightly weightier steering (though feel and response leave little to be desired), and a left pedal with a bit more initial bite under braking. With so much weight to anchor, a set of carbon-ceramic brakes might be in order, but for the time being, that technology remains exclusive to Jaguar's top sports coupes. Old-school as it is, the supercharged V8 packs a punch and pulls progressively up and down the rev range, and the exhaust note – unimpeded by turbo spools but augmented by the faint whine of the supercharger – is still second to none. The eight-speed automatic transmission gives you plenty of ratios to choose from, and with the rotary dial turned to Manual, it holds whichever cog you've summoned by paddle as close to the redline as you dare rev.

Teaching a vehicle this large and heavy to dance, meanwhile, is no easy feat. By rights, something this size should seem like it has two left feet – but the XFR-S Sportbrake will take on everything the Nordschleife has to throw at it and ask for more, all without delivering too punishing a compromise along bumpier roadways. And despite its relatively large profile, the Sportbrake proved assuringly stable at speed, even at the indicated 175 miles per hour we reached by the end of a fresh stretch of vacant, derestricted Autobahn, at which point the XFR-S felt like it could keep pulling to its quoted 186-mph top end. 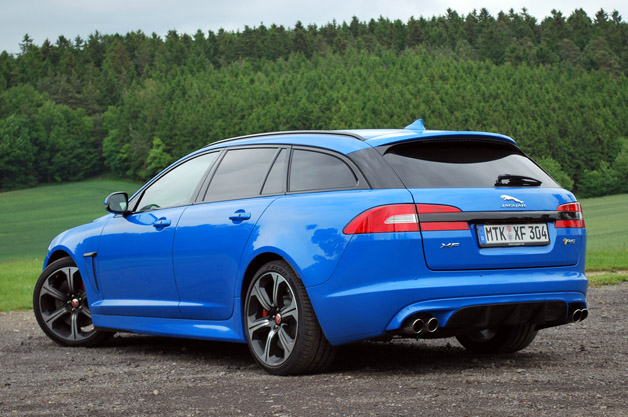 At the end of two memorable days of driving on some of the best swaths of pavement we could ask for, there remain few vehicles for which we would have given up the keys to the Jaguar XFR-S Sportbrake. Maybe a handful of supercars, racecars, track cars or hot hatches, but not many – especially if we wanted to bring some friends, family or disoriented pets along for the ride. Nor would you find on that short list many sport-utes or crossovers – American buyers' taste for which remain the main reason why foreign automakers like Jaguar won't bother bringing over a performance wagon like this one (and why BMW won't make a Touring version of its new M5 altogether).

Like all great things – and make no mistake about it, a supercharged Jaguar on the Nordschleife is most definitely a great thing – our experience with the Sportbrake eventually had to come to an end. But with this much power, poise, prestige and practicality, the XFR-S left us longing for a low-slung power wagon to call our very own equally as much as we did for another lap or two of the 'Ring. In the end, that may be the most impressive feat Jaguar has performed to date. 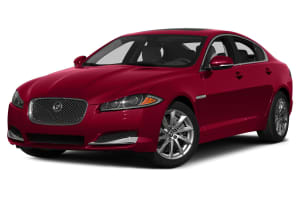