UPDATE: An earlier version of this story contained language erroneously linking this recall action to a Jeep Grand Cherokee/Dodge Durango brake recall announced in March. According to Eric Mayne, a media relations manager at Chrysler, the two safety issues are unrelated. The text in the story below has been updated to reflect this information.

Early last month, we reported on Chrysler issuing a preemptive, proactive recall for about 25,000 units of the Jeep Grand Cherokee and Dodge Durango. The issue revolved around a brake system that wasn't causing any actual problems, but delivered an unsatisfactory brake feel, so Auburn Hills called in 25,000 SUVs around the world, including 18,700 in the United States. 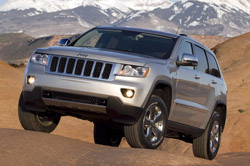 Now Chrysler is recalling a much larger number of these SUVs for unrelated braking issues. The National Highway Traffic Safety Administration has issued a recall statement regarding precisely 655,354 examples of the Grand Cherokee and Durango, covering the 2011 through 2014 model years. In addition, Chrysler is recalling 42,380 units in Canada, 21,376 in Mexico and 159,685 overseas.

Whereas the previous problem Chrysler found in the March recall centered on a brake fluid flow issue related to the vehicles' Ready Alert Braking system, this recall focuses on the brake booster, whose center shell has been found to be subject to corrosion, a condition that could allow water into the brake system. That water, in turn, can freeze, preventing the brakes from working as well as expected.

As a result, the 644k Jeep and Dodge models are being called in to their local dealerships to have their brake booster inspected. If the booster works correctly, dealers will simply add a new shield. If not, the booster will need to be replaced. Owners should expect to begin receiving notification at the start of next month. Scope out the notices from both NHTSA and Chrysler below.
Show full PR text
RECALL Subject : Loss of Power Brake Assist
Report Receipt Date: APR 01, 2014
NHTSA Campaign Number: 14V154000
Component(s): SERVICE BRAKES , SERVICE BRAKES, HYDRAULIC
Potential Number of Units Affected: 644,354
Manufacturer: Chrysler Group LLC

SUMMARY:
Chrysler Group LLC (Chrysler) is recalling certain model year 2011-2014 Jeep Grand Cherokee and Dodge Durango vehicles manufactured from January 5, 2010, through September 8, 2013. The subject vehicles have a brake booster with a center shell that may corrode and allow water to get inside.

CONSEQUENCE:
The water inside could freeze and limit the braking ability of the vehicle, increasing the risk of a crash.

REMEDY:
Chrysler will notify owners, and dealers will add a water diverter shield to the booster after the booster has been tested to confirm it can hold an acceptable amount of vacuum pressure. If the booster inspection confirms an unacceptable loss of vacuum pressure, the booster will be replaced. Repairs will be made free of charge. The recall is expected to begin in May 2014. Owners may contact Chrysler at 1-800-853-1403. Chrysler's recall campaign number is P14.

The investigation discovered certain vehicles have brake boosters with small crimp joints; and these joints may exhibit corrosion when exposed to water. Should water enter the boosters through corroded joints – a previously unseen occurrence – brake function may be compromised if the water freezes.

Absent water ingestion in sub-freezing conditions, a booster that exhibits corrosion will deliver brake function in compliance with federal safety standards. (The vehicles are equipped with a hydraulic boost compensation system that aids performance, even when booster vacuum levels are low.) However, customers may experience excessive brake-pedal firmness.

Chrysler Group is aware of one related accident and no injuries.

Chrysler Group will inspect the brake boosters on certain Jeep Grand Cherokee and Dodge Durango SUVs, model years 2011-2014. The boosters may be replaced if their capability has been reduced. All boosters will be equipped with a shield to insulate their crimp joints from water.

The cost of this work will be borne by Chrysler Group.