A Good Toyota, But A Good Truck? View All Specs
The Toyota Tundra is the automotive version of off-brand Cheerios: it doesn't dominate the market, and it's not the first model people think of when they hear the term " pickup truck."

Ford, General Motors and Ram dominate the segment with vehicles that offer ridiculous levels of towing and payload capacities and models loaded with luxury items and primed with tech-rich engines. The off-brands, meanwhile, are led by the Tundra, which while still accounting for six-figure sales (112,732 units in 2013, up from 101,621 in 2012), sits well behind the F-150s and Silverados of the world. After our first drive of the revamped 2014 Tundra, we came away thinking this truck is a total underachiever, aimed at placating Toyota loyalists and doing little to win over new customers.

But everybody deserves a second chance, and we thought a week's drive in a different environment might lead to a different – or at least a more fully realized – opinion. While the Tundra might not be an industry leader, it still makes it on many truck buyers' shopping lists. So, should you consider this off-brand pickup truck? To find out, we borrowed a top-of-the-line Tundra Platinum for a week. Read on to see what we found. 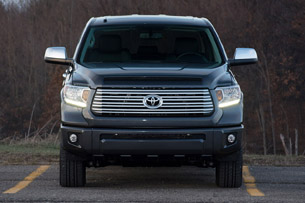 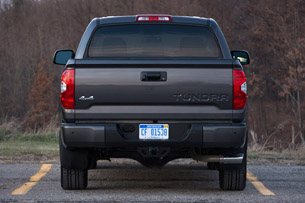 The Tundra looks brutish. That big, dominating front fascia with its long, wide, non-functional scoop above the grille and LED headlight accents give it an imposing look. The expansive cabin dominates the profile view, and our CrewMax-bodied tester gives the truck an almost out-of-proportion look, because there's tons of room for backseat passengers. From the rear, the chunky taillights and embossed "TUNDRA" in the tailgate add to the truck's bigger-is-better design philosophy.


In the cabin, our Platinum-trimmed tester has an almost Lexus-like sensibility.

In the cabin, our Platinum-trimmed tester has an almost Lexus-like sensibility. The quilted leather on the dash, doors and seat uppers stands out in an increasingly luxury-oriented truck market. It looks good and feels quite nice to the touch. We also note Toyota has opted for a softer leather on the dash and doors, and something a bit more durable on the seats. The painted plastics used on the dash look good and feel solid, while the soft-touch materials on the upper dash and doors make the Tundra Platinum feel more luxurious.

From the driver's seat, visibility is excellent throughout, thanks to the Tundra's high-riding nature, expansive greenhouse and reasonably skinny A-pillars. The tilt-telescopic steering wheel is wrapped in soft leather and is heated, a welcome touch as winter continues to bear down on southeastern Michigan. Power thigh support helps make the front leather seats thoroughly comfortable, too. If you're long-legged, like we are, this is a feature that will prove its worth within the first couple of miles on the road. e'd have no qualms driving long distances in the Tundra.

The rear seats aren't uncomfortable – they don't feel like second-class jump seats, like in some other pickups.

Anyone we put in the back seat had a similar point of view. The second row on the Tundra's CrewMax body style is absolutely mammoth. There's 42.3 inches of rear legroom, which for comparison, is more than the Chevrolet Silverado crew cab (40.9 inches) and just 0.7 inches less than the new Mercedes-Benz S-Class, a car designed for rich people who like to be chauffeured around. The rear seats aren't uncomfortable, either – they don't feel like second-class jump seats, like in some other pickups. They can also be flipped up, adding a bit of interior cargo space.

Before we get to the heart of the driving impressions, let's talk about the Tundra's oily bits. Under that big hood sits a 381-horsepower, 5.7-liter V8. Peak power arrives at a lofty 5,600 rpm (just 300 revs shy of redline) while all 401 pound-feet of torque are deployed at 3,600 rpm. A six-speed automatic is the sole transmission, and while rear-drive comes standard, our tester was equipped with four-wheel drive. The Tundra sports a live rear axle, complete with leaf springs, while the front axle uses a double-wishbone setup. Unlike the majority of Toyotas, it also retains an old-fashioned hydraulic power-steering arrangement. The brakes, meanwhile, use 13.9-inch vented discs in front and 13.6-inch vented discs in the back. On our tester, the binders arrived shielded by a set of 20-inch alloys wrapped in Bridgestone Dueler Alenza tires. 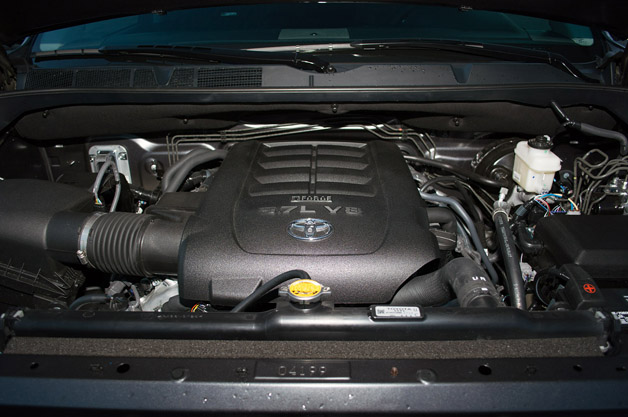 The Tundra's power figures look strong, but only until you take a peek at the curb weight of our Platinum CrewMax 4x4 tester. At 5,860 pounds, this is not a light pickup, and it shows on the road. Off the line, the 5.7 responds well, leaping ahead with surprising verve for a big pickup, but it struggles as the miles per hour increase. We found an uphill freeway on-ramp a particular challenge, as the V8 struggled to get up to speed in time to merge. The throttle response isn't particularly linear, either, due to a rather dull tip-in. It's more or less something that we'd get use to over time, but it's worth mentioning.


Off the line, the 5.7 responds well, but it struggles as the miles per hour increase.

Accompanying the engine at the higher reaches of its rev range is an unpleasant racket. It sounds unrefined and coarse, two attributes we don't normally associate with Toyota V8s. Compounding the issue is the amount of engine noise that enters the cabin. This is disappointing, particularly considering how quiet and composed the truck is at lower engine speeds.

Fuel economy is woeful – another downside to all that weight forcing drivers to run the engine hard. Mike Harley pointed out the Tundra's lack of fuel-saving features in his original drive of the 2014 Tundra, and now that we've driven the truck for a week in the real world, the lack of modern bits like an eight-speed transmission or direct injection are glaring. Our first jaunt in the Tundra, from midtown Detroit to the northern suburbs of Oakland County saw a meager 12.8 mpg. That figure climbed slightly following a prolonged highway run, but only to 13.5 mpg. Attaining the 17 mpg highway predicted by our truck's window sticker strikes as unlikely outside of ideal conditions. 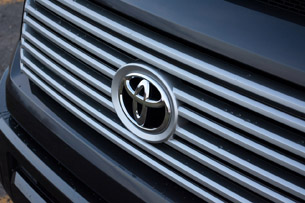 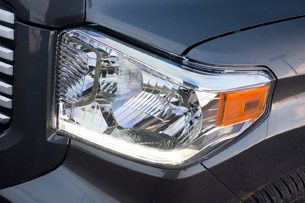 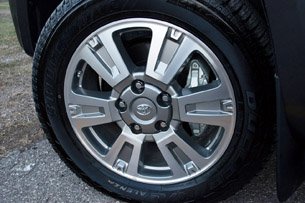 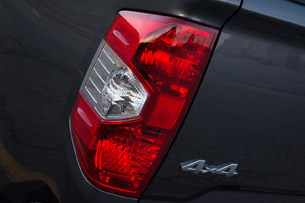 Engine issues aside, the Tundra's six-speed automatic is a really solid gearbox. Upshifts are quick and smooth, while there isn't a lot of hunting on downshifts. And while working the console-mounted gear selector is nice, the Tundra's manual mode is still rather poor. It takes inputs as mere suggestions, rather than commands, and is certainly not our first choice for clutchless, DIY shifting.


As is the way with most fullsize pickups, feedback through the chassis is pretty much absent.

As we mentioned, the Tundra makes use of a decidedly old-school suspension setup (okay, old school now that Ram is fitting air suspensions to the 1500). The solid-rear/leaf-spring setup doesn't ride particularly badly, considering it's a carryover item from the pre-facelift Tundra. It can get crashy on pothole-strewn Michigan roads, but feels largely composed and stable at freeway speeds and on smoother surface streets. Bigger bumps and imperfections can send some unpleasant feelings through the Tundra's suspension, but it's not hugely disruptive or out of place for an empty leaf-sprung pickup. There's not a lot of roll here, and the damping on the Tundra copes well with sudden pedal inputs. As is the way with most fullsize pickups, feedback through the chassis is pretty much absent.

Despite its hydraulic power steering, the tiller in the Tundra is still very much designed for a pickup truck. It's light, and doesn't weigh up enough as it's turned. However, its relaxed nature is good for highway cruising. Feedback is limited, although that shouldn't come as a shock considering the type of vehicle. That said, the Tundra's level of communication is better than some of the electric power-steering setups we've tested in other vehicles. 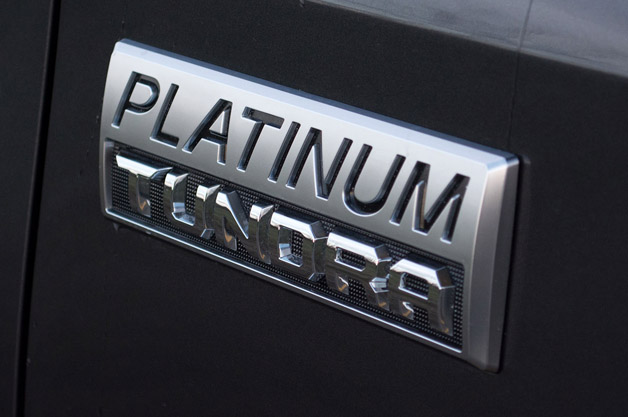 Now, to bring up the Tundra's weight in a positive sense – the brakes were quite good, despite the truck's body fat. The pedal is linear and easy to modulate, giving the Tundra a sense of sure-footedness that belies its heft.


The CrewMax is the least able member of the entire Tundra family.

The only way to get a Tundra Platinum is with the CrewMax cabin and the accompanying 5.5-foot bed. This is not an ideal setup for those that value payload or towing capacity in their pickups. The CrewMax is the least able member of the entire Tundra family, managing the lowest overall payload (1,440 pounds) and the lowest towing capacity (9,000 pounds). That 5.5-foot bed is surprisingly tiny – we barely fit an unassembled chest of drawers from Ikea back there.

Prices for the Tundra Platinum start at $47,600. Blind-spot monitoring with cross-traffic alert and a set of running boards are the sole options at this high trim spec. BSM can be had on its own for $500, or as a package with the running boards for $845. Our truck also included a $365 bed liner, which along with a $995 destination charge brings the as-tested price to $49,805. 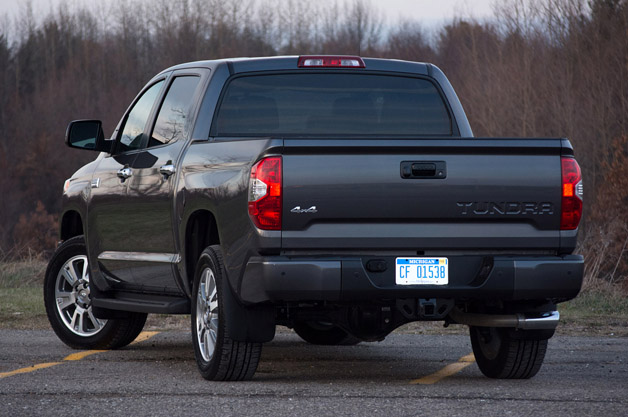 The Tundra is, however slightly, a value over its domestic counterparts.

At the start of the story, we discussed how the Tundra is an off-brand pickup relative to the competition. A key quality of store brands is that they're usually cheaper than their name-brand counterparts. So, how does the Tundra stack up? With a 2014 Ford F-150 Limited 4x4 starting at $53,830, a Ram 1500 Laramie Limited hitting $51,600 and a Chevrolet Silverado High Country ringing in at $48,800, the Tundra is, however slightly, a value over its domestic counterparts.

Should you buy one, though? While it is nominally more affordable, its poor fuel economy, small bed size and lower towing capacity certainly represent major strikes against it. Still, the Tundra isn't a bad pickup truck. It's a targeted vehicle that's not designed to tackle worksites like the domestics. It's a vehicle for loyal Toyota customers who just want a big, comfortable truck from the brand they're comfortable with. It might not win many converts, but with such a well-crafted interior and a spacious backseat, at least the Tundra isn't likely to disappoint the faithful.


UPDATE: An earlier version of this story indicated that the Tundra's towing capacity of 9,000 pounds was lower than that of both the F-150 and Silverado. Neither of the American trucks comply with SAE J2807, a unified towing standard set to be adopted by all light-duty pickups in 2015 – the Tundra is already compliant. The new rating system is expected to lower overall tow ratings compared to non-compliant trucks. Therefore, we've stricken the comparison of the Tundra's tow ratings with its American competition. 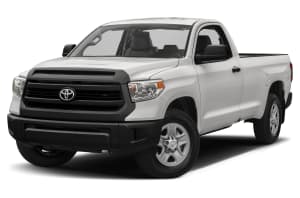