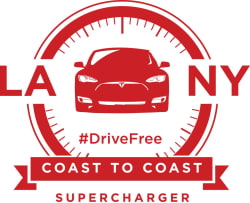 Right now, two Tesla Model S EVs are crossing the US from Los Angeles to New York, hoping to be a big deal. Sure, a father-daughter team already claim they've made the cross-country drive, but this time, it's an official Tesla event and the company has its eyes on a Guinness World Record prize.

The drivers left the Tesla design studio in Hawthorne, Los Angeles at midnight last night, and the plan is to use the company's just-completed Supercharger network to achieve the "lowest charge time for an electric vehicle traveling across the United States." We didn't know that was a category, either. Tesla now has over 70 Supercharger stations in the US and all of them are free-to-use for Model S drivers, which is why you can follow along on this record attempt via Twitter using the #DriveFree tag.

As of early this morning, the teams made it to the Supercharger station in Kingman, AZ and posted this sunrise pic. We wish them safe travels – they will soon reach the snowy northern parts of the country since the current Supercharger route will take them through the upper Midwest on the way to the East Coast.