Smiling On The Inside

View All Specs
1 Review
Almost by definition, affordable compact cars aren't supposed to be fun. Sure, hot hatches get our blood pumping, but not long ago, the terms "compact car" and "economy car" could safely be used interchangeably. A key exception for the last decade has been the Mazda3, a car that has consistently delivered more dynamic thrills and tactile feedback than its contemporaries. Competitors have picked up their game significantly in recent years, however, leaving the Mazda3 wanting in several areas, including overall refinement, in-car technology and cabin appointments, so Mazda went back to the drawing board to create this all-new third-gen model for 2014.

Including this redesigned 2014 model, Mazda's recent crop of new products have targeted North America's hottest non-truck segments – compact car, midsize sedan and compact crossover/SUV. Yet it might be fair to call this launch the most important of them all, as the 3 remains the Japanese marque's best-selling vehicle. While America's pool of compact hatchbacks isn't exactly deep, the 2014 Mazda3 still has a challenging road ahead of it competing against two-box compacts that include the popular Ford Focus and recent additions like the all-new Kia Forte and the still-new Hyundai Elantra GT. 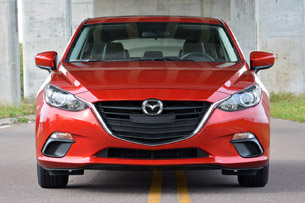 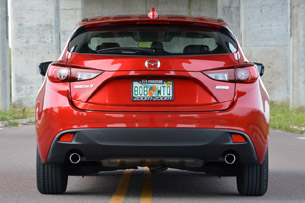 The 2014 Mazda3 may have made its big debut last summer and gone on sale in August, but it still catches our eye every time we see it. As much as we like the styling of the new Mazda6 sedan, the company's Kodo design language arguably looks even better on this smaller scale. Gone is the former Mazda3's awkward, smiling front end, replaced by a sterner, scowling expression that sets the tone for the rest of the car. An upright shield-shaped grille is flanked by dark, narrow headlights that help form the sweeping front fender lines, and a similar treatment can be found at the rear, which is marked out by wide rear haunches and horizontal taillights.


It manages to look a bit like a rear-drive vehicle from BMW or Infiniti.

Overall, the Mazda3 five-door looks a lot like a shrunken CX-5 – a strong compliment – but the best part of its styling might be that it doesn't resemble a typical front-drive econobox. With its stretched dash-to-axle ratio and long, flowing lines, the 2014 Mazda3 manages to look a bit like a rear-drive vehicle from BMW or Infiniti.

If we had any major complaints about the outgoing Mazda3, they usually centered on its generally lackluster interior. After plopping down behind the wheel of this particular Mazda3 i Grand Touring, though, we're happy to report there is nothing lackluster about its new cabin. It's vastly improved in every area, and we particularly appreciate that the chunky two-tier instrument panel of the outgoing 3 has been supplanted by one with a smoother, more cohesive look (although some of us could have done without the piano black trim and obviously fake carbon-fiber accents). Mazda still refuses to bring much color into the cabin, so aside from the top-of-the-line Mazda3 Grand Touring models, the palette (aside from small trim pieces and seat stitching) is limited to black or... black. 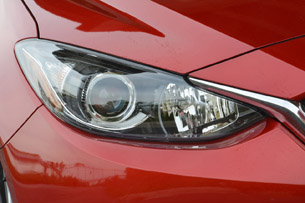 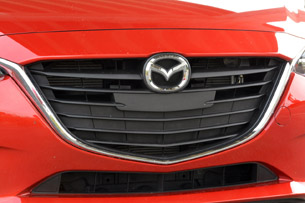 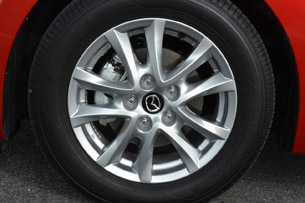 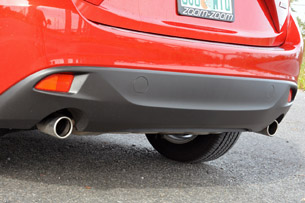 One of the coolest features about the 3 is its new navigation system, which the Grand Touring gets as standard equipment. We're not crazy about the tacked-on look of the center-mounted display, but this iPad-like screen-mount strategy seems to be picking up steam with the Mazda3 and cars like the Mercedes-Benz CLA. Either way, the Mazda3's sizeable touchscreen allows users to drag through the various screens like a smart phone, and there's also an iDrive-like, all-in-one rotary control knob aft of the shifter that works for both basic functions and higher-level tasks like inputting addresses and accessing downloaded apps or dialing phone numbers. Another small-yet-appreciated feature of the nav system is a prompt that displays text on the screen for approaching streets as you're driving.


It offers marginally less legroom and headroom than its predecessor.

On paper, the 2014 Mazda3 has somehow managed to get bigger, yet it offers marginally less legroom and headroom than its predecessor. However, it's still on par with competitors like the Elantra GT and Focus five-door in terms of both passenger space and cargo volume. Although the Mazda3 occasionally reminded us of its shapely roofline when we inadvertently bumped our heads on the door opening, once inside, it provided a decent amount of space considering its footprint.

In particular, the front seats offer everyday driving comfort while still being supportive enough for mountain roads. However, you might want to reserve the backseat for smaller or tag-along passengers. The true advantage of a hatchback is its cargo capacity, and the Mazda3 doesn't disappoint in this regard, with plenty of space with the rear seats up or down. Unfortunately, the new cabin is let down by a weirdly shaped center armrest designed to accommodate a pair of cupholders, but the leading edge of the cover (where it's most convenient for the driver to rest his or her arm) is barely more than an inch wide. And speaking of small, a good portion of real estate in the gauge cluster is dominated by the speedometer – by comparison, the flanking tachometer and multifunction display are disappointingly tiny.

Even with its improved in-car tech and materials, Mazda has limited price increases on most Mazda3 models, even going so far as to lower MSRPs on some higher-end models like our i Grand Touring five-door tester. When it comes time to choose a trim level, prospective buyers will notice that the 3 comes in 11 build combinations just factoring in the engine choices, bodystyles and trim levels. That's a staggering number of combinations, but the biggest choice might be deciding between the sedan and five-door.


The manual Mazda3 now offers 29 mpg in the city and 40 mpg on the highway.

The sedan has the lowest price starting at $16,945, while the five-door starts at $18,945, in part because it comes with more content. In our estimation, the hatchback's added kit, cargo space and Infiniti-esque shape is easily worth the extra $2,000. Equipped with the Grand Touring trim level and various options, this tester with the smaller 2.0-liter four-cylinder engine rang in at $24,635, which is less than you'll pay for a Focus Titanium. Of course, if you load up a 2.5 S model with all the options (including some novel-for-the-class features like turning headlamps and head-up display), pricing creeps into the low-$30k range, which is at the top end for this class of car.

We had a chance to get behind the wheel of the 2014 Mazda3 twice before it went on sale, but both of those drives were focused on models equipped with six-speed Skyactiv automatic transmissions. For now, Mazda3 buyers looking to shift their own gears will be limited to the base Mazda3 i with the 2.0-liter four-cylinder seen here, although at some point, Mazda says the peppier 2.5-liter four will also be available with the manual gearbox. As for the base engine, we first got a taste of this Skyactiv mill on the previous-gen 3, and it returns almost untouched except for a slight bump in torque from 148 pound-feet up to 150 to go with its 155 horsepower. The biggest improvement year-over-year is in terms of fuel economy, with the manual Mazda3 now offering 29 miles per gallon in the city and 40 mpg on the highway – 2-mpg increases in both cycles. In a healthy mix of highway and city driving, we averaged a very impressive 37.7 mpg, and our time included a good amount of hard acceleration and cornering maneuvers. 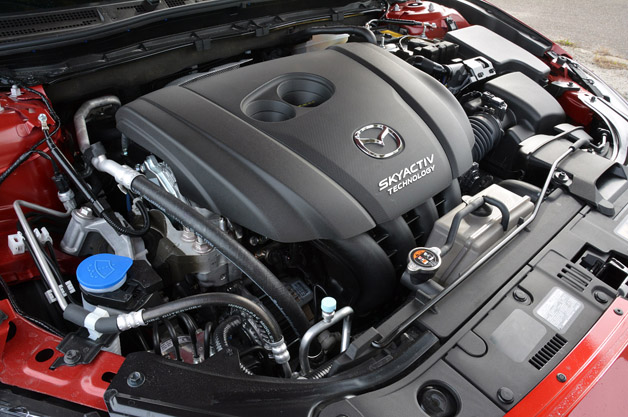 Enhanced stability and lowered weight is a great way to make an entertaining car even more so.

Since it first hit the scene in 2003, the Mazda3 has been a standout offering thanks to its nimble handling and predictable manners. Thankfully, the major changes made to the chassis have made it an even better driver's car. For starters, it now rides on a longer wheelbase and has a wider track, helping to make it more stable while cornering. Better still, in this configuration, the Mazda3 has also shaved about 100 pounds from its curb weight. Enhanced stability and lowered weight is a great way to make an entertaining car even more so.

Knowing how much fun the 3 can be when pushed hard made us appreciate its everyday driveability even more. Without making any groundbreaking chassis changes, Mazda says that it has retuned the suspension and brakes on this car, further contributing to its Jekyll and Hyde driving persona. Chief among the changes is an all-new steering system. The 2013 Mazda3 had an electro-hydraulic setup, while the new car switches to full electric. The tuning is spot-on, with effortless low-speed steering to go with great responsiveness and impressive amounts of feedback in sportier driving situations. Our only qualm with the Mazda3's performance out on the road was the amount of tire and road noise that makes its way into the cabin at just about any speed. 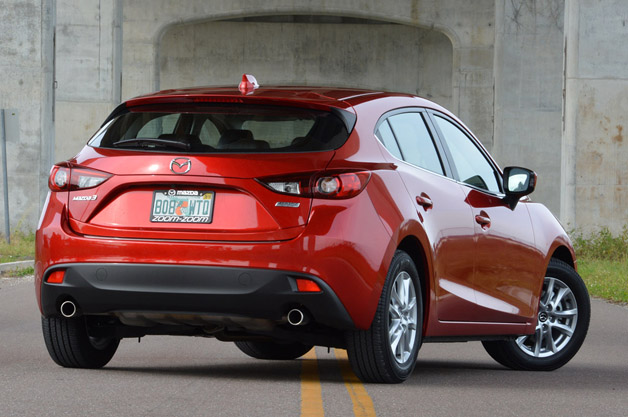 The 2014 model makes us fall in love all over again for being fun, fuel efficient and drop-dead gorgeous.

Mazda knows how to formulate a manual transmission, and the 3's self-stirrer is no exception. Even though this car will likely end up in the hands of first-time buyers just looking for good, affordable transportation, the six-speed manual gearbox provides plenty of enjoyment for driving enthusiasts, as well. Those looking for a sportier experience – without stepping up to the Mazdaspeed variant – might want to opt for the larger 2.5-liter Skyactiv four-cylinder found in the Mazda3 S. Not because of the 2.5's extra 29 horses and 35 lb-ft, but rather for the automatic transmission's Sport mode. Only offered on this engine, the Sport mode uses a g-sensor to tell if the car is being driven in a spirited manner, and, if it is, reduces unnecessary momentum-killing shifts while keeping the engine in the meat of its powerband.

In our First Drive of the Mazda3 hatchback, we specifically called out the previous-generation Toyota Corolla as the bane of this segment, but the truth is, buyers who opt for cars like the Corolla and Honda Civic seem to desire simplicity and ease-of-use over sportiness and aesthetics. Somehow, Mazda has managed to make the inside of the 2014 Mazda3 look and feel more mainstream while keeping the sporty and fun driving dynamics we've grown to love, wrapping it all up in an amazingly sleek and stylish form. The Mazda3 has always tugged at our heartstrings as the ultimate budget compact, but the 2014 model makes us fall in love all over again for being fun, fuel efficient and drop-dead gorgeous – all factors that should further cement it as Mazda's top-selling model while hopefully finding many new friends. Of course, with baseline talents like these, we can't help but daydream even more about the next-generation Mazdaspeed3... it can't get here soon enough. 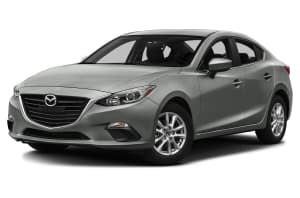