With the Tokyo Motor Show now behind it, the Japanese automotive industry is gearing up for the next big event. That'd be the Tokyo Auto Salon, Japan's equivalent to SEMA or Essen, set to take place at the Makuhari Messe in Chiba. Subaru has already announced what it has in store for the tuner expo, and now Honda has followed suit.

Most interesting of all the tuner concepts Honda has lined up are a pair of modified Vezel crossovers. The one pictured above is kitted out with parts from the Modulo catalog, while a second one is being prepared by Mugen (similar to the one recently leaked). Both look pretty sharp and hint at the possibilities in store for the Fit-based crossover that'll come to these shores with turbo power. 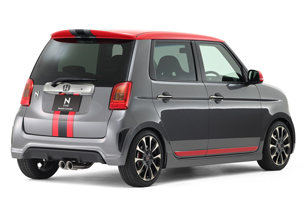 Honda is also displaying Modulo and Mugen versions of a number of other vehicles, including its N family of Kei cars, the new JDM Odyssey and the Fit. There's an N-WGN kitted out like a cookie delivery truck, an N-Box+ modified to look like an Element, a series of Ninja Turtles-inspired Grom motorbikes and an array of racing machinery. Check 'em all out in the gallery above and the press release below.
Show full PR text
Overview of Honda Exhibition at TOKYO AUTO SALON 2014 with NAPAC

TOKYO, Japan, December 25, 2013 - Honda Motor Co., Ltd. today will exhibit automobile and motorcycle models, which represent a variety of approaches to customization, as well as power products and motorsports racing machines at the TOKYO AUTO SALON 2014 with NAPAC*1, which will be held from Friday, January 10 to Sunday, January 12, 2014, at Makuhari Messe in Chiba Prefecture, Japan.

The automobile exhibition includes the following fun and varied models:
1) VEZEL Modulo*2 Concept, which further pursues a sense of high quality and sportiness of the new VEZEL, which went on sale in Japan on December 20, 2013 as a new vehicle that belongs to a new category of automobiles that fuses together multifaceted values at a high level.
2) MUGEN*3 VEZEL CONCEPT, a VEZEL-based concept model by MUGEN.
3) N-WGN Macaron Color Collection, which presents a "sweet spot" based on the N-WGN, the newest addition to N Series.
4) N-ONE Modulo Concept, for which Honda pays close attention to the details and realizes the ultimate fun of driving.
5) N-BOX + ELEMENT Concept, which was developed in the motif of "trail shoes" which can be used actively in urban areas as well as in casual outdoor activities.
6) Accessorized vehicles including FIT Special Customize, MUGEN FIT RS, MUGEN Odyssey Absolute, and others.
The motorcycle exhibition includes the following models:
1) GOLDWING F6C, which was exhibited at the 43rd Tokyo Motor Show in November this year.
2) CBR1000RR SP, which was exhibited at EICMA 2013 (Milan Show).
3) A customized concept model of the GROM, which was designed through collaboration with the Ninja Turtles*4, characters from a popular American cartoon.
4) Other customized models including the accessorized Little Cub 55th Anniversary Special.
The racing machine exhibition includes the following models:
1) RC213V, with which Honda won triple crown - rider's, team and constructor championships - in the 2013 MotoGP class, the highest summit of the FIM Road Racing World Championship Grand Prix.
2) CR-Z GT, with which Honda won the driver's and team championships in the GT300 class of the Super GT Series.
3) SF13, with which Honda won the driver's championship in the 2013 Japanese Championship Super Formula.
4) Four racing machines which will be used in the N-ONE One-make Race starting in 2014.
*1 Organized by the TOKYO AUTO SALON ASSOSIATION (TASA) with the cooperation of the Nippon Auto Parts Aftermarket Committee (NAPAC)
*2 Modulo: Brand name for customized products made by Honda Access Corporation, the manufacturer of genuine Honda aftermarket parts and accessories
*3 MUGEN: Brand name used by M-TEC Co., Ltd., which conducts motor sports activities and develops, manufactures and sells tuning parts for Honda vehicles as well as complete cars
*4 Ninja Turtles: Teenage Mutant Ninja Turtles (c) 2013 Viacom Overseas Holdings C.V. All Rights Reserved.