Is The Real Driving Simulator Still The Best? 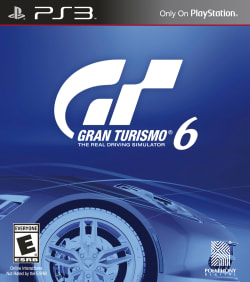 In the car world, there is a segment of the population that believes tried and true trumps what's novel or new most of the time. A car is a machine with a purpose – be it to deliver your kids to school or afford you the best lap time – and machines are better when they're less likely to fail. Or so the theory goes.

In the gaming world, that sentiment has almost never been true. Retro gamers, and "casual" gamers are changing this paradigm to a certain extent, but historically, newer has meant better when it comes to video games.

With the debut of Gran Turismo 5 in 2010, many believed that the most popular simulation-style racing game of all time had finally relinquished its title as the best, most advanced, mainstream sim racer. Even I, a dyed-in-the-wool GT fan, was forced to admit that Forza Motorsports 4 had caught up with the Polyphony Digital series in that generation.

Three years later, now in the midst of one of the single best Christmas-gift seasons for video games that I can recall, Gran Turismo 6 has arrived to re-light the fires of enthusiasts everywhere. It is, unquestionably, the deepest, most accurate and most entertaining iteration of the franchise to date. The question remains: is it good enough to keep loyalists from looking for kicks at the bleeding edge of technology, with a next-generation console?

Booting up Gran Turismo 6 is the gaming equivalent of grabbing your favorite old pair of jeans from the closet.

Booting up Gran Turismo 6 is the gaming equivalent of grabbing your favorite old pair of jeans from the closet: looks good, instantly comfortable and very few surprises await. From time immemorial (or 1998), it seems that I have been plunking down my first credits on some form of EK Honda Civic, dialing up the guys from the Sunday Cup, and beginning the business of creating another racing career.

Not ready to stray very far from the formula that has gotten it this far, GT6 kicks off with the same cocktail of gargantuan car and track selections with a true-to-life driving experience that we've all come to expect. There are, you'll quickly learn, more vehicles on offer (over 1,200) than any but the serially obsessed driver could ever hope to acquire and drive.

The track count has also jumped to include some 100 layouts at 37 locations, including 7 all new venues. I was absolutely stoked to see the inclusion of Willow Springs on the list of the new for GT6 – Big Willow is currently my favorite street course – and spots like Silverstone, Brands Hatch, Bathurst and the hillclimb at Goodwood are all brilliant inclusions as well. Oh, you can also drive on the frickin' moon, though I wouldn't recommend it more than once – the lunar rover has terrible tires. 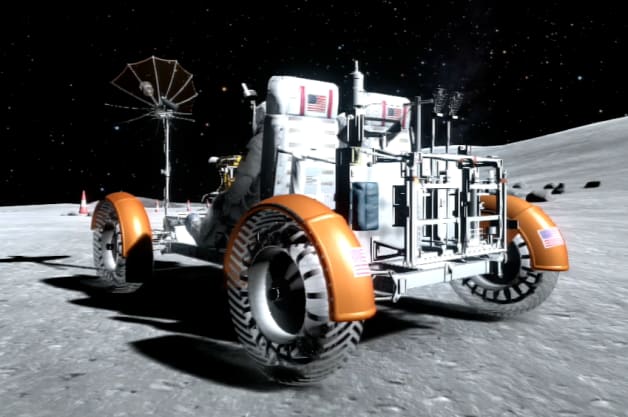 No other title feeds abject car mania quite so well.

But seriously, the sheer variety of gameplay is instantly GT6's biggest asset. I have heard and respect the opinions of those who complain that a car list bumped up by the inclusion of minor model derivatives (I count 56 flavors of Nissan Skyline/ GT-R) is somewhat disingenuous, but I disagree with them. Being spoiled for choice with races and racecars is something that I really love about this game, as I do finding just the perfect vehicle with which to attack a particular series. No other title feeds abject car mania quite so well.

A lot of the thousands of cars are accessible via good old-fashioned, hard racing work, too. Though the economy of GT6 can be pricey. While certain race wins and milestones achieved will still net you a free whip, fewer prize cars are available than in earlier versions of the game. That simply means bootstrapping funds from the sale of vehicles you've won is a slower process, and some of those multi-million-credit racecars and classic Ferraris will prove harder to attain.

As before, you can also purchase credits with real, actual American Dollars (insert your local currency here); they run $9.99 per million, or slightly cheaper if you buy in bulk. Still, the buying of credits to score a 1967 Ferrari 330 P4 would run you roughly $150 with some credits leftover. Long story short: I do not expect micro-transactions to be a big part of this game. Get to work. 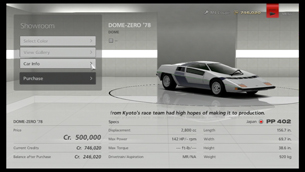 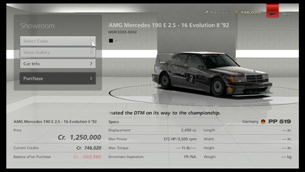 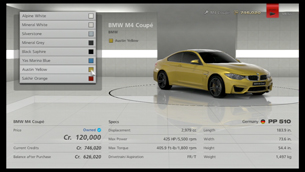 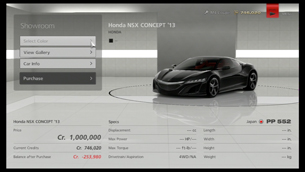 Actually doing the work of racing and winning is more satisfying and believable than with any Gran Turismo title past, thanks to a refined physics model being applied. As ever, slower, lower-powered cars allow one to work up a good understanding of the new way that rubber meets road, and first dabblings with monster power machines often lead to gloriously smoking crashes before you get the touch down. I've got a '70 Dodge Challenger R/T with almost 800 horsepower that I've nicknamed "Backwards" for the direction I often end up facing in it.

Of course, believable physics may dictate how much snap-oversteer I experience at the wheel of my mighty Dodge, but the repercussions of nosing it into a wall are still purely cosmetic. Damage is not 'mechanical' at all, and a scuffed car will cross the finish line just as quickly as a pristine one. I don't have a serious problem with the lack of damage as an option in the game, but its inclusion would have been a boon for those who crave something closer to iRacing levels of reality. Considering GT went to all the trouble of making a lovely new weather and astronomical simulation system, the exclusion of damage seems a bit illogical. What to fear from the rain if you can't wreck your car? Call it a missed opportunity.

Graphically, I'm pleased to report that all of the vehicles in Gran Turismo 6 have now been optimized for Playstation 3 (something that GT5 sadly could not say), and that the new tracks look pretty wonderful compared to the last effort. Still, this is one area where the more advanced technology clearly wins out; compare GT6 to Forza Motorsport 5 and the generation gap becomes blindingly clear. Even in it's own PS3 universe, GT6 doesn't seem like a full step beyond its precursor, but rather a slightly prettier version of the same basic game. 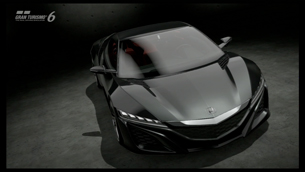 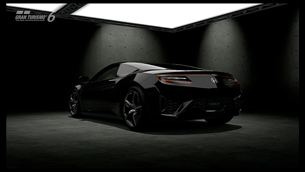 There's a ton of meat on the bone in this version of Gran Turismo.

Because of the robust and varied gameplay, I can overlook GT6's graphical deficiencies without much trouble, but the issue with the vehicle audio is still galling to me. Back in the halcyon days of GT2 and GT3, before I knew better, I considered the reproduced engine and exhaust sounds to be fairly acceptable. Unfortunately, for all of the obsession over the driving model, the folks at Polyphony still can't seem to make an audio track that sounds anything like what we hear in the real world. Completely recreating digital and audio models for each car is no doubt laborious – and something that capped out the Forza 5 team at around 250 cars for now – but the whispered tones of an engine at full boil do nothing to suspend my disbelief.

When it comes right down to it, is the less-than-cutting-edge Real Driving Simulator worth the $60 asking price? Or is it better to wait out most of 2014 ( best case scenario) for a Playstation 4-based Gran Turismo 7? Or is it best to grab the keys to a new Xbox One and Forza, and say the hell with GT altogether?

The answers to all those questions depend largely on your own predispositions and prejudices of course. But I think there's a ton of meat on the bone in this version of Gran Turismo, more than enough to see me through to the inevitable purchase of the next in the series.

Polyphony has been very smart so far in both its rollout of this game, and it's promise of consistently fresh content to come. The get of the Acura NSX Concept was a great one for the title. And Yesterday's near simultaneous debut of the 2015 BMW M4 coupe in real life and in GT6 was a meta moment of joy for car geeks like me (see the video above). Even for a guy who reviews BMWs for a living, reading the first official press release on a hot new model, and then driving it virtually on the same day was a total kick. The Gran Turismo crew is going to keep up a steady pace of surprise and delight by the looks of things, too, as the Vision GT project seems to have 26 more wild cars ready to follow the mighty Mercedes-Benz AMG Vision GT.


We'll table the rivalry until we see a PS4 GT.

Now that part of my daily bread is earned by reviewing driving video games, I feel compelled to reiterate the (rather obvious) sentiment that Gran Turismo 6, though very good, is not the best console driver in the world today. That title belongs to Forza 5, no matter how many cars, tracks and special events GT ultimately brings to the party. We'll table the rivalry until we see a PS4 GT.

Maybe I'm too much the guy who wants to have a low-tech classic car as a daily driver, but, lower tech be damned, I feel like I can still count on a big wallop of gaming fun packed in the GT6 case. Even spoiled for having both of the newest driving game titles under my roof at the same time, I know that Gran Turismo will be spinning in my Playstation with great regularity over the next weeks and months. Loyalists will follow me there, and true car nerds should think twice before passing on the embarrassment of variety herein, 56 GT-Rs or no.