Jaguar F-Type Coupe Puts Brit Brand Back In The Hunt

David Kiley
Jaguar Cars, left for the crows and buzzards by Ford a few years ago, is turning the corner like a race car driver with its wheels firmly planted on the asphalt. The latest sign: the utterly gorgeous F-Type coupe that the British company unveiled at the Los Angeles Auto Show.

I am surprised at my own enthusiasm for this car. Earlier this year, I drove the F-Type convertible around Spain. I was impressed, but not bowled over. It was fun, sporty, well assembled and sexy. But the coupe improves on the F-Type roadster like a beautiful Dior gown improves the look and visual impact of an already beautiful fashion model.

The F-Type, as its name suggests, is trying to draw a line of emotion and heritage with the iconic Jaguar E-Type. The F-Type roadster convertible just didn't get me there. The coupe, though, with the sumptuous lines of the roof and cowl playing to the hood--and giving the hood a longer, sexier line that absolutely makes me think of the fabulous E-Type--is everything I am looking for in a sexy sports car that will lighten the wallet of $65,000-$100,000.

"This is the car I've been waiting for for 45 years," said Jaguar design director Ian Callum. Callum, 59, is considered one of the leading designers in the industry. The F-Type coupe won't be the last car he ever designs, but it may be the one that he is best remembered for when he hangs up his pencils. 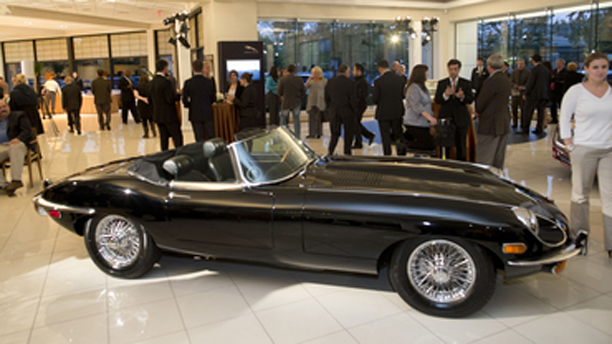 Both V6-powered F-Type coupes are priced $4,000 less than their roadster counterparts introduced earlier this year. The 340-hp supercharged 3.0 liter V6 starts at $65,000, an aggressive starting price for power and packaging utterly sufficient to enjoy such a beautiful piece of eye candy. That base model will hit 60 mph in just 5.1 seconds as it moves up the spedometer to a 161-mph top speed. You can punch the power up to 385 hp with an upgraded engine, but it will run your ticket up to $77,000. The F-Type R Coupe, which gives the owner 550 horsepower from a 5.0 liter super-charged V8, will run you $99,000 before you add a few extras. The exhaust growl on this engine is enough to make you want to record it and play it back through the car's stereo system. To assuage concerns that a two-seater is just too impractical for even the most comfortable of bank accounts, Jaguar made sure to create a trunk space that will swallow up two full-sized golf bags. Fore! We are playing through...with gusto! Jaguar, Land Rover and Range Rover are three British brands managed together. Married up by Ford in the last decade when the Dearborn automaker owned them, the three are now managed and owned by Indian automaker and industrial conglomerate Tata. Undistracted now by Ford's shifting business priorities that retarded Jaguar/LandRover's development, the two businesses are breaking out with focused attention and investment by Tata, and reestablishing themselves as serious profitable niche luxury brands. Sales of Jaguar are up 36-percent year-to-date through October 31, and LandRover/range Rover sales are up 14-percent. As Mercedes-Benz, BMW and Audi continue to grow sales volumes and expand product lines below the $30,000 level, Jaguar, as well as Land Rover, is hoping that it has timed its renaissance to a growing luxury consumer looking for a bit more exclusivity. "We really feel we have the product, as well as the service record now (Jaguar was named number-one brand in J.D. Power's Sales Satisfaction Index) to excite luxury buyers like never before," says Jaguar vice president and brand chief. Jaguar will advertise on this February's Super Bowl for the first time. "It's a big stage, but we are ready for it," said Curry.