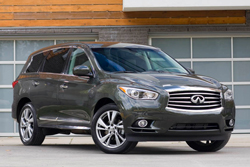 Nissan may be forced to recall 110,000 Pathfinder and Infiniti JX35 crossovers, due to a number of customer complaints. Consumers report suddenly losing power, with repair facilities blaming the issue on faulty transmission cooler line connections. Both the Pathfinder and JX35 use a continuously variable transmission. As of right now, the only vehicles being investigated are from model year 2013.

Nissan has been cooperating with the National Highway Traffic Safety Administration, according to a report from Reuters, and it has developed a fix for the affected vehicles. It's not clear whether this will develop into a full-blown recall, as there have been no known cases of injuries or crashes. But with a potential 110,000 vehicles prone to sudden power loss, a recall seems to be a likely outcome.