Brandon Turkus
Ford had a bit of a recall spree around this time last year, with a pair of issues on the then-new 2013 Escape, followed by a recall of 423,000 2001 to 2004 Escapes because they might accelerate of their own accord. Accordingly, Uncle Sam pasted Ford with a $17.35 million fine because it took too long to inform customers, according to a report from Automotive News.

Ford agreed to settle with the National Highway Traffic Safety Administration, accepting the fine but not admitting fault. The recall, which afflicted Escapes with the 3.0-liter V-6 along with 217,000 Mazda Tributes from 2001 to 2006 and 2008, was due to faulty gas pedals that could stay down after a driver removed their foot.

Ford issued a statement regarding the fine, saying, "We take the safety of our customers seriously and continuously evaluate our processes for improvements. While we are confident in our current processes for quickly identifying and addressing potential vehicle issues, Ford agreed to this settlement to avoid a lengthy dispute with the government." 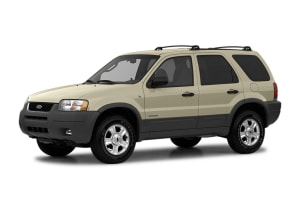