Michael Harley
View All Specs
Ignore the naysayers who say the Audi R8 is too refined to be a proper supercar, or that it has begun to show its age - after a few tweaks for the 2014 model year, the automaker's flagship remains one of my favorite exotics.

Audi has treated all of its R8 models to a host of enhancements for the 2014 model year that include new LED headlights and tail lamps, larger steering wheel-mounted shift paddles, new exhaust finishes, updated alloy wheel designs and fresh exterior colors. However, the most significant news is the arrival of a proper seven-speed S-Tronic dual-clutch automatic transmission (it replaces the six-speed R-Tronic). The rapid-fire gearbox shaves a coupe tenths off the 0-60 sprint and improves fuel economy for both the eight- and ten-cylinder models (thankfully, a traditional six-speed manual is still on the order form).

I recently spent time with the new-for-2014 V10 Plus model, which is only available in a coupe body style. Compared to the standard V10 models, the Plus sheds upwards of 130 pounds thanks to lightweight manual seats (not fitted to my test car), carbon-ceramic brakes, reduced sound bay insulation, a smaller fuel tank and an assortment of carbon-fiber pieces (including side blades, front splitter, rear diffuser and spoiler). But that's not all, as the V10 Plus also receives a bump in output that pushes its ten-cylinder to an even 550 horsepower. 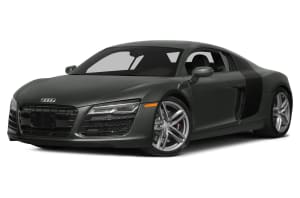