NHTSA questioning GM over adequacy of past recall... again

Chris Paukert
The National Highway Traffic Safety Administration appears to be feeling its oats lately. It recently urged Chrysler to recall some Jeep models over gas tank safety issues, and while the Auburn Hills automaker resisted in very public fashion, the government agency eventually got what it wanted. Now it's turning its gaze upon General Motors, wondering if an existing recall of 8,000 Pontiac G6 models for a brake light issue should have been exponentially larger – some 551,000 vehicles.

GM recalled those 8,000 Pontiac models in 2009 after NHTSA logged some 212 complaints of brake light issues on 2005 and 2006 models. But now, NHTSA has reportedly collected 314 complaints of similar issues in 2005-2008 models, and GM itself admits to receiving 1,104 complaints and about 14,400 "'potentially related warranty claims.'" These expanded findings have triggered an engineering analysis, a situation that The New York Times says is likely to result in a recall, though the outcome is not a certainty.

As NYT points out, this "is the third time this year NHTSA has challenged the adequacy of GM recalls." Back in June, NHTSA cajoled The General into adding nearly 200,000 GMT 360-based SUVs to an existing electrical fire risk recall, and it also announced an investigation into the Chevrolet Camaro, Cruze and Sonic for airbag issues. GM has already recalled 6,900 examples of these vehicles, but NHTSA is looking at around 400,000 units. 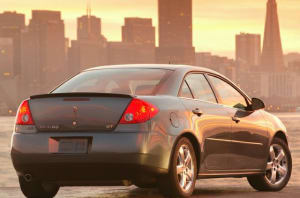