The grain of salt one should take this post with is that Wayne Gerdes is just one man, and that his personal test results may not be applicable to everyone. Still, Gerdes is well-known in the green car community – his Guinness World Record for lowest fuel consumption in a hybrid and his position as owner of CleanMPG are just two good reasons – so when he and his crew tested a Ford C-Max Hybrid, the results are worth paying attention to. Turns out, they couldn't get anywhere near the EPA's claimed efficiency numbers.

Already the subject of a class action lawsuit over fuel economy claims, the C-Max Hybrid officially gets 47 miles per gallon across all three of the EPA's test categories (city/highway/combined). Plenty of people have questioned whether 47 mpg is an accurate real-world number, and Gerdes' discovered that the C-Max Hybrid doesn't always reach the lofty EPA levels.

During a recent test in the sunny southwest, Gerdes and crew discovered the C-Max only managed 35.537 mpg over 360 highway miles but did get 52 mpg over 22.8 miles in the city. The drive was a comparison test with the Toyota Prius V, which is rated at 44 mpg city, 40 highway and 42 combined, and the V handily beat the C-Max, despite its lower EPA numbers.

Along the same route, the Prius V got 40.768 mpg on the highway and 55.8 mpg in the city. Gerdes wrote, "While the C-Max did beat its EPA city result, it fell woefully short of besting the lower fuel economy-rated Prius V revealing that the C-Max fuel economy claims beyond that of the Prius V are not what we were meant to believe." Motor Trend also found the Prius V beats the C-Max.

Gerdes is incredibly careful to take notes and pictures to document his tests (as we learned in person a few years ago), so we trust his results with the C-Max. Gerdes explained to AutoblogGreen that:

Given we are coming up on Spring training, here is a baseball analogy. With a neatly appointed interior and fastball-like performance, there is a lot to like about the all-new 2013 Ford C-Max. From a cargo carrying standpoint however, the design team took a swing and missed when compared to the Prius liftback and Prius V in particular.

In addition, it appears Ford's engineers and marketing team are in the unenviable position of simply being too far out ahead of a the curve when compared to anything in the entire Prius family lineup. The Fuel Economy curve, that is. Hopefully the Ford team will keep their eyes on the ball so that the next iteration will supply owner satisfaction from the standpoint of the C-Max's strengths while also providing a lot less pain at the pump. Right now, they appear to be getting called "out" by all the umpires well before reaching home.

When it was launched late last year, the C-Max Hybrid started with incredibly strong sales, and some drivers are certainly able to get 45+ mpg. Still, the automaker and the EPA are in discussion about potentially changing test procedures for hybrid vehicles and the lawsuits continue. You can read all of the details of the CleanMPG C-Max Hybrid MPG test here. 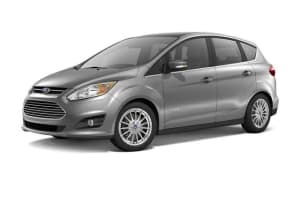