View All Specs
Add a Review
Polished Utility Impresses, Just Not At The Pump

With its subtle badging out of sight, and from a distance greater than 30 feet, Volkswagen's flagship Touareg Hybrid can hardly be differentiated from its entry-level Touareg V6 sibling. But pop the hood or take it for a quick spin, and the gasoline-electric utility quickly reveals itself as one of the most complex vehicles ever to grace the German automaker's showroom.

Predictably, there is always downside to such technical wizardry. Comprehensive development and revolutionary components, including a large nickel metal-hydride battery pack, don't come cheap. As a result, the Touareg Hybrid is the most expensive vehicle in today's Volkswagen lineup, with a base price eclipsing the standard Audi Q7, BMW X5, Mercedes-Benz M-Class and even the Porsche Cayenne.

So why would someone spend more than $60,000 to put this particular Volkswagen in his or her driveway? To answer that question and to learn more about the automaker's flagship softroader, we spent a full week with it.

Volkswagen's Touareg Hybrid is one very complicated machine. To best understand it, one needs to back up a few years and take into account Volkswagen's ongoing relationship with Porsche. Before both became siblings under the umbrella of the VW Group, the two were working together to develop a hybrid on their shared first-generation SUV/ crossover platform (sold as the VW Touareg, Porsche Cayenne and Audi Q7). Early gasoline-electric prototypes emerged in early 2009, and we were fortunate enough to get seat time in Porsche's Cayenne Hybrid prototype in March of that same year. Consumers, however, weren't allowed behind the wheel of a production Touareg Hybrid until the 2011 model year when the SUV rolled into showrooms on a shared second-generation platform (Porsche rolled out its mechanically identical Cayenne Hybrid around the same time).


Volkswagen has positioned its new Hybrid at the top of its food chain.

Volkswagen has positioned its new Hybrid at the top of its food chain – a flagship of technology and innovation – with a base price for the 2012 Touareg Hybrid of $62,865 (including a $870 destination fee). That figure not only makes it Volkswagen's most expensive offering today (the W8-powered Phaeton sedan's last year was 2006, and it departed with a base price of $68,655), it slots well above the base price of the standard naturally aspirated Touareg V6 ($44,245) and Touareg TDI ($47,745) models.

The sticker is a bit easier to swallow when consumers realize that the Hybrid arrives loaded with just about everything as standard equipment. The upgrades over lesser Touaregs include Vienna leather upholstery, walnut trim, 12-way power seats, an eight-inch touchscreen navigation system, Bluetooth audio and smartphone connectivity, panoramic moonroof, keyless access and start, 19-inch alloy wheels and much more. This loaded Touareg Hybrid is effectively a halo model for the Volkswagen nameplate, and its low volume (less than five percent of sales) ensures its exclusivity. For lack of a better comparison, consider it today's version of the discontinued (yet memorably awesome) Touareg V10 TDI.

Volkswagen touts its Touareg Hybrid as the world's first gasoline-electric hybrid with a forced induction engine. As such, combustion power comes in the form of a supercharged 3.0-liter V6 generating 333 horsepower and 325 pound-feet of torque (it's the same basic engine found under the hood of the Audi S4 and several other models). Supplementing the gasoline engine is a 47-horsepower electric motor, pulling its energy from a 288-volt nickel metal-hydride battery pack fitted beneath the luggage compartment (the battery consists of 240 individual cells and offers an energy density of 1.7kWh).


Volkswagen touts its Touareg Hybrid as the world's first gasoline-electric hybrid with a forced induction engine.

Things get much more innovative at this point, as the standard eight-speed torque-converter automatic transmission is separated from the engine by a decoupling clutch – electronics are able to completely sever the ties between the engine and transmission on demand, thereby allowing the Touareg Hybrid to "coast" (glide free of engine drag) to improve efficiency. Lastly, Volkswagen's 4Motion permanent all-wheel-drive system, with a limited-slip Torsen differential, sends the power to all four wheels with a standard torque split of 40:60 (front:rear) on dry pavement.

The Volkswagen Touareg Hybrid's curb weight is a hefty 5,135 pounds, but the combined power rating of the system provides an impressive 380 horsepower and 428 pound-feet of torque. The powertrain does its best to negate the mass. Pedal to the carpet, the five-passenger utility will hit 60 miles per hour in just over six seconds flat with very little drama, making it VW's quickest Touareg, quicker even than the aforementioned V10 TDI model.

But the Touareg Hybrid isn't just a new powertrain shoehorned into an internal combustion chassis. Volkswagen has enhanced the brakes to accommodate this model's additional weight and power. The stoppers are upgraded with six-piston monobloc calipers in the front (14.2-inch rotors), and the rear wears four-piston monobloc calipers (13.0-inch rotors). The suspension, with fixed damping and a single ride height, features upper and lower control arms with coil springs up front and a multilink design with coil springs in the rear. Nineteen-inch alloy wheels wear 265/50R19 all-season tires at all four corners.


We found its hybrid mannerisms predictable, its talent and poise commendable, but its fuel economy less than impressive.

Based on the week we spent with Volkswagen's largest hybrid, we found its hybrid mannerisms predictable, its talent and poise commendable, but its fuel economy less than impressive.

The Hybrid boots up almost silently after a press of the start/stop button (one may also insert the key into a redundant slot in the traditional fob slot). As the electric motor and combustion engine are able to run both independently or together this Touareg will choose pure electric mode (EV) if hard acceleration is not called for and the battery pack is sufficiently charged. Volkswagen says the Touareg Hybrid is capable of cruising at up to 30 mph in EV mode, though we had trouble keeping the gasoline-fed V6 from firing up with even light pressure on the accelerator.

Like its standard non-hybrid siblings, the Touareg's mid-size five-passenger cabin is very comfortable. The all-black upholstery and black dash in our tester was a bit dour and ominous looking, but the lighter wood and splashes of bright aluminum offered a welcome contrast. Adults found the second row comfortable with air vents in the center console, and the cargo area is cavernous and easy to load (kudos to VW for putting a metal scuff plate at the top of the bumper).


Forgetting the fuel economy issue and punching the throttle really brings the Hybrid to life.

Cruising sedately on the highway was a no-brainer, but almost boring, as this Volkswagen has an underlying sporty demeanor. Forgetting the fuel economy issue and punching the throttle really brings the Hybrid to life. The torque of the combined system is very strong, with a very linear power delivery. We applaud VW Group for sticking with a traditional torque converter automatic gearbox with its hybrid, as it cracks off firm shifts with a nice solid feel that no continuously variable transmission will ever be able to match. Without question, we found the Hybrid fun to drive.

Like other hybrids, the Touareg Hybrid utilizes regenerative braking to recover energy back into its batteries. We didn't feel the heavy drag common to many other gasoline-electrics under deceleration. The VW also features a standard start-stop system, to conserve fuel while at a red light or stopped for more than a few seconds.

Unlike other hybrids (with the exception being its near-twin Cayenne Hybrid), the Touareg Hybrid is able to electronically disengage its transmission from the engine when the throttle is lifted at higher speeds. This special "coasting" mode works brilliantly and without any operator input (the only way the driver knows it's working is by keeping a close eye on the tachometer as it drops to zero).


Most consumers would be hard-pressed to realize that they are driving a hybrid.

Along those lines, most consumers would be hard-pressed to realize that they are driving a hybrid. Most of our passengers couldn't tell the difference from the second row (of course, anyone behind the wheel would have to overlook the bright green "READY" script in the center of the primary instrument cluster). The soundtrack from the supercharged V6 is also pleasant.

Overall, the ride is firm but still very comfortable. Body roll is minimal, with the all-season tires being the Touareg's Achilles Heel. The Porsche Cayenne Hybrid is understandably meant to be the more athletic sibling of the two.

Braking is also very strong, thanks to the massive rotors and strong calipers. Unfortunately, and this is another issue common to all hybrids, there is a small feeling of disconnect introduced by the regenerative braking system. We wouldn't say the brakes felt weak or untrustworthy, but there is a millisecond between pedal application and the firm braking feel we have grown accustomed to in other VW products. On the other hand, the variable-ratio electric power steering felt good whether tracking straight on the highway, negotiating city streets or maneuvering in a parking lot.


The Touareg is more of a speed demon than a frugal pacifist.

Despite the fashionable blue and chrome "HYBRID" badging on the rear decklid that telegraph miserly fuel consumption, we found the Touareg more of a speed demon than a frugal pacifist. Its EPA fuel economy rating is 20 city / 24 highway, and we averaged just over 18 mpg overall during our week. Compare that to the standard V6 (16 city / 23 highway) and the TDI (19 city / 28 highway) and the hybrid advantage is slight, if any. In fact, we suspect that the oil-burning TDI model – our hands-down favorite in Volkswagen's Touareg lineup – will very likely consume less fuel overall and offer much greater highway range. Plus, it stands to accomplish both with far less complexity.

After seven full days, we found ourselves impressed with the 2012 Volkswagen Touareg Hybrid. The more we learned about it, the easier it became to marvel at the technology concealed beneath its steel skin. This VW is much more than a solid unibody platform containing a comfortable five-place interior. It's a low volume flagship with a unique powertrain developed with Porsche and sold as a halo vehicle. Its objective is not to be our favorite Volkswagen, but to be the most avant-garde and innovative model in the company's portfolio. And with that as its objective, it succeeds. 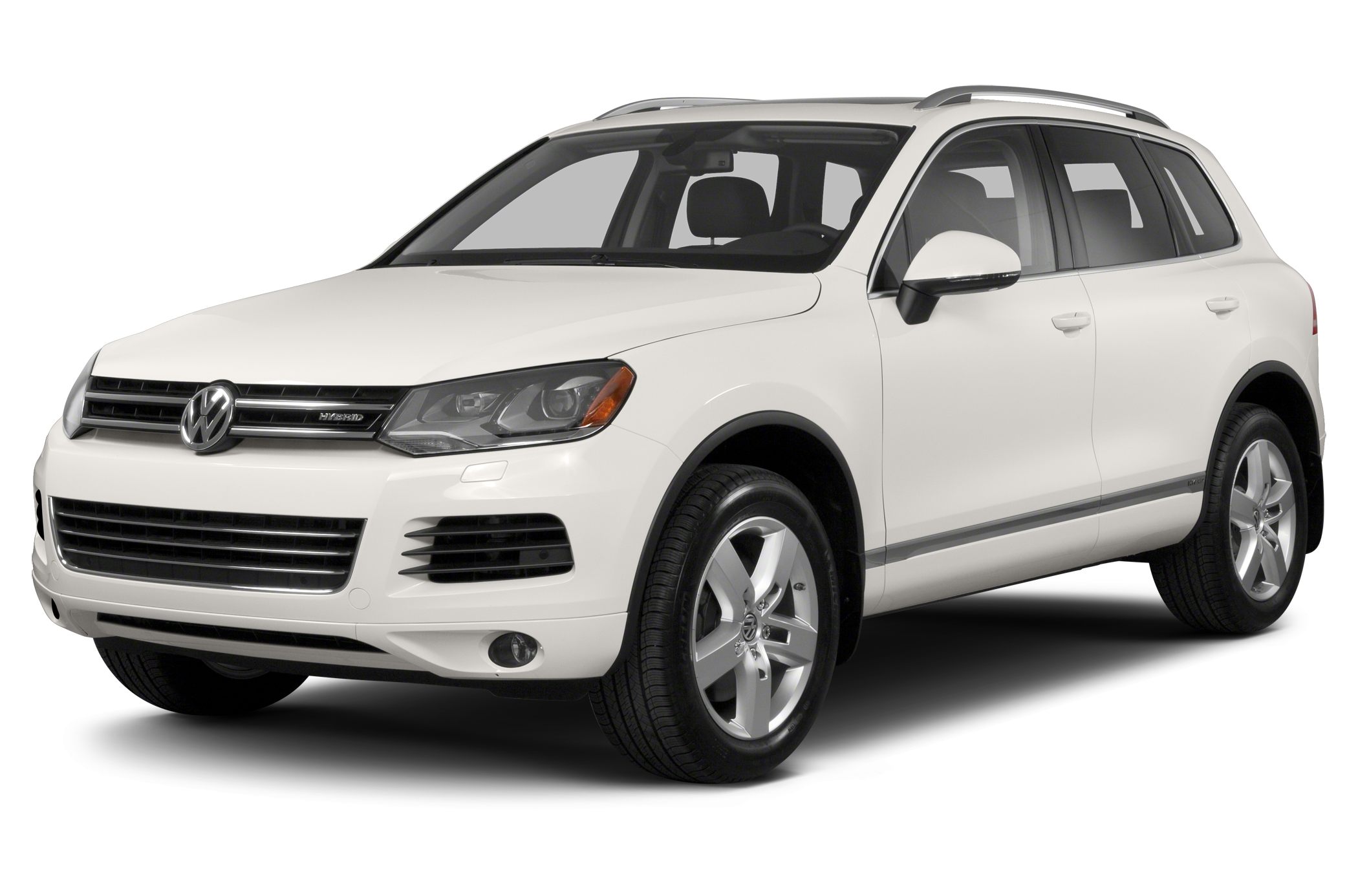