We would never kick a 450-horsepower convertible out of bed, especially one as pretty as the 2013 Audi RS5 Cabriolet. We'll admit, the chrome wheels aren't really doing it for us – we much prefer the standard alloys – but nevertheless, there's a lot to like about this topless Audi.

Most importantly, the RS5 Cabriolet still uses Audi's naturally aspirated 4.2-liter V8 that's being discontinued elsewhere in the company's lineup. We adore this high-revving, fire-breathing engine, though we'd like it more if it were mated to a six-speed manual transmission rather than the car's standard seven-speed S-tronic gearbox. Still, the all-wheel-drive convertible can sprint to 62 miles per hour in just under five seconds on its way to a top speed of 155 mph (or 174 mph if you ask Audi nicely to remove the limiter).


While speaking with Autoblog at the Paris Motor Show, Scott Koegh, President of Audi's U.S. operations, confirmed the Cabriolet will arrive Stateside in the first quarter of 2013 as the newest member of the RS5 family.

"That car is a no-brainer," Koegh said. "We think our RS strategy fills the brand. We think adding this high-performance attribute is huge. TT RS is a classic example. The car sold out and rock-and-rolled extremely well."

The car goes on sale in Germany next summer, priced from €88,500, or about $111,500 based on current exchange rates. At this point, it's unclear whether the convertible will carry a 2013 or a 2014 model year designation, but we're banking on the latter as the Coupe model is already on sale here as a 2013. We're also guessing it'll be lot cheaper when it comes to America, however – the Coupe, which is already on sale, retails for under $70,000. Scroll down for the full press release.

Zach Bowman contributed to this story.

Audi range expands yet again to include potent new V8 convertible
One of the stars of this month's Paris Motor Show (Sep 29 to Oct 14 2012)
4.2 FSI engine with 450PS, zero to 62mph in 4.9 seconds, 25.9mpg
Elegant and spacious body with lightweight cloth soft top

As the UK basks in Indian summer sunshine Audi has just very appropriately removed the wraps from its most exhilarating RS convertible to date – the new 450PS RS 5 Cabriolet. Complementing the beauty and brawn of the RS 5 silhouette with a fast-acting lightweight fabric roof the new open-top will arguably offer the very best environment in which to savour the red-blooded 4.2-litre V8 shared with the RS 4 Avant. The new RS 5 Cabriolet opens for UK ordering in late 2012, and deliveries are expected to begin here next spring.

The lightweight 'acoustic hood' of the RS 5 Cabriolet offers a degree of sound absorption that runs its fixed head counterpart remarkably close, and at the press of a button opens and closes fully automatically in 15 seconds and 17 seconds respectively – even when driving at speeds of up to 31mph.

When open, it hardly affects the size of the spacious luggage compartment – it only requires 60 litres of its 380-litre total volume. The split rear seatbacks can be folded down individually, and a through-load facility from the boot to the rear seating area maximises versatility. Special reinforcements contribute to the convertible body's high rigidity, and aluminium front wings compensate for some of the added weight of the reinforcements.

Not surprisingly the body benefits from the same subtle revisions that brought the RS 5 Coupe into line with new generation A5 models earlier this year. Styling updates include a slight revision to the single frame grille design, sharper and more pronounced bonnet contours, new 'solid band' wraparound LED daytime running lights and LED rear lights, new look front and rear bumpers and 19-inch wheels in a new '10-spoke' design. In the Cabriolet, a subtle matt carbon fixed spoiler lip on the boot lid boosts downforce – this can be body-coloured if required.

All assistance systems offered in the A5 model line-up are available as options in the RS 5 Cabriolet as well, including adaptive cruise control which is capable of initiating full brake application in an emergency situation, Audi side assist blind spot monitoring and the Audi active lane assist lane departure warning system. The standard parking system plus with front and rear sensors can also be extended to include a reversing camera.

In the multimedia field, the headline news is the Mobile Phone Preparation – High with Audi connect option, which lets passengers surf the web with their mobile devices via an integrated WLAN hotspot and also offers everything from Audi traffic information online to navigation with Google Earth images and Street View.

As in the Coupe, the high-revving, naturally-aspirated 4.2-litre V8 that is hand built for the RS 5 delivers 450PS at 8,250 rpm and peak torque of 430 Nm at between 4,000 and 6,000 rpm. It powers the Cabriolet from rest to 62mph in 4.9 seconds, and where possible can take it to an electronically-limited 155mph top speed, which at extra cost can be elevated to 174mph if desired. Thanks to a combination of technologies from the Audi modular efficiency platform, including a recuperation system, the high-tech V8 can also deliver real world fuel economy, with up to 25.9mpg possible according to the combined cycle test.

New electromechanical power steering which demands no input from the alternator while in the 'straight-ahead' position works in favour of efficiency, as does the familiar seven-speed S tronic dual-clutch transmission with its long top gear, lightning-fast shifts and steering wheel paddle control.

Permanent quattro all-wheel-drive smoothes out power delivery, and is backed up here by torque vectoring, the crown-gear centre differential and the rear sport differential for even more stringent protection against traction losses and split-second allocation of torque between the front and rear axles and the rear wheels. Up to 70 per cent can flow to the front or as much as 85 per cent to the rear, as necessary. The default 40:60 ratio of the rear-biased configuration ensures sporty handling.

The body is 20 mm lower than that of the Audi A5 Cabriolet; its mounts are stiffer, and its anti-roll bars are larger and firmer. Five-link front and self-tracking trapezoidal-link rear suspension with very high lightweight aluminium content imparts great agility, and large, internally-ventilated wave brake discs with eight-piston callipers instil complete confidence.

Carbon fibre-ceramic brake discs are also available at extra cost, as is the Dynamic Ride Control (DRC) system, which uses diagonally opposed pairs of shock absorbers linked by hydraulic lines and a central valve. During fast cornering, the system intensifies the stabilisation of the front outside wheel for optimum stability and composure. Its response can be varied across three settings at the touch of a button.

A dynamic steering option is also available for integration into the standard Audi drive select adaptive dynamics system, enabling the actual ratio of the steering to be varied according to the four Audi drive select settings comfort, auto, dynamic and individual. When the dynamic steering option isn't specified, the system can apply these same four settings to the steering weighting, along with the S tronic transmission's shift points and the throttle's response. It can also modulate the distinctive, bass-heavy sound of the exhaust system. A sports exhaust system, identifiable by its black-coloured tailpipes, can be specified at extra cost to deliver even richer sound.

Customer deliveries of the Audi RS 5 Cabriolet will begin in early 2013 in Germany, where its base price will be 88,500 euros (£70,154 as at 6.9.12). UK-specific pricing has yet to be confirmed and will be announced nearer to the start of customer ordering later this year. 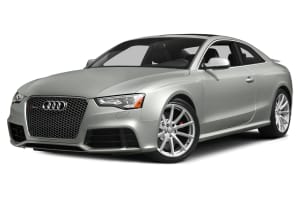