View All Specs
An Engine Upgrade Is Our Sort Of Bling

Admittedly, when GMC invited us to drive the new 2013 Terrain Denali, the summons did not incite argument over which one of us wanted to attend as much as trigger flashbacks to Envoy Denali and Diamond Edition Jimmy models. It's not that we are averse to the "Professional Grade" version of the Chevrolet Equinox. In fact, we like this second generation of the Theta-platform crossovers just fine. It's just that, collectively, midsize crossovers are about as exciting as watching sun tea brew. And this wasn't even a new vehicle, just a familiar trim package being pushed further on down the product line. The Denali badge has become something of a right of passage for GMC vehicles approaching that awkward, no-longer-new phase of their lifecycle. Special grille and extra chrome trim? For sure. Upgraded interior? Check. A new powertrain? Now they had our attention.

So we hopped into our long-term Mini Countryman and headed north. Pulling into our hotel in Traverse City, Michigan, we were presented with our test vehicle. A loaded, all-wheel-drive model with a V6, the 2013 Terrain Denali we drove retails for $41,720, including delivery. That's over $15,000 more than the list price for the cheapest 2012 Terrain, representing a 58-percent upsell. Of course, you don't have to drop forty large for a Terrain Denali – base MSRP is $35,350 for the four-cylinder, front-wheel drive model.

If you're curious how the Denali badge can be applied to such a grocery getter, consider the following: Over a quarter of all GMC vehicles sold are Denalis. For the seven-seat Acadia, the most recent model to get the Mount McKinley treatment, that ratio is more like one in three. ( Acadia Denali doesn't even get any hardware upgrades, by the way.) Further, we were told GMC is currently selling some 70 percent of Terrains with four-cylinder engines. So it only makes sense that GMC would sever the conventional relationship between top-level trim and top-of-the-line powertrain.

The good news is that sword cuts both ways, as the new 3.6-liter direct-injected V6 we found under the hood of our Denali will be available in other Terrain trim levels as well. In the Denali, it's a $1,750 option that comes bundled with 19-inch chrome wheels. We can say definitively that this version of the General Motors corporate engine is a major upgrade for the 2013 Terrain. With 301 horsepower and 272 lb-ft of torque, the new V6 boasts 14 percent more horsepower and 23 percent more torque than the old 3.0-liter V6.

While the old model would do 0-60 miles per hour in just over eight seconds, the upgraded V6 with all-wheel-drive should enable the 2013 Terrain to hit 6.7 seconds, according to GM. But it's not just a numbers game, as the new V6 feels and sounds powerful, with a refined roar under acceleration. Yes, GM has finally equipped the Terrain with the torque necessary to motivate its roughly two-ton curb weight with authority.

While the engine's power is satisfying, so too is the transmission. The six-speed automatic seems tuned for drivability more than fuel economy – a refreshing change from many vehicles we test these days. Our Denali would hold gears well past 4,000 rpm, even under part-throttle application, which probably explains why we saw only 18 miles per gallon displayed on the trip computer after our brief jaunt. ( EPA numbers will be 16 city and 23 highway, according to GM.) Yet even as the Terrain felt responsive, full-throttle acceleration could stymie the all-wheel-drive system, which sometimes seemed slow to transfer power rearward.

Denali models get exclusive Mando Dual Flow Dampers, which we've seen before in Hyundai and Kia models like the Sonata and Sorento. This type of shock employs a trick valve that can vary the rate of oil flow based on how quickly the piston is moving and thus how much force it is generating. In the quest to improve ride quality, this mechanical system is said to ride softer over both small bumps and very large ones, while delivering a firmer ride for better handling the rest of the time. While we were not given the opportunity to drive a standard Terrain without the new DFD suspension back-to-back with a Denali, the DFD-equipped vehicle indeed felt firmer than we remember from the last time we got behind the wheel of the Terrain.

Unfortunately, any notion of sportiness intimated by the suspension will be kept at bay by the Terrain's steering. Despite the V6 models having hydraulic power steering, the Terrain we drove felt like it had an electric power steering unit – and a poorly tuned one at that. In dynamic situations, we found little relationship between the effort needed to turn the steering wheel and the amount of force the pavement was exerting on the tires, and in straight line driving, the wheel center position just had far too much play.

While we love the new engine and aren't entirely unhappy with the rest of the Terrain Denali's mechanical package, when it comes to the aesthetics, the best we can do is say we're impressed that GMC thought to use satin chrome instead of the more gaudy kind. Honestly, in its three model years, the Terrain's T-square exterior styling has never really grown on us. It's actually had quite the opposite effect, making us think that a facelift or redesign can't come soon enough. This isn't it, as the Denali's big exterior changes – that "signature" grille, body color rocker panels with chrome accents, chrome exhaust tips and wheels, and slightly different headlights and taillights – don't really address the cartoonishness of the Terrain's fenders. Of course, GM would likely object to our displeasure with the unique look of the Terrain, no doubt pointing out that sales are up 13 percent through May. Yes, if the Terrain is your cup of tea, GMC will be happy to serve it to you. And of course, you do take chrome and leather, right?

Inside, the Denali has a nice looking soft-touch dash pad, a wood-trimmed steering wheel, a leather armrest, matching wood and leather door inserts, illuminated sills and the obligatory Denali logo embossed in the leather seats. The interior changes are as subtle as they are on the exterior, but they're nice. The Terrain has one of GM's better interiors already, and though the angle of the dash can create glare issues on the navigation screen, its controls are mostly logical and well placed. Of note is that the power door lock button on the center stack has been supplemented with redundant door buttons. New owners can thank the early adopters for complaining.

As might be expected, the Denali version of the Terrain includes most of the model's optional equipment as standard, including lane departure warning and forward collision alert. Denali buyers also get blind spot and rear cross traffic alert, features previously unavailable. An eight-way power passenger seat is the sole province of the Denali owner, so if you love your spouse, well, you'd better spring for the bling.

Options are few once you get past the engine and all-wheel drive (both $1,750). Foremost among these would be the $795 charge to add navigation to the standard touchscreen audio with IntelliLink, GMC's smartphone telematics service. There's also a $350 trailer hitch and a $235 "cargo management package" that includes luggage crossbars. A rear seat entertainment system runs all of $1,295, though we'd be remiss if we didn't point out to those parents unconcerned about their children rotting their minds in the back seat that you could just buy each of them an iPad and a hefty iTunes Store gift card for the same money. Of course, we're not so sure the people who will be shopping Terrain Denalis are as concerned with value as they are with that shiny badge and unique grille.

Hugh Milne, Marketing Manager for GMC Crossovers, says that admittedly the Terrain Denali is in an odd competitive place. Maybe they'll see some customers also looking at a high-end Nissan Murano, he says, or the top-of-the-line Ford Edge. "Could we get some people cross shopping us against [ BMW] X3?" he asks rhetorically. "Sure, but we're not going to call it out."

Something you could also say about Denali.

GM contacted us after this article was originally published with a new 0-60 time, which has been updated in the text. 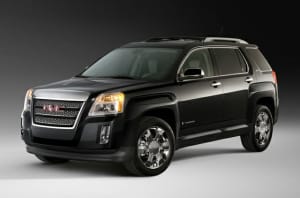