View All Specs
Aging Three-Row Still Light On Its Feet

All of the auto industry's big-time players are making large three-row crossovers these days, so the segment has become extremely competitive. With stalwarts like the Honda Pilot, Chevrolet Traverse and Ford Explorer at the top of the sales charts, how does a smaller automaker like Mazda compete? Two oft-repeated words: Zoom-Zoom.

The Mazda CX-9 checks the same boxes as its competition: a beefy V6 engine, seating for up to seven, available all-wheel drive and a bevy of technology optio­­ns. Those features are all part of the price of admission, but to make headway in this crowded field, that's not enough to cut it. On the market since 2007, we wanted to find out the 4,546-pound CX-9 still has the engineering mojo to dance to the head of the pack, so we grabbed the keys to a loaded Grand Touring AWD and headed for the floor.

Our Stormy Blue Mica tester is a Grand Touring model that boasts standard features like leather seating surfaces, along with hide-covered steering wheel and shift knob, eight-way power driver's seat and Bluetooth hands-free connectivity. Options include Mazda's Moonroof and Bose audio package ($2,255), navigation package ($1,665) and power liftgate ($400). With all options present and accounted for, our tester rang in at $39,990, including a $795 destination fee.

From the outside, there haven't been any changes to the CX-9 since its subtle refresh for 2010. Yet while the form of the big Mazda crossover hasn't been altered, it's still a modern-looking and attractive outer shell. The CX-9 features many of the same distinctive styling elements of the smaller CX-7, but the larger utility vehicle appears less edgy and a bit more mature. We're also fans of its nicely fitted 20-inch wheels, mated here to P245/50R20 all-season tires. The 20s are standard with the Grand Touring model, while lesser trim levels receive subtler 18-inch wheels.

The same familiarity can be found in the cabin of the CX-9. The interior hasn't gone through changes since 2010, yet it continues to be class competitive. The overall feel of the cabin is one of space and accommodation, with attractive-looking materials and pleasant contrasting tones. Every CX-9 comes standard with the aforementioned leather-wrapped steering wheel and shift knob, providing drivers with plush materials at their most frequented touch points. The seats are also a joy, being both comfortable to occupy and well-bolstered. The CX-9 also does a solid job of keeping out road noise, which is appreciated when attempting to hold a conversation with occupants in the second or third row.

The rest of the dash materials look refined and feature nice graining, but are still rock-hard. That's too bad, but the Traverse, Pilot and Highlander are also guilty of the same crime. The CX-9 does provide plenty of room for seven passengers, with a trick second row that slides fore and aft to provide extra space for third row occupants. Strangely, that last row of seating isn't covered in real leather like the rest, but we're okay with that since it likely won't be used very often. Even with the third row in use, the CX-9 offers 17.2 cubic feet of storage space. That's down from the 24 cubes in the Traverse, but within a foot of the 18 cubes in the Pilot. With the second and third rows stowed, the CX-9 boasts 100.7 cubic feet of space, or 13 cubes more than the Pilot.


Unfortunately, the CX-9 comes up a bit short on the technology front, as we struggled trying to figure out how to best use the hands-free Bluetooth system. We synced our smart phone and added our contacts, yet the system would still only accept phone numbers. We've experienced the same issue with other Mazda models. The navigation system also failed to give a good first impression, being slow and and offering an interface that was difficult to, well, navigate. Mazda says it's working on an all-new connectivity and navigation package, and it can't come soon enough.

While our overall experience of the CX-9's interior treneded slightly toward the positive, we were more interested in how well this biggest of Mazdas drives. We can say with confidence that Mazda chose a competent powertrain, which is a good start. The 3.7-liter V6 engine produces 273 horsepower at 6,250 revolutions per minute and a healthy 270 pound-feet of torque at 4,250 rpm. The industrial-strength six-cylinder is complimented by a six-speed automatic transmission with manual shift mode.

The powertrain affords the CX-9 plenty of power off the line, with an official 0-60 time of 7.4 seconds. That sounds about right to our bottoms, as we were impressed with how eager this three-row crossover is to leave the starting blocks. The CX-9 also boasts impressive passing power, as the automatic transmission doesn't hesitate to drop a gear or two when asked. Our tester also came with Mazda's Active Torque Split All-Wheel-Drive system that applies power to all four wheels. We were able to test this AWD system on some wet and sloppy roads, but they weren't sloppy enough to throw the torque-splitting system for a loop.

A willing powertrain is appreciated, but living up to Mazda's age-old tagline requires more than just horsepower – it requires nimble handling – no easy trick in something this large. For the CX-9, Mazda engineers have fitted MacPherson struts up front and a multilink independent suspension out back. When coupled with the AWD system, the suspension feels very composed, even when cornering hard at higher speeds, with limited body roll that isn't normally associated with high-riding 4,500-pound vehicles. Steering comes courtesy of a rack and pinion setup with variable power assist. Many crossovers feature higher steering ratios, but that isn't the case with the CX-9. The big Mazda features a 16.3:1 ratio, which helps the CX-9 drive smaller and feel more athletic. Braking's a snap thanks to 12.6-inch rotors at all four corners, though the pedal is sensitive and can take a bit of practice to avoid what feel like panic stops at the first few stop signs.

The CX-9 handles better than most any vehicle in its class, but when it comes to fuel economy, this Mazda is no different than other three-row crossovers. The Environmental Protection Agency estimates that the AWD-equipped CX-9 will deliver 22 miles per gallon on the highway and 16 mpg in city driving. This is where the weight and engaging driving dynamics came back to bite us, because we averaged just over 18 miles per gallon during our week with the CX-9. That's one mile per gallon less than the EPA says we should've averaged, and we likely would've gained it back were the CX-9 not as fun to drive for a three-row CUV.

Does the 2012 Mazda CX-9 deliver what the marketing campaigns have promised? This big CUV is no seven-seat MX-5 Miata, but Mazda has done well here balancing the size requirements of the typical crossover buyer with its own identity of offering more engaging rides than the next brand. We would like to see better fuel economy and a more state-of-the-art infotainment system, but even after many years on the market, the CX-9 still acquits itself well enough to shine as the clear enthusiast's choice in a segment not exactly known for driving engagement. 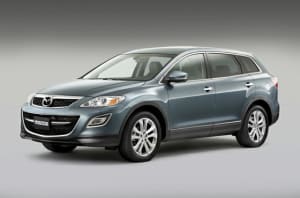