Danny King
Ford may make a plug-in hybrid-electric version of its Lincoln MKZ sedan for the 2013 model year, if there's customer demand for that variant, USA Today reported, citing comments Ford executive Scott Tobin made at the Detroit Auto Show recently. As it is, the 2013 MKZ will include gas-powered and hybrid vesions.

Ford will include a gas, hybrid and plug-in hybrid option for its 2013 Fusion mid-size sedan, which is why it makes some sense to do the same for the Fusions sister Lincoln vehicle. The company didn't disclose further powertrain details for the 2013 Lincoln MKZ.

Ford started selling Lincoln's first hybrid in 2010, and the company boosted sales of the model fivefold to 5,739 vehicles in 2011. The current MKZ hybrid, which pairs a 2.5-liter, four-cylinder gas engine with an electric motor, gets a combined 39 miles per gallon combined. That's almost twice the 21 mpg combined that the conventional six-cylinder MKZ achieves. 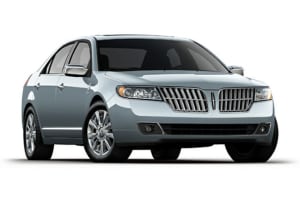