BMW 3 Series gets together for family portrait

Noah Joseph
Ask anyone in the know what the quintessential sports sedan is, and nine times out of ten they'll tell you it's the BMW 3 Series. It's the benchmark against which all others are measured, the target that every other luxury automaker has in its sights, and the very icon of what a luxury sports sedan should be. What's more, it has been all those things for three and a half decades, from the first model introduced in 1975 to the new sixth-generation model just rolled out last month.

With a hyphen or without, the 3 Series has come a long way, so to illustrate the fact, BMW has lined up all six generations for a family portrait or four, which you can check out in the high-resolution image gallery above, along with the detailed press release after the jump.
Show full PR text
The "face" of the BMW 3 Series through changing times: dynamic, innovative and always unmistakably BMW

Each new BMW 3 Series is a harmonious combination of BMW tradition and modernity, of classic and innovative elements that constantly interpret the desired family resemblance in a most exciting way.

Munich - January 13, 2012... During the course of more than three and a half decades, the face of the BMW 3 Series has constantly evolved. Designers have always managed to incorporate dynamics, innovation and aesthetics into a harmonious, modern and future-oriented overall concept, whilst at the same time preserving traditional values. As a result, each BMW 3 Series has retained its unmistakable brand identity and can be identified as a BMW at very first glance. However, the roots of the BMW Series reach back as far as the 1960s....

As a manufacturer of sporty, elegant sedans, BMW had at that time already developed a characteristic profile. With a notchback body design, front-mounted engines and rear-wheel drive, a basic principle was established back then (BMW 1500/2000) that still prevails to this very day. With the arrival of the BMW 1600 in 1966, the 2-door 02 Series, which produced such famous models as the 1600ti or the 2002tii, was launched on to the automotive market and eventually replaced by the BMW 3 Series.

The presentation of the first BMW 3 Series in July 1975 marked the beginning of one of the most remarkable success stories in BMW model history. Although the 2-door sedan bore a strong resemblance to the BMW 5 Series introduced in 1972, the market witnessed the launch of an entirely new vehicle with compact dimensions and a sporting character. The predominant design feature of the front end was also the brand's characteristic symbol, which was clearly identifiable even from a distance – the BMW kidney grille.

1975–1983. The design of the first BMW 3 Series is characterised by large windows, a distinctive wedge shape and, of course, BMW's brand-typical face, the front end being dominated by the kidney grille vividly protruding from the radiator cover to continue up slightly scoop-shaped along the bonnet to the windscreen. With short overhangs and a track width of 1,364 millimetres at the front, the new sports sedan boasts a rather low-slung appearance. Vertically mounted indicators flank the large round headlights on each side. On the occasion of its presentation, BMW gives the new model best chances of success: "Timeless and without superficial gallery play, the design of BMW 3 Series will also become a trendsetter for the next decade."

1982–1993. In 1982, the second generation of the BMW 3 Series presents itself as a worthy successor. As a result of a sensitively enhanced design and optimised aerodynamics, the new model has gained significantly in presence. The approx. 35 mm increase in track width also contributes towards the sedan's distinctively powerful look. Finally, on the whole, the body appears smoother and rounder, the sleek front end being the result of extensive wind tunnel tests, which is not least underscored by a drag coefficient of 0.37. The now low-slung front end boasting the flat BMW kidney grille elongates the entire front end of the vehicle, particularly as the double headlights now featured on all 3 Series models are located far on the outside. The smooth transition into all adjoining body surfaces not only determines the characteristic shape, but also ensures a good air flow around the vehicle. The low-set bonnet with its wide scoop rising gently from the front enhances aerodynamics, its surface not being interrupted by air intake openings.

1990–1997. In 1990, the time had apparently come to replace the soberly designed BMW 3 Series with an exceedingly elegant successor model. It is an entirely newly conceived sports sedan, the dimensions of which have increased all round, both surprising and pleasing the public to an equal extent. Besides the slim silhouette, the smooth front end of the new model is immediately evident, as the double headlights are now conjointly mounted behind a glass cover. In addition to dynamic lines and a distinctive wedge shape, a significantly lower bonnet and a raised rear end, technical refinements such as windows installed flush with the car body and targeted diffuser cooling air circulation inside the engine compartment also contribute towards the outstanding drag coefficient of 0.29 (316i). This BMW has therefore virtually nothing in common with its predecessor, but the family resemblance still remains recognisable. Thanks to typical styling elements such as the kidney grille and double headlights, it is still obviously a BMW, even though the dominating design element and symbol of the brand was now flatter and wider.

1998–2005. When the fourth generation of the BMW 3 Series is launched in May 1998, the compact sports sedan is some 40 mm wider and even the track width has increased by 60 mm compared with its predecessor. At that time, BMW designers describe the styling of the front end as follows: "On the whole and in essential details, the front end, the typical BMW face, has been reinterpreted, but it is still that unmistakable 3 Series face." The double kidney grille is integrated into the bonnet and, together with the dual round headlights located behind clear glass covers, again shapes the powerful character of the new BMW 3 Series' face. Compared with the front ends of the BMW 5 and 7 Series, the lower headlight surrounds form a distinctive separation: Here, the curvatures of the reflectors located in the exterior bodywork are finely outlined by a slight indication of curvatures, resulting in a clearly visible interruption of the horizontal line above the bumper.

2005–2011. With the launch of the fifth generation in the year 2005, BMW brings to the market a BMW 3 Series that is strong in character and exudes significantly more presence and power than its predecessor. Only a year after the market launch, the new styling strategy and the progressive design vocabulary gain the highest level of recognition, resulting in the BMW 3 Series being presented with the "World Car of the Year" award in New York. Members of the creative BMW design team are already convinced of the value of their work beforehand: "Within the series, the design has consistently developed in both small and larger steps. The new 3 Series represents a particularly high level of advancement in the vehicle's design history." Although the car makes only a proportionally moderate leap compared to the predecessor model, it does stand out from it significantly and noticeably. With the double kidney grille and dual headlights curved at the top, it exhibits the typical front end of a modern BMW – a focused facial expression.

From 2011. The sixth generation of the BMW 3 Series expresses essential qualities of the sedan such as agility, sportiness and dynamics in an entirely new way. Newly interpreted classic design features find a new lease on life and are reminiscent of the models of the 1960s. The large, almost seamlessly integrated radiator cowling with embedded headlights and kidney grille also characterised the distinctive face of the first BMW 3 Series in 1975. On the sports sedan of the year 2011, the modern dual headlights with LED eyebrows extend as far as the kidney grille frame, also forming a continuous optical unit spanning an arch to the historical predecessors in a modern way. The athletically arched bonnet additionally accentuates the front end, emphasising the car's presence and sporting appeal. Instead of a central air intake, the new BMW 3 Series has two larger air intakes located to the outside below the headlights. Additional vertical air vents are located on the outer edge of the air intakes, creating the so-called "air curtain". By means of enhanced aerodynamic airflow in the vicinity of the front wheels it facilitates a reduction in fuel consumption at high speeds and contributes towards an outstanding drag coefficient of 0.26.

Although more than 35 years lie between the first generation of 1975 and the current BMW 3 Series, both front ends attest to an unmistakable brand identity and, in spite of the great difference in age, are both immediately recognisable as members of the same family. Then as now, the design bestows the BMW sedan with its styling and personality, expressing contemporary and trendsetting dynamics, innovation and aesthetics. Hence, each generation of the compact sports sedan stands for BMW tradition and modernity alike. And each model combines classic and innovative elements that interpret this theme in their very own way. 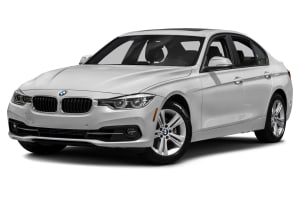