Ever since the launch of the, uh, polarizing Honda Crosstour, the rumormill has been buzzing with word that Honda might someday add a four-cylinder engine to the lineup. Makes sense, since the Accord on which it's based offers a four-pot, and the CUV's key competitor, the Toyota Venza, also offers a more efficient four-cylinder powertrain.

The 2012 Crosstour – remember, it no longer wears the Accord name – will now be offered with a 2.4-liter inline-four in its EX and EX-L trims. Rated at 192 horsepower and 162 pound-feet of torque, the front-wheel-drive, four-cylinder Crosstour is good for up to 29 miles per gallon on the highway (21 mpg in the city), and is mated exclusively to a five-speed automatic transmission. Unlike the top-trim EX-L V6 model, none of the four-cylinder Crosstours will be available with all-wheel drive. What's more, four-cylinder models will ride on 17-inch alloy wheels, whereas six-cylinder Crosstours can be had with 18-inch rollers.

Two new four-cylinder, two-wheel-drive Honda Crosstour® models are set to go on sale next month, broadening the vehicle's appeal through a lower price point and EPA-estimated fuel economy that increases 3 mpg1 in the city and 2 mpg1 on the highway.

Premium interior styling, appointments and details extend from the passenger compartment all the way through the cargo area. An under-floor storage area in the rear of the vehicle adds functionality, while reversible cargo floor panels accommodate dirty objects.

The new four-cylinder Crosstour models come with a 2.4-liter, 16-valve DOHC i-VTEC® engine for power and efficiency. The engine produces 192 horsepower at 7,000 RPM and 162 lb-ft. of torque at 4,400 RPM, while achieving an EPA-estimated city/highway/combined fuel economy of 21/29/24 mpg1. To maximize efficiency, a technologically advanced 5-speed automatic transmission with Grade Logic Control is standard equipment.

The Crosstour is assembled in Ohio at the Honda of America Mfg., Inc., East Liberty Auto Plant using domestic and globally sourced parts. 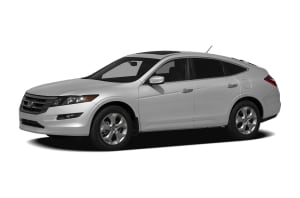