Despite recent sad decisions by Ingolstadt and the company's regional bosses in Herndon, Virginia not to include either the stunning new A6 Avant or the handsomely reworked A4 Avant in its U.S. lineup, Audi has crunched the numbers on another niche's business case and decided to throw us one hell of a bone. Arriving on our shores by July 2012 for the first time is this spanking refreshed A4 Allroad Quattro. As consolation presents go, it's a humdinger.

We've just had a shot at driving this latest A4 Allroad – a model originally created in early 2009 – in various European trims along the Portuguese shore north of Lisbon and over the mountain roads just inland of the same. We can say right off that the discreet slice of American premium car buyers who understand the Allroad legend have much to look forward to. They make up a sympathetic (though generally separate) fan club from those who buy the Subaru Outback. Allroads are for well-to-do drivers who share a passion for this rough-roading, do-it-all niche, and they won't be palmed off with traditional SUVs or their more upright crossover substitutes.

To inaugurate the second coming of the Allroad franchise to the States, Audi is holding the A4 Allroad's world premiere at January's Detroit Auto Show. Through thick and thin, Audi has always treated Motown's motor expo very seriously. Showing such a fondly admired model like the Allroad here first means a lot. There has been a lingering sense of unwilling withdrawal ever since Audi creased importing the A6-based Allroad back in 2005, and confirmation of this new model figures to be a homecoming of sorts.

In Portugal, Audi had the A4 Allroad available for us to test in two configurations: one with the 208-horsepower 2.0-liter TFSI gasoline engine mated to the Euro standard six-speed manual transmission and another with the 241-hp (and 369 pound-feet of torque) 3.0-liter TDI diesel using the seven-speed S tronic dual-clutch gearbox. The only trim confirmed for the U.S. and Canada is the 2.0 TFSI with the ever-present eight-speed single-clutch Tiptronic, which is too bad, since the S tronic is just a better fit for this sporting softroader.

Why did Audi go this route? The basic message we got whenever we asked is that executives believe buyers in these bread-and-butter segments prefer a more casual relationship with their transmissions. Well, that and the fuel efficiencies implied in a transmission with two overdrive gears should also help keep the California Air Resource Board greenies at bay. We can only imagine what a joy it would be to have the torquey 3.0 TDI together with Audi's sweet six-speed manual. It'd be an ideal sled for devouring the American countryside, particularly in areas that get four proper seasons.

The tried-and-true 208-hp turbocharged and direct-injected 2.0-liter TFSI seen here has so far proven to be both indestructible and lively in its years of service in the Audi empire. The A4 Allroad Quattro with its automatic gearbox puts this reputation to its severest test, weighing some 3,803 pounds at the curb with a driver and one small travel bag aboard. The 258 pound-feet of torque on hand between 1,500 and 4,200 rpm certainly helps matters. Normally, in a lighter TT or A3/ A4 sedan on uphill climbs or coming out of certain curves, we might leave the manual or S tronic (or the U.S.' Tiptronic) in third or fourth gear with minimal lugging, but given the few hundred additional pounds aboard the Allroad, it was occasionally necessary to downshift into second or third. However, keeping in mind why we people buy an Allroad, this compensating to grab revs and oomph doesn't strike us as a critical issue. We actually enjoyed it, in fact. Top speed for Euro Allroads is limited to 143 miles per hour, but Yankee top ends will be snipped at 130 mph. Acceleration to 60 mph with the Tiptronic is estimated at a more than decent 6.6 seconds.

Whether you want the optional steering wheel with paddles or not is a personal choice, though in this case, your author prefers to shift manually fore and aft with the console lever. (It is at this point how we feel compelled to repeat how much we long for the big six and a manual gearbox).

One of the happier outcomes of needing to rely on the 2.0-liter TFSI is that the whole engine range for the A4 family is now more frugal. While power and torque figures remain unchanged on this particular engine, thermal management for heating and cooling of the engine and gearbox fluids has been optimized to act more quickly right from the first cold start. In addition, all A4 models now get an electromechanical steering system with 2.9 smooth turns from lock-to-lock, a setup that lowers overall fuel consumption in part by decoupling when not in use, such as during long interstate travel. The third major advancement is a significant reduction in mechanical friction between all moving parts, an additional benefit of which is smoother throttle response and during transitions up or down through the gears. EPA highway mileage should increase from 29 mpg to a solid 32 mpg, while city mileage ought to be announced as 23 mpg versus the current Tiptronic model's 21 mpg.

Along with the Tip automatic, owners of the A4 Allroad Quattro will benefit from opting for the newly available Audi Drive Select system with its five modes: Efficiency, Comfort, Auto, Dynamic and Individual. Furthermore, the individual settings for the A4 Allroad has been simplified to better calibrate engine response and steering feel between Comfort, Auto and Dynamic modes. With the Allroad's slight weight penalty in play, the system's various modes provide subtle differences between the various settings, but they are appreciable.

The Allroad rides some 1.5 inches higher than the A4 sedan and Avant bodystyles for a total ground clearance of 7.9 inches, and suspension travel becomes somewhat longer and more pliant. Tires are Dunlop SP Sport Maxx GT (245/45 SR18 96Y all around) and they were a good enough match for the Allroad all day, transmitting the default 40:60 torque split of the onboard Quattro setup to Portugal's warm pavement with tremendous composure.

In addition to the raised height and plastic composite anti-scuff skirting, the stainless steel underbody skid plates are key to the Allroad's aesthetic and its enhanced off-road ability. While the front fog lights on ground-bound A4 sedans and wagons are now laid in flat within the new front air intakes, the Allroad gets more traditional circular units. The new-look A4 headlights are here, too, while the more rounded engine hood and half-inch greater overall width add substance to the Allroad's look.

Functional roof rails to support a 200-pound load are included with the Allroad, and we found the cargo area to be just as easily flexible as you might hope. Cubic feet ranges from a minimum of 17.3 to a suggested maximum of 50.5 with rear seatbacks flopped flat forward and the space filled to the roof. Stick to an eight percent uphill gradient max and your towing weight allowed is 4,190 pounds. If you anticipate up to a 12 percent tug angle, load only up to 3,750 pounds back there, okay?

We expect the A4 Allroad Quattro in Premium, Premium Plus or Prestige trims to add $2,000 over the outgoing – perhaps never to return to us – A4 Avant, starting at roughly $38,500. If our MSRP crystal ball is correct, that puts it in the thick of the hunt with more traditional entry-level crossovers, including Audi's own Q5, which starts at around $35k.

So, we will finally have an Allroad model back on U.S. soil, which is good... nay, great news. It would be excellent to get the mondo 3.0-liter TDI V6 with manual shifter, but we're overjoyed already with this unexpected holiday gift. Besides, if Well-Heeled America steps up (literally) to buy the Allroad, perhaps Audi will see fit to expand the range. 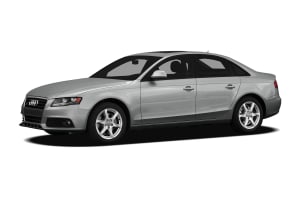