View All Specs
Learning To Love The Bug

Volkswagen began building buzz for the 2012 Beetle long before we caught a glimpse of the first spy shots. The company's executives were throwing phrases like "fun to drive," "masculine" and " Porsche-derived styling" toward the would-be Beetle successor as far back as the 2010 Paris Motor Show. In this business, you either learn to read through hyperbole or choke to death on it, so it goes without saying that our hackles were quivering with skepticism at the time. Volkswagen could hardly blame us.

We had been living with the Type 1C New Beetle for nearly 13 years at that point, and the vehicle had grown into a caricature of itself. Back in 1997, the plucky bubble design was fresh and innovative, but as other automakers began to cash in on the retro design movement, the half-circle Beetle grew very tired very quickly. As a driver, it was merely adequate when it first bowed, and time hadn't been particularly kind to the chassis. Volkswagen wasn't just asking us to stretch our imaginations to cope with the notion of a sporty-looking, engaging Beetle. They wanted us to snap them in two.

Then the 2012 Beetle debuted, and sure enough, the two-door rolled onto the scene with a more vertical windshield and a longer nose. Those two attributes alone are enough to put it more in line with original Beetle design, and, as a result, give the 2012 Beetle a portly Porsche 911 appearance. Car gods help us, we like it, but what about that whole "fun-to-drive" thing?
To be fair, there's much more to the 2012 Beetle than a revised nose. The vehicle is significantly longer and wider than its predecessor while riding closer to the ground as well. That's thanks in part to the fact that the hatch now makes use of the same platform as its Golf and Jetta stable mates. All told, the Beetle is six inches longer and 3.3-inches wider than the 2010 model, and those dimensions do much to give the still-retroish hatch a more planted appearance. That doesn't mean that the designers at Volkswagen have excised the pluck from the three-door, though.

From the front, the Beetle still greets onlookers with a wide-eyed grin thanks to large, round headlights and a smiling grille set low in the front fascia. The Beetle also wears a plunging, hooked hood that harkens to both the previous generation and the original Beetle we all know and love. Move to the vehicle's side, and it's easier to spot the 2012 model's new profile. Our Turbo tester came wearing an attractive rear spoiler that lent the vehicle a fair helping of athleticism, as did the Bug's 18-inch dual-tone alloy wheels. A set of red painted calipers also peeked through the spokes to add a bit of racy color down low.


The new Beetle looks like it should be on the road, not in a toddler's play pen.

Volkswagen has integrated an interesting piece of three-dimensional trim along the bottom of both doors that adds depth and detail to an otherwise unbroken slab of sheet metal. The trim matches the depth of the vehicle's rocker panels and trails into the rear fenders nicely. And speaking of fenders, the 2012 Beetle wears sheetmetal that's as expressive as ever, though the new design backs away from the semi-circles of models past. In the front, the fenders elongate into the front fascia for a more mature look, and the rears work in attractive tail lamps. The result is a vehicle that looks like it should be on the road, not in a toddler's play pen.

Out back, the 2012 Beetle has backed away from soap-bar aesthetics in favor of a set of easily-identifiable hips and dual exhaust outlets. To say the look is an improvement is a sure-fire way to garner yourself a nomination in the Understatement of the Year Awards. The design draws gaping stares from just about all walks of life, and we found ourselves having lengthy parking-lot discussions with everyone from housewives to construction workers about the Beetle's finer points of design. This isn't a hatch that breeds anonymity.

Slip indoors and the 2012 Beetle still offers a surprising amount of headroom. The optional sunroof, with its ridiculously large opening, only reinforces the notion that a juvenile giraffe could comfortably take to the wheel, and the extra inches in wheelbase means that life-size adults can step into the rear seat without any accordion antics. There's simply a massive amount of space in this thing, though Mini Cooper buyers will enjoy substantially more front leg room. The hardtop bests the 31.4-inches available in the Volkswagen by a hefty 10.3 inches. That giraffe better have short legs.

From behind the wheel, it's clear that the 2012 Volkswagen Beetle Turbo desperately wants to seem sporty. Tricks like a flat-bottomed steering wheel, high-bolstered seats and a massive, easy-to-read speedometer are all quick to whisper apex temptations in your ear. But this is still an adorable commuter first and foremost, and real performance enthusiasts will itch for the execution in the Jetta GLI or Golf GTI. While those seats boast high bolsters, the foam is situated more for big-boned American book club members than your average autocrosser, and that big speedometer leaves the more important tachometer buried in the corner of the instrument cluster. Our DSG-equipped tester packed clicky-buttons on the back of the steering wheel, presumably for hot-shoe gear changes. Edge is clearly not a part of the Beetle Turbo recipe.

And the drivetrain bears that out. The base 2012 Beetle is saddled with the same loathsome 2.5-liter five-cylinder engine found elsewhere in the brand. We have to imagine the 170-horsepower engine has more than a little trouble hustling the 3,042-pound hatch with anything approaching a quickness. Our tester bore the slightly more lively turbocharged 2.0-liter gasoline engine with 200 horsepower at 5,100 rpm and 207 pound-feet of torque from just 1,700 rpm. The powerplant can be mated to either a six-speed manual transmission or an optional six-speed DSG. In the U.S., the dual-clutch has been specifically programmed to maximize fuel economy, which translates into plenty of short-shifts in daily driving.

The result is a Bug that feels considerably slower than it should, especially given that the same drivetrain has been painting smiles on our faces in various Volkswagen models for years. Kick the shifter over into the optional sport mode, however, and the story changes. The shift logic keeps the engine happily within its powerband, delivering snappier throttle response and significantly less hesitation. Unfortunately, sport mode's tendency to hold gears well into the rev range means that it isn't fit for daily driving duty, leaving buyers with an all or nothing proposition.

Likewise, the Beetle's suspension tuning has been penned for comfort, yielding plenty of body roll under a hard shuffling. And despite offering disc brakes on all four corners, the 2012 Beetle doesn't offer a performance braking experience. While fade is kept to a minimum during short hard-driving stints, the pedal is simply too soft with too much travel to inspire any confidence.

So, it's clear the 2012 Volkswagen Beetle Turbo isn't a fit competitor for the Mini Cooper S. But that doesn't mean the German automaker will have any trouble finding buyers for its newest retro hatch. While it may not be the kind of machine we'd feel comfortable taking to a track day right out of the box, this Beetle is a vast improvement over the outgoing generation in every way. The drive is more comfortable and stable thanks to the longer wheel base and additional width, and the rear passengers can sit comfortably without introducing their skulls to the headliner. In the end, the Beetle Turbo is a stylish way to get around town that's still as playful as the Type 1C.

There are other drawbacks, however. Our tester, which was slightly different than the car we wound up photographing, came packing the excellent Fender sound system, and the aforementioned DSG six-speed and a massive sunroof, which bumped the final price tag to $27,495 plus a $770 destination fee. That's knocking on the big $30k for a vehicle that feels very much like a compact in terms of usable space and interior refinement. Then there's the fuel economy issue. The Environmental Protection Agency estimates that buyers should see 22 mpg city and 30 mpg highway out of the Beetle, and we were met with around 23 mpg combined during our time with the vehicle. Given that the Beetle isn't overly quick or powerful, that figure is embarrassing for a hatch this size, especially given that Volkswagen recommends premium fuel for the most performance possible.

The 2012 Volkswagen Beetle is certainly a step in the right direction, but the MSRP, low power figures and lackluster fuel economy might have us sniffing elsewhere if we were in the market for an adorable retro hatchback. Volkswagen has already teased us with the Beetle R concept, which may hint to the fact that a quicker version of the Bug will show up in the near future. Until then, we'll leave this one to nostalgic baby boomers. 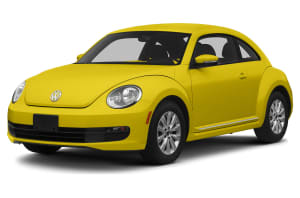