There's no question that Nissan has done some radically impressive things with its GT-R, proving beyond the shred of a doubt that Japan's mainstream automakers can stick it to Europe's elite. But you don't get to where Nissan has gotten with the GT-R by sitting back and letting it grow old. Yokohama's finest spend day and night keeping Godzilla razor-sharp and ready for action. And to that end, they've launched a series of improvements for the latest model.

To say that the updated GT-R represents any sort of major step forward would be a gross exaggeration, but it does pack some new features. Among them are a retuned version of the 3.8-liter twin-turbo V6 that now delivers more power – 542 horsepower instead of 523 – while returning higher efficiency and lower emissions. A recalibrated shift action, new differential lubricants, an even tauter frame, available carbon-ceramic brakes and an available "track pack" for hot-lap enthusiasts are also part of the improvements. Right-hand-drive models get an assymetrical suspension setup to compensate for the weight of the driver and steering column, there's a new Bose sound system and a rearview camera now comes as standard.

The improvements are said to shave an astonishing eight to ten seconds off the GT-R's already impressive Nürburgring lap time and drop the 0-60 time to as little as 2.7 seconds. Now that's what we call progress. Click past the jump for the official video and press release.


Currently, the new model is being rolled out in Japan and Europe – set to debut later this month at the Tokyo Motor Show – but it's probably only a matter of time until we get the improvements Stateside as well, where we expect it will debut soon as the 2013 model. So stay tuned. In the meantime, you can check out the huge batch of fresh high-resolution images and follow the jump for the video clip and Euro-spec press release.

Significant improvements to the engine, chassis and transmission, plus a new lightweight "For TRACK PACK" version (currently available in some market such as Japan, UK), which accentuates the pure performance potential of the GT-R are the key changes to Nissan's flagship model for the 2012 model year.

When it was launched, the iconic GT-R created a new type of super car. Performance and handling were exceptional, of course, but more importantly the car's potential was accessible to all drivers under all conditions. It was greeted with universal praise but Nissan's policy of constant development means the GT-R continues to evolve.

The latest version, which is due on sale in Europe in January 2012, is the most efficient yet. It offers even greater performance but this is allied to improved economy and lower emissions to provide further excitement to drivers and passengers.

As well as more power, the 2012 MY GT-R has a newly developed asymmetric suspension which compensates for greater weight on the driver's side in RHD models, enhanced transmission 'feel' and a stronger body for extra rigidity and ever better handling.

There's also the arrival of a new "For TRACK PACK" version (currently available in some markets such as Japan, UK) which inherits the DNA of the Spec_V model and turns the GT-R into a light-weight two seater for the ultimate in trackday performance.

Engine response and torque at mid- and low-speeds, and power at high revolutions, has been significantly improved, mainly due to:
- Improved intake efficiency
- Better air flow resistance, which has been reduced by the addition of an intake manifold fitted to the head of each unit and the use of resin in the enlarged air intake duct for the intercooler.
- Improved exhaust emissions efficiency and enhanced control.
- Reduced air flow resistance thanks to a more compact under floor catalyzer which improves emissions efficiency and reduces weight.
- Improved exhaust valve cooling performance by the adoption of a newly-designed metallic sodium-filled valve. At the same time, valve control timing, the air mixture ratio and ignition timing have been improved.

Transmission
Shift feels and quietness has been refined thanks to a strengthened design of the shift fork arm and a firmer fixing bearing for the flywheel housing. A special differential oil R35 COMPETITION Type 2189E (75W140), which was developed for competition is now used in every version of GT-R.

Body
As well as greater power and torque, the reinforcing of certain areas around the rear part of the engine compartment and dash panel deliver more responsive handling while a greater sense of the vehicle's grip on the road is transmitted to the driver.

At the same time, more precise production methods, accompanied by advancements made in the vehicle body, have improved the inter-vehicle detection capability. This was achieved by changes in the positioning of the sensor and more rigid, highly-damped vehicle body, and by adding a more accurate acceleration sensor in areas with higher sensitivity in the vibration testing of each vehicle body.

Suspension and brakes
Accounting for the added weight of the driver in a right-hand drive vehicle coupled to the fact that the propeller shaft for front wheels is located on the right side of the vehicle; the GT-R's suspension in RHD versions has been set asymmetrically. For the front suspension, there's a harder spring rate on the left side while at the rear the suspension arm has been installed upwards on the left side and downwards on the right. This means an imbalanced wheel load when the car is stationary, but which is equalized during driving, providing improved responsiveness, smoothness and steering feel, as well as enhanced cornering stability and riding comfort (for RHD only).

NCCB (Nissan Carbon Ceramic Brakes) are available as a factory-installed option for the GT-R Premium Edition and EGOIST grade. These brakes accentuate the car's agile road hold and supple ride feel thanks to a dramatically-reduced spring weight and refined, sharp braking performance unique to carbon ceramics. (In addition, service parts prices for the rotors and pads have been reduced.)

2. Interior
The quality feel of the instruments placed in front of the driver have been enhanced by the addition of blue lighting inside the tachometer ring to match the shift position indicator light giving a more sophisticated atmosphere in the cockpit.

Rear View Camera device will be standard on all models.

The Bose® sound system woofers, have been changed to Bose® Precision Sound System woofers that were developed for the EGOIST grade to further enhance sound quality.

Jointly developed with NordRing Company in Japan, it features revised suspension settings, extra brake cooling (front and rear), and aluminum-alloy wheels from Spec-V made by Rays (with black quartz chrome color coating). The front spoiler with carbon air duct has been exclusively made for this edition and is installed as a set.

To reduce the car's weight, this edition is a two-seat configuration with quilted fabric mats in place of the rear seats. The front seats are covered with leather and high-grip fabric, newly developed for the "For TRACK PACK" version and which firmly holds the driver in place during even the most spirited of trackday action (RHD only).

With the latest 2012MY version, the legend that is the Nissan GT-R continues to evolve. 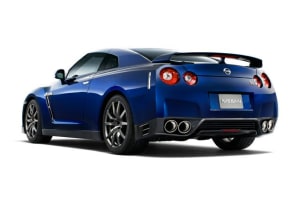