Every six months or so, we drive a car that exceeds our expectations. Such is the case with the all-new 2012 Buick Verano, the American automaker's fresh new entrant into the $25,000 compact luxury segment.

Buick explains that there is a window of opportunity for a small luxury sedan priced below the Audi A3, Lexus IS 250 and Acura TSX sedan, but above the Honda Civic, Ford Focus and Chevrolet Cruze. After identifying the void, Buick's objective was to develop a vehicle that was quieter, more luxurious and better equipped than anything close to its $23,470 cost of entry. Even loaded with every option, the Verano won't exceed $29,000, a figure which cleanly undercuts all of the aforementioned luxury imports by several thousand dollars.

Buick flew us up to Portland, Oregon, last week for an opportunity to put more than 250 miles on its new Verano in the spectacularly scenic Northwest. We arrived intrigued, and left very impressed.


Buick's third new model in as many years debuted at this year's Detroit Auto Show. Its first compact since the Buick Skylark was dropped in 1999, the Verano (Spanish for "summer") is built on General Motors' Delta II platform, an architecture shared with the Chevrolet Cruze. But don't be mistaken that this is just another one of GM's ill-advised exercises in badge engineering – it isn't. The Verano shares some suspension underpinnings with its economy-oriented cousin, but the powertrain and cabin appointments scream upmarket Regal - or even baby LaCrosse.

Let's peel back the sheetmetal and take a closer look inside.

A turbocharged 2.0-liter four-cylinder model will arrive sometime in 2012.

Set behind the signature waterfall grille and beneath the silly do-nothing portholes on the hood is GM's Ecotech 2.4-liter four-cylinder powerplant that's shared with the Regal. A larger engine than the Cruze's 1.4-liter turbo and 1.8-liter normally aspirated four-cylinder choices, this all-aluminum engine features direct injection and continuous variable valve timing on the intake and exhaust to deliver 180 horsepower at 6,700 rpm and 171 pound-feet of torque at 4,900 rpm on regular fuel. The naturally aspirated, E85-capable engine is mated to a conventional six-speed automatic transmission (Hydra-Matic 6T45) sending power to the front wheels. With a curb weight of 3,300 pounds, Buick says the Verano will hit 60 mph from a standstill in 8.6 seconds – respectable for a vehicle promising an EPA rating of 21 mpg city and 31 mpg on the highway. If you are seeking a bit more punch, you'll want to wait for the turbocharged 2.0-liter four-cylinder model that Buick says will arrive sometime in 2012.

The front suspension is independent with MacPherson struts, while the rear is configured with a torsion beam augmented by a Watts Z-link design to keep things in check. There are disc brakes at all four corners, with single-piston steel calipers clamping down on 11.8-inch ventilated rotors up front and 11.5-inch solid discs in the rear. Standard wheels are 18-inch cast aluminum alloy, wearing 235/45R18 all-season tires at all four corners (there is also a compact temporary spare under the carpet in the trunk).

Buick has gone the extra mile, or two, to isolate the mechanical underpinnings and their associated operating noises from those within the cabin. Before sound makes its way to the ears of people riding in the Verano's cabin, it must figure out a way to permeate two damping mats on the firewall, nylon and foam baffles strategically located within hollow parts of the chassis, five layers of acoustic headliner, sound deadener on the underbody sheetmetal and trunk, triple-seal doors, 5.4-mm acoustic laminated windshield and 4.85-mm acoustic-laminated side glass. Even the brake and fuel lines have been isolated to prevent vibrations from entering the cabin. We've talked before about how hushed this car's more plebeian Bowtie cousin is, and the Verano's Quiet Tuning checklist muffles things even further.

Verano models equipped with the Convenience Group are fitted with rear park assist, heated side mirrors and an auto-dimming rearview mirror. The Leather Group adds natural hides (the same high-grade skins are used in the LaCrosse), a power-operated driver's seat, push-button keyless start and an upgraded Bose audio system. Navigation and a heated steering wheel are about the only options. Even fully loaded, the new compact luxury car will not surpass $29,000.

We put more than 250 miles on the new Verano last week in Oregon. The scenery was spectacular, the weather was semi-cooperative and the other traffic on the forest roads was simply frightening; nothing is more stimulating than an 80,000-pound logging truck coming the opposite direction on a wet two-lane road at 65 mph (the Verano has ten standard airbags and GM says it should be an IIHS Top Safety Pick, but we didn't want to run any tests for them).

With such luxurious accommodations up front, it's easy to forget that the Verano is a compact car.

Strapped into the front left seat, the driver is presented with an instrument cluster that would be immediately familiar to a Regal owner. Two large analog dials (an 8,000 rpm tachometer and a seriously optimistic 170 mph speedometer) are visible directly through the steering wheel, with smaller coolant temperature and fuel level dials situated above. In the middle is a monochrome multifunction display with trip computer, odometer, and other engine information. The center stack houses the IntelliLink touchscreen at the top, audio/navigation controls in the middle and climate controls at the bottom. A traditional automatic transmission shift lever (PRND +/-) takes front billing on the center console, followed by the electronic parking brake and twin cupholders rimmed in chrome. With the exception of the oddly located start/stop button just below the touchscreen (leaving a strange growth on the side of the steering column on vehicles without it), everything seems logically placed.

We found both front chairs to be very comfortable. The driver's seat on our leather-equipped model was partially power-operated (just the lower cushion), while the front passenger's seat was purely manual in operation, but still adjustable for height (oddly, we genuinely liked it better than the driver's seat for overall comfort). Rear seating was tight for adults, requiring front occupants to slide forward a couple inches to fit everyone agreeably. Yet with such luxurious accommodations up front, it's easy to forget that the Verano is a compact car.

The view outward was good, but the steeply raked windshield means the jutting A-pillar takes some time to get used to as it sits very far forward. Buick has thoughtfully put fixed quarter light windows at the base of the A- and C-pillars to improve cabin light and peripheral vision, while others in this class just plug them with black plastic panels. They work well.

The all-season tires, low displacement engine and soft suspension all seem to throw in the towel together at about seven-tenths.

On the road, Buick's obsession with noise reduction became immediately evident. From the muted hum of the four-cylinder spinning under the steel hood to the barely discernible slapping of all-season rubber on the pavement, the Verano is one quiet little vault. Low interior noise meant conversation was easy and driving became much less tiresome. Even after 250-plus miles with only a few short stops, we weren't the least bit mentally drained and the supportive seats meant our vertebrae emerged unscathed.

The power from the 2.4-liter was adequate, but much of its steam was lost above legal speeds when attempting two-lane passing maneuvers. We did try a few slower twisty sections with the transmission held in manual mode, running it up to the 7,000 rpm fuel cutoff just to see what happened (it bounces madly on the limiter while dire warnings flash on the center multifunction screen). When pushed to the limit, the all-season tires, low-displacement engine and soft suspension all seem to throw in the towel together at about seven-tenths. It performed better than we expected, but it still won't run with the more expensive Acura TSX, Lexus IS250 or Audi A3 with any of us behind the wheel. Of course, those cars all cost more, and Buick offers the Regal GS for those who prefer performance over pampering.

Admittedly, we initially questioned the need for a compact luxury sedan from Buick (after all, don't centenarians generally prefer larger vehicles?). But after spending some time with the Verano, all joking aside, Buick's strategy appears quite solid.

The new Verano is a remarkable entry-level luxury effort. Its long list of standard features and upscale cabin make other compacts in this bracket look cheap and overvalued, and its tranquil cabin will appeal to anyone who has driven noisy cars costing many thousands more. Its sweeping electronics suite, including standard OnStar technology with crash response, will do its best to tempt younger buyers while Buick's comprehensive warranty with free courtesy transportation serves to sweeten the deal. Driving enthusiasts need not apply, but from just about every other angle, the 2012 Buick Verano makes a pretty compelling argument for itself. 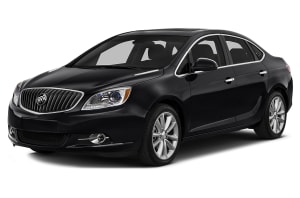