View All Specs
Entering Its Silver Years With A Supercharged Six

Life for us mammals is comparatively finite. Lacking the luxury of a mid-cycle refresh, the average human in the United States can expect to live about 80 years before their clock stops ticking. That isn't too terrible in the grand scheme of things. After all, the typical mountain lion is lucky to get 20 years as a feared predator while most guinea pigs go quietly after just eight years in the household cage. Mammals don't have many options when it comes to getting old.

Not so with the automobile. With few exceptions, the average lifecycle of a passenger vehicle is a short five to seven years. However, instead of sitting idle as its beloved machinery ages into senility, manufacturers treat passenger vehicles to mid-cycle makeovers with new fascias, upgraded electronics and more efficient engines. The intent is to breathe new life into models and make them more appealing lest they get lost amid a sea of younger designs.

The Audi Q7 is in the middle of its fifth model year – pushing 60 in human years. And fresh off a facelift just last year, the full-size SUV receives a complete heart transplant for 2011. The new supercharged V6 is not only engineered to make the seven-passenger vehicle more competitive in a difficult market, but to carry Audi's first crossoffer towards its eventual retirement. Or behind the shed.

The Q7 was a fresh new face when it debuted at the 2005 Frankfurt Motor Show, despite sharing unibody platforms with the Porsche Cayenne and Volkswagen Touareg. However, unlike its five-passenger relatives, the Q7 rode on a stretched wheelbase allowing room for a third-row seat. When it rolled into showrooms for the 2007 model year, Audi's new Q7 was offered with either a standard 3.6-liter V6 or an optional 4.2-liter V8. A 3.0-liter turbodiesel variant, badged the Q7 TDI, arrived Stateside in 2009.

Last year, both Porsche and Volkswagen introduced their second-generation Cayenne and Touareg models on new, freshly-engineered, lightweight platforms. Logic dictated that Audi would also spawn a new Q7 model. Instead, the Q5 and all-new Q3 received the bulk of attention and the second-generation Q7 was pushed out another few years. Stonewalled but not completely forgotten, Audi treated its big SUV to a facelift for the 2010 model year with new styling incorporating front and rear LED illumination, fresh wheel designs and upscale cabin enhancements.

Despite last year's overhaul, the 2011 Q7 once again went under the blade. The standard 3.6-liter V6 and optional 4.2-liter V8 powerplants were dropped in favor of the more flexible and fuel efficient supercharged 3.0-liter V6. The six-speed automatic transmission was replaced by an eight-speed 'box and the cabin got a once-over for good measure.

The "S line" provides a sportier look to match the improved performance of the engine, says Audi. Aside from the obvious 20-inch alloy wheels wrapped in fat 275/45R20 tires, the upgrades include unique S line front and rear bumpers, side skirts, interior doorsills and the obligatory badging. The suspension and brakes are unchanged.

The significant news for 2011 is found under the hood. That's where the naturally-aspirated six- and eight-cylinder powerplants were tossed aside in favor of the automaker's supercharged 3.0-liter TFSI V6. The blown six-cylinder, which is also fitted to the S4 and new A7, delivers 272 horsepower and 295 pound-feet of torque in standard trim. However, to replace the V8, the engine has been tuned to develop 333 horsepower and 325 pound-feet of torque in the S line guise. Regardless of tune, a new eight-speed Tiptronic automatic transmission is bolted to the back of each engine. With less displacement and more gear ratios, fuel economy improves to 16 mpg city and 22 mpg highway (the 4.2's numbers were 13 mpg city/18 mpg highway). Acceleration to 60 mph comes up in just 6.9 seconds, says Audi.

Chocolate usually isn't our first color-of-choice for an automotive interior, but Audi pulls it off surprisingly well. The "Espresso Brown" leather and trim in our tester was color-coordinated with black textured plastic, dark brown walnut wood inlays and brushed aluminum trim below the window sills. Overhead, a solid gray headliner surrounded a three-panel panorama glass sunroof (standard above mid-grade Q7 models), all combined to give the cabin an inviting, warm overtone.

We are very familiar with Audi's new A6, A7 and A8 sedans. Unfortunately, their superlative cockpits make the Q7's switchgear an age-defining wrinkle. While high quality in operation and feel, the overall appearance is old school in both layout and execution. For example, the ignition key is the overly familiar Volkswagen Group metal switchblade. However, the standard (and redundant) Advanced Key means the electronic access and authorization system allows the physical key fob to stay in the driver's pocket or purse at all times – hit the "Start Engine" button to start the engine and then hit the entirely separate "Stop Engine" switch to kill the ignition. Audi's MMI infotainment controller is also aged, with the earlier and more confusing human interface (the Q7's "Return" button is the A7's "Back" button) and the steering wheel lacks the newer and more modern functionality of its sedan siblings.

Most won't notice, and few will care, as both driver and front passenger get first class treatment thanks to the standard 12-way power-operated and heated front seats with lumbar support. The cushions are a bit flat and they don't offer much in the way of lateral support, but they are well padded and very comfortable for the long haul. There is also generous seat travel for those looking to stretch. Second-row occupants enjoy bountiful legroom, four-zone climate control and heated seats in our S line tester. Tinted privacy glass and manual sunshades reduce glare (and serve a dual role of keeping prying eyes from peeking into the cabin in parking lots). The third row of seats, however, is very tight. It offers more room than the third row in the BMW X5, but that isn't a bragging point. Small kids may like them for the novelty, but a twelve-year old we put back there refused to go the second time we pointed towards the back-back. Even though the second row does slide slightly forward to increase legroom, adults will feel imprisoned sitting over the rear tires.

After the supercharged six was fired up, a traditional gear selector coaxed the Q7's transmission into Drive. With a stomp of the accelerator pedal the Audi sprinted off the line with eye-opening confidence – surprising as the curb weight is a hefty 5,192 pounds. There was plenty of torque at low speeds and it all went to the pavement thanks to Audi's standard Quattro all-wheel-drive system, which is designed to prevent any wheel slippage under all but the worst conditions. Around town, the eight-speed gearbox was smooth, doing a commendable job of keeping the supercharged six in the middle of its power band without excessive hunting. Of course, things weren't as spirited at speed on the highway when aerodynamic drag and two-plus tons of mass were working against acceleration. Our fuel economy was rather poor in the city cycle (we averaged about 14 mpg), but improved greatly on the highway when the on-board computer consistently delivered readings in the low 20s. That said, our highway economy numbers generally matched the EPA ratings.

The Q7 driving experience is unique. And that's meant as a compliment. In contrast to the BMW X5, Volkswagen Touareg and Mercedes-Benz M-Class (or G-Class, for that matter), the Audi doesn't wallow like a typical SUV. It drives like a tall car. And just as quiet to boot.

The handling was heavy, but never sloppy. It tracked straight on the highway, and it tackled canyons and onramps ardently. Its underpinnings are solid, and the wide stance and aggressive wheel and tire package only serve to help. Like most competent family-oriented SUVs today, the passengers are going to hurl long before the Q7 exceeds its capable grip.

Braking was also another strong suite. The Q7 is big, but standard six-piston front calipers and four-piston rear calipers (both sourced from Brembo) delivered fade-free stops time and time again. The braking system, complete with ventilated rotors and massive pads, is shared with the Porsche Cayenne. Brake dust is an annoyance, but a small price to pay for the performance they deliver. When properly equipped, the Q7 is rated to tow 6,600 pounds.


As the Q7 prepares to enter its sixth year of production, the question that's keeping Audi executives up at night is whether or not it can remain competitive rolling on its first-generation platform – until possibly 2014 – while its adversaries introduce fresh new product. The Cayenne, Touareg and M-Class are all new, and the third-generation X5 and MDX are expected within 18 months.

We're confident the Q7 has the resolve and appeal to compete with the rest of the pack. Its allure is tough to ignore, with its richly-detailed, isolated cabin and ability to coddle passengers with ease. Throw in its comprehensive standard electronics and foolproof Quattro all-wheel-drive system, top it off with a torque-rich supercharged six that delivers on both fuel economy and power, and Audi's SUV has a few more years in it. If just... 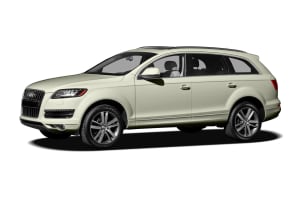