You don't have to take a trip to Egypt to know what the pyramid of Gisa looks like. It's an amazing feat of engineering, the construction of which continues to confound scientists to this day. But while Gisa is a true world wonder, Egypt is also home to many structures that were never completed. Half-built pyramids, obelisks that were intricately cut out of solid bedrock only to be left un-hoisted and 1,000-ton rocks that were dragged by hand for miles and left sitting unused. Why would anyone go through all that effort without finishing what they started?

We've long asked the same question about the Chrysler Sebring. Engineers took the time to come up with all the components needed to craft a new sedan for Chrysler, yet the steering, chassis and engines were woefully unfinished works. When looking at the Sebring, it's like designers threw darts at a wall to find the right sketch, and the same lack of completeness could be felt on the inside, where rubbery materials materials were assembled with the precision of a sofa cushion fort.

Luckily for Chrysler, the Sebring and those unfinished Egyptian objects have one more thing in common: They're both consigned to history. Chrysler's designers and engineers have worked together to right the wrongs of the Sebring, and those efforts have led to the newly named 2011 Chrysler 200. We spent a week with a nicely equipped Limited model to see if Chrysler's mulligan can go toe-to-toe with its peers in a very competitive mid-size sedan segment. Continue reading...

That Chrysler decided to change the name of the Sebring to the 200 should come as no surprise. The new naming structure makes sense given that the sedan's big brother is the 300, but the badge swap goes further than that. The Sebring was a train wreck of epic proportions, as then-owner Daimler cut budgets and rushed timelines to deliver a cost-competitive offering in the segment. What Chrysler got was a cheap, hot mess that needed massive discounts to be moved, mainly to rental fleets. Imagine working the counter at Avis and telling people that they're stuck with a Sebring. Talk about an easy sell to "upgrade" to a full-size Kia Amanti.

The 200 is still based on the Sebring architecture, but Chrysler claims to have made major changes to the steering, suspension, interior and exterior designs. Chrysler even added a new 3.6-liter "Pentastar" V6 that produces a best-in-class 283 horsepower. And while we still see a heavy dose of Sebring in every 200 we encounter, particularly the profile, the new sedan is at least slightly more handsome than its predecessor. The folks at Chrysler's marketing arm have taken notice as well, as the 200's Super Bowl commercial, which featured Eminem trolling the streets of Downtown Detroit, was the most talked-about spot that any Detroit automaker has crafted in years.

Our $28,505 Limited tester (a base 200 costs $19,245) came exceptionally well loaded with standard features, including 18-inch aluminum wheels, leather seating surfaces, an eight-way power driver's seat, remote start, heated front seats and side mirrors and Uconnect Voice Command with Bluetooth. Among the other options added to the spec sheet were the $895 6.5-inch navigation screen with 30GB hard drive, Sirius Satellite radio and traffic and an $845 power moonroof.

When it comes to mid-size sedans, an attractive exterior isn't always part of the recipe for success. Unfortunately for Chrysler, the Sebring was the malignant tumor of automotive design: lumpy, bulbous, rough around the edges and in need of immediate surgery. But that's the canvas on which Chrysler designers had to paint a reborn sedan, and the results are a solid effort that doesn't quite let us forget about the S-word.

The metal forward of the A-pillars is new, which means the straked hood, smallish and under-defined grille and retro headlight assemblies were cast aside. In their stead are classy LED daylight running lamps, a new chrome grille and a more masculine hood. Engineers also widened the track and lowered the 200 just a touch, which gives the sedan a slight air of aggressiveness. The rear end was updated as well, with a more stylized fascia cribbed from Jaguar that includes a tasteful chrome strip connecting modern-looking LED taillamps.

But while the changes to the 200 represent a substantial improvement, the one area that didn't receive attention brings back the not-too-pleasant memories of the Sebring. The bulging greenhouse from the Sebring carries over to the 200, and we couldn't be any less pleased. It's the part of the car that makes even non-enthusiasts say 'that looks like a Sebring.'

Chrysler seems to get that the 200's greenhouse is its Achilles heel, as all of the original press shots of the sedan were taken at angles that minimize the roofline at all costs. There were no profile shots, and even the three-quarter views are so-skewed they almost look like head-on photos. Even that now-famous Super Bowl commercial never shows the 200's profile. And it's two minutes long.

Just when we think we can't past that bulbous roofline, we step inside the 200's overhauled cabin. Before getting behind the wheel the difference is plain to see, with rich-looking materials, more attractive color combinations and a steering wheel as fat as they come. The cheap plastic has been swapped out for far cushier, higher end materials, while contrasting white stitching gives the cabin more class. Even the seats are changed for 2011, and our leather-wrapped thrones were plenty comfortable with a reasonable amount of bolstering.

Further improvements come on the tech front, as Chrysler has ditched the lousy stalk-based cruise control setup in favor of attractive, back-lit buttons on the steering wheel that are very easy to see and use. The biggest news, though, is reserved for Chrysler's Uconnect. Though not as feature-packed as Ford's Sync, Chrysler's infotainment system just works, and without all the brain-drain we've endured in other mid-size offerings. The 6.5-inch screen looks deceptively similar to the Sebring's nav, but this system is far snappier when called upon, showing us that the hardware behind the liquid crystal curtain is all-new. You can also store up to 30 GB of data on the vehicle's hard drive, but we were more than happy to stick with our iPod connected through the back-lit USB port towards the bottom of the center stack.

Not everything is perfect within the 200's cabin, though. The back seats aren't as roomy as those in the Toyota Camry or Chevrolet Malibu, and the 13.6-cubic-foot trunk lags behind the competition. Also, the 200 is a bit wider than the competition, yet front hip room is worse than Camry, Malibu or the Ford Fusion, while rear hip room bests only the Chevy.

The 200's interior is now competitive in the mid-size sedan segment, but how does she drive? First and foremost, our tester came armed with Chrysler's new 3.6-liter Pentastar V6, which packs 283 horsepower at 6,400 rpm and 260 pound-feet of torque at 4,400 rpm, and is mated to a six-speed automatic with a manual shift option. The combination of the V6 and the automatic yields solid refinement that's fine for the vast majority of drivers, though Honda and Toyota deliver smoother options. There were times we felt we had to work the 3.6-liter engine a bit hard to get our kicks, but overall this 3,559-pound sedan can scoot. Torque steer rarely rears its head unless you really get on the go-pedal, especially on wet pavement or with a fair amount of lock dialed into the wheel.

The last-generation six-cylinder in the Sebring was a testament to cost-cutting, but it was a crown jewel when compared to the car's atrocious ride and handling. The steering wheel was loosey-goosey, bumps felt like chasms and the chassis needed a double-dose of Prozac to calm the hell down. Most of those injustices were righted for 2011, starting with a lot more confidence coming from the wheel itself. Steering is no longer feather-light, with solid resistance that, while numb, is nevertheless reasonably accurate.

The 200's chassis is no longer the 'float like a butterfly' setup we detested om the Sebring. When hitting the curves, for example, the tallish 200 looks like a sedan that is just begging to exhibit body roll, but it doesn't. It could be the Goodyear P225/50R18 BSW All Season Touring Tires, or it could be the re-tuned suspension. It's likely both. But that's not to say that the 200's underpinnings are firm or crisp on the handling front; they're just not nearly as bad as before. We still felt a bit of vagueness where we'd like communication, and the stiffer chassis felt awkwardly synthetic.

On the fuel economy front, the 200 manages 19 miles per gallon in the city and 29 mpg on the highway. That's right about where the V6 Camry is, but it can't hold a candle to the 34 miles per gallon from the Hyundai Sonata Turbo. We managed 24.7 mpg during our time, which is right about where we expected. On the safety front, the 200 also manages a score of "Good" from the Insurance Institute of Highway Safety, earning it a Top Safety Pick award.

The Chrysler 200 is just about everything the Sebring should have been back in 2007, with a vastly superior interior, improved looks and a far better V6 under hood. But beating the Sebring is like clobbering the underweight, glasses-wearing math whiz on his way to chess practice. So where does the 200 fall in comparison to its current competition?

That's a different story. While the 200's cabin can stack up against nearly any in the segment and the new Pentastar V6 is certainly competitive with the other mid-size sedans, those are easily the 200's best attributes. When it comes to looks, refinement and especially reputation, the 200 still isn't near the top of the mid-size food chain. But in a segment with heavyweights like the Camry, Accord, Altima, Sonata and Fusion, at least the 200 can finally pop a squat at the big kids table, but it's still sitting on an unpadded folding chair and using plastic cutlery. It's nice to see Chrysler finish what it started, even it was five years too late. 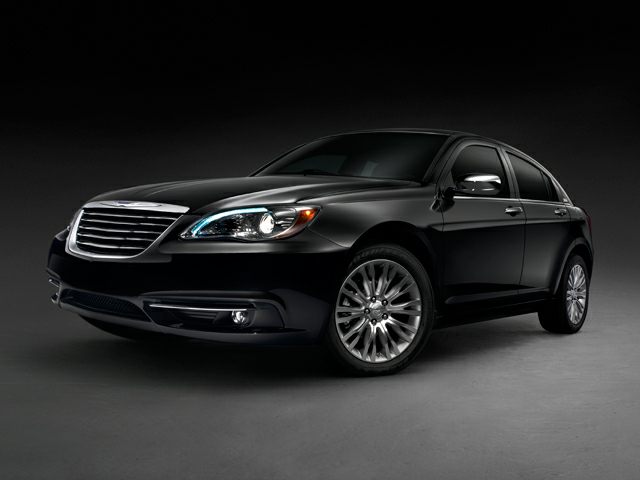