Late last year, we were among the first to drive the 2010 Ford Fusion Hybrid. Introduced at the 2009 Los Angeles Auto Show, the new Fusion model was a Howitzer shell across Toyota's bow. Even though Toyota is the now the world's largest auto manufacturer, Detroit is far from dead when it comes to making cars. The crisply styled Fusion convincingly beat the Camry Hybrid's mileage by 8 mpg in the city and another 2 mpg on the highway.

The Ford's documented high quality also helped to quiet voices in Washington, D.C. There, pontificators arrogantly proclaimed that no Detroit auto company possessed the talent or foresight to engineer a functioning Kleenex box, let alone a world-class, fuel-sipping hybrid sedan. How wrong they proved to be.

In addition to the Fusion Hybrids mileage of 41 mpg in the city and 36 mpg on the highway, one of this Ford's most interesting technical features is its instrument cluster. The automotive world has never seen anything like its full-color, driver-configurable LCD display in a production car. It's actually designed to make drivers more fuel efficient.

In addition to providing expected instruments like the speedometer and fuel gauge, the Fusion's SmartGauge cluster provides multiple gauge configurations, each presenting its own level of detailed information. Depending on what the driver wants to see, the display can be simple, or provide sophisticated information about the hybrid powertrain's operation and frugality. Several modes offer graphics that actually coach a driver to achieve greater efficiency. Ford calls the coaching "EcoGuide" and the special gauge their "SmartGauge."

What you'll see when you look through the steering wheel is a set of green leaves. The "Efficiency Leaves" are a graphical indication of a pilot's driving style; more leaves mean greener, more efficient driving. Rapid acceleration and hard braking cause leaves to drop from the vines. Leaves grow when the driver accelerates gently, coasts, and brakes smoothly to help recharge the hybrid's batteries.

"A child sitting in the back seat can recognize efficient driving techniques just by watching the leaves grow," said Sonya Nematollahi, the Fusion's Driver Information Senior Engineer. She led the development of the SmartGauge project from start to finish.

"Right from the start of the Fusion Hybrid project, we knew we didn't want a simple, boring display of numbers or a bar graphs," Nematollahi said. "We wanted to create a display that provided an emotional connection between the car and driver, and even between the car and its passengers."

The SmartGauge offers four general display levels using the two high-resolution LCD monitors on either side of the analog speedometer:

"SmartGauge is quite different from anything else that's out there," Nematollahi said. "Even though the new Toyota Prius and Honda Insight came out after the Fusion, their clusters aren't anything like ours regarding looks or performance. SmartGauge really coaches the driver."

True to Nematollahi's description, the 2010 hybrids from Toyota and Honda use simpler graphics to track mileage and efficiency.

"We wanted to offer different ways to display the information so that drivers can take in the data in a way that fits them," she said. "If they're feeling more emotive, they can watch the Efficiency Leaves grow. If they're felling more technical, there is a bar graph that displays the same kind of information."

Ford leaned on the expertise of numerous experts in design to help come up with display, including Smart Design and IDEO.

"We developed the SmartGauge with several different suppliers and many groups within Ford, so we had literally hundreds of ideas on what the gauges should look like," she said. "It took months to settle on what you see. The idea of 'green' going with leaves was always something we wanted to do, but then we handed the idea over to one of our designers, and then it came to life."

Ford's process wasn't without its hiccups, however.

"We had some ideas that we thought were great, but when tested didn't work," she said. Nematollahi explained how the an early version of the Hybrid's current three-dimensional fuel gauge looked as if it were filled with had liquid.

"The moving fluid slowly sloshing around in that gauge made people motion sick," she said. "So, we dropped that idea." 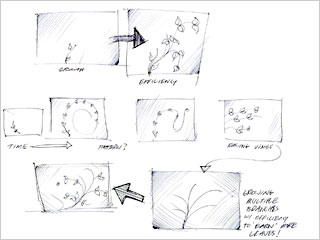 Ford's internal sketches show the progression of
the leaf design

An Engineer Unlike The Others

A career engineer at Ford, Nematollahi told us that she came to the U.S. when her family fled Iran prior to the Islamic Revolution.

"We moved to the U.S. in 1978, just before everything collapsed," Nematollahi said. "I was just in high school when we left the country and everything we owned behind. This was so hard for my father because he was a successful civil engineer. We came here with nothing."

Even though her father wanted her to become a doctor or a lawyer, she always knew she wanted to be an engineer. Her dreams were realized after she completed her undergraduate work at The University of Toledo (Ohio) and graduate studies at Wayne State University (Michigan). Nematollahi started with Ford as an intern and never looked back.

Upgrades Will Be Easy

"Because the LCD displays are just like high-end computer monitors, what we show on them is controlled by software, so it's totally upgradeable," she said. "If we come up with new ideas for gauges, or if customers tell us that they want something different, we can upload a new gauge package with a simple reflash."

Like other automakers, Ford has discovered that with instant fuel economy information at their fingertips, drivers can learn to drive more efficiently. SmartGauge with EcoGuide helps speed the process, and that is exactly what Nematollahi and her team were hoping to do. 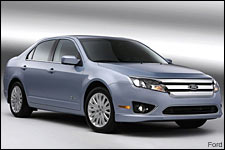 "We wanted to deliver an instant 'reward' for driving efficiently," she said.

To see SmartGauge in action, visit a Ford or Lincoln-Mercury dealership. The Fusion and Milan Hybrids both feature the SmartGauge, and each car includes two demonstration modes. The dealer demo provides a quick overview of the cluster's benefits to prospective buyers, while the owner tutorial mode delivers a more in-depth look at its features and functions. The Fusion Milan Hybrids are the first production cars to have "self-help" capability built into the cluster.