The latest system found in the ID.4, GTI and Golf R catapult VW forward into the future

I had very few complaints about the 2021 Volkswagen Golf R in my first drive last week, but the execution of its fancy, new tech was the biggest one. There are certainly issues, but it’s nuanced enough to warrant this separate review where I’ll go into greater detail about what this new infotainment and tech interface is good at and where it falls short.

VW calls this new interior the “digital interior,” and it does so for good reason. The whole thing is digitized in a way that Volkswagens of the past never were. It brings into question where the infotainment system starts and ends, as the days of a screen being separate and unlinked with the various buttons and knobs on the dash are over. And in VW’s case, the survival rate of buttons and knobs in general is low. New, budget-oriented cars like the 2022 Taos still feature VW’s old interior philosophy, but that isn’t the case for its flagship products like the GTI, Golf R and ID.4. This review only applies to those latter three, as the next-generation systems found in those cars are so different from others (in the Tiguan, Passat or Atlas) that VW’s digital roots are hardly recognizable anymore. VW's other models will eventually get similar systems, but it'll require Volkswagen transitioning those models to the new electronic architecture that enables it in the ID.4 and new-generation Golf.

The 10-inch high-res touchscreen integrated into a cowl that bends around the driver (in the GTI and Golf R) is this infotainment system's crown jewel. It’s a fast-responding touchscreen that is easy to reach and canted toward the driver in a way that still makes it possible for the passenger to easily use it. Responsiveness and speediness is top notch. You can swipe and tap around the screen as though you’re using a high quality tablet, and it didn’t exhibit any lag. There are no touchpads or scroll wheels to control it with, so it’s a full touch experience. 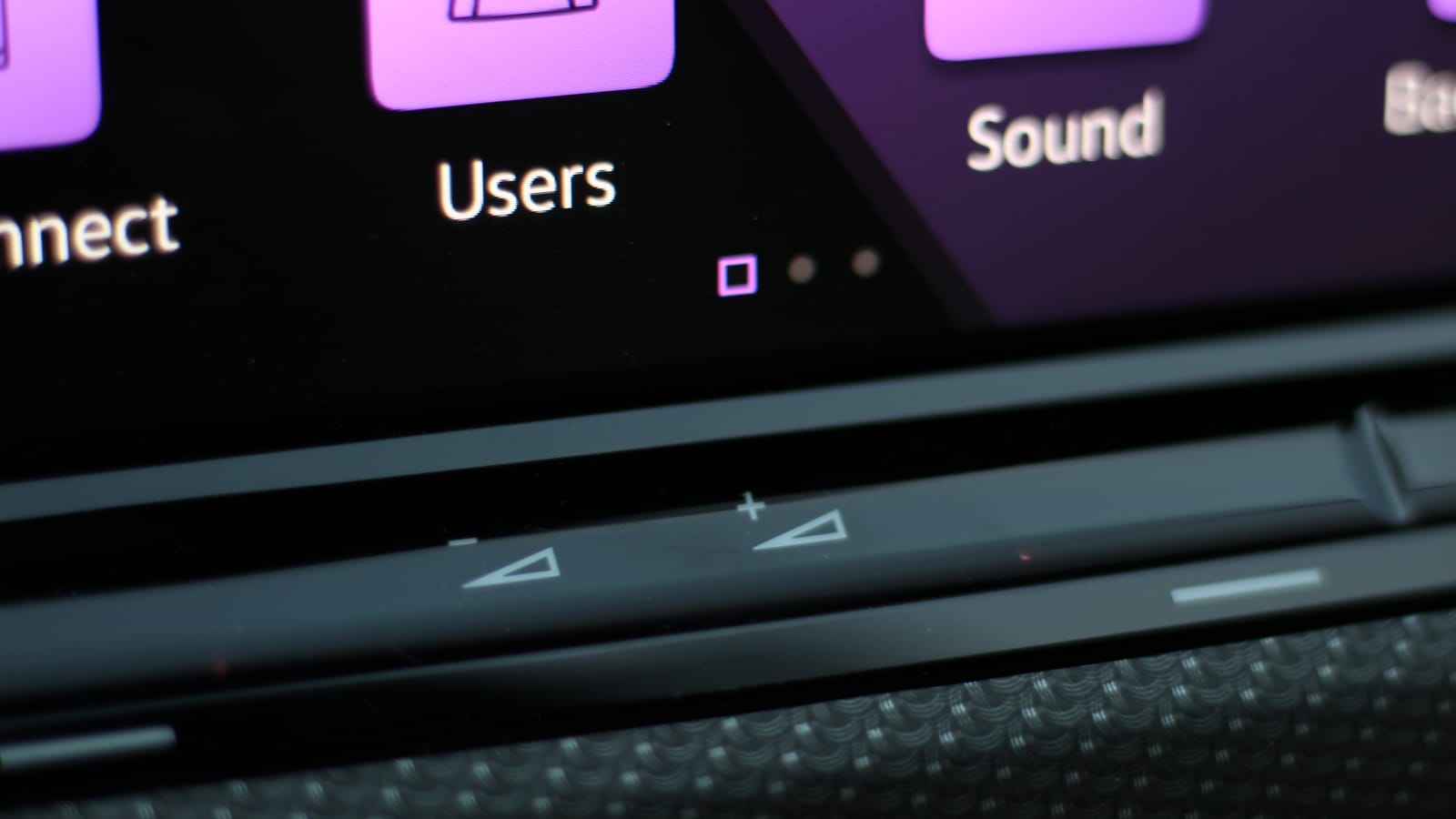 That touch experience extends to the rest of the interior, too, as VW decided that touch haptic controls are what’s in these days. Unfortunately, these controls are where things fall apart. There is no simple volume knob. Instead, VW gives you a volume slider integrated into a slab of piano black plastic that juts out right below the 10-inch screen. Here you can tap on the +/- buttons or slide your finger back and forth to change the volume. This interface was a terrible idea when Lincoln and Cadillac tried to do the same thing several years ago and it's just as annoying in a VW today. Tapping over and over again to crank the volume one way or the other is tedious work, and the slider works sometimes, but other times it struggles to read swipes. And then there’s the placement of said touch controls. They’re right where I would love to rest/brace my hand to use the infotainment system. But do that, and you’ll accidentally jack the volume up. Or! You’ll errantly adjust the climate temperature controls that flank the volume slider and are also touch controls.

The solution? You either have to find the perfect spot to rest your palm in between the volume and climate controls, or simply freehand the touch controls. Anybody that’s tried to work a touchscreen while traveling down a bumpy road (especially in a car with a sport-tuned suspension) will know that stabbing away as your arm moves up and down will often lead to errant selections. It’s fine if you’re stopped or on smooth pavement, but this design will inevitably lead to frustrations as an owner.

In good news, the “Discover Pro” infotainment’s interface is simple to use. It’s like an old iPhone, back when they had “home” buttons. There’s a “home” button on the far left of the screen that will always bring you back to the main array of apps from anywhere. You can scroll up and down through app icons or swipe across to find what we'll call widgets. There are tiles for navigation, trip data, current media and so on that can be moved around and customized. And if customization is your thing, VW allows you to change the colors of the infotainment system, digital instrument panel and ambient lighting. It’s about as customizable as cars get in 2021 from this perspective. 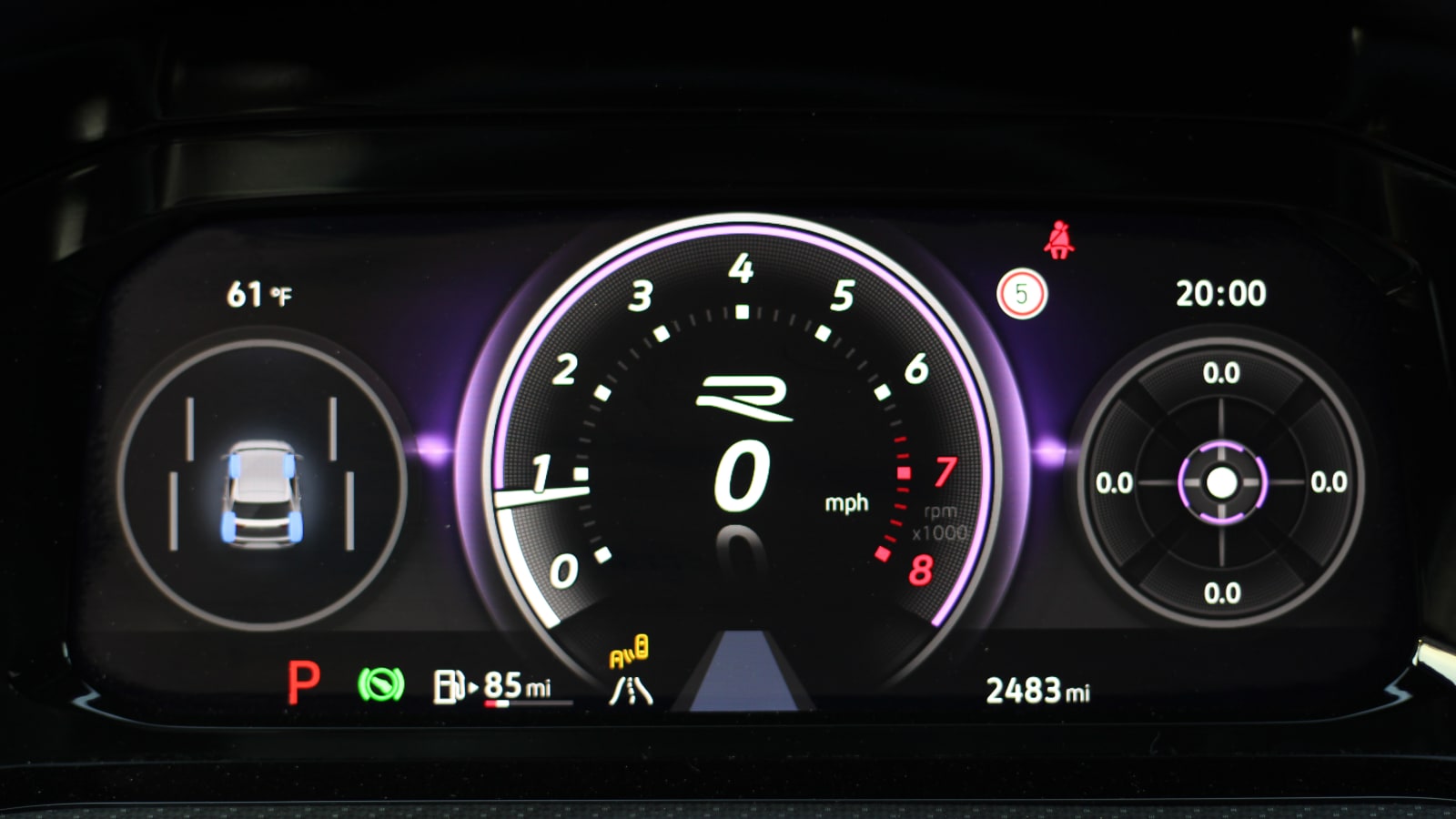 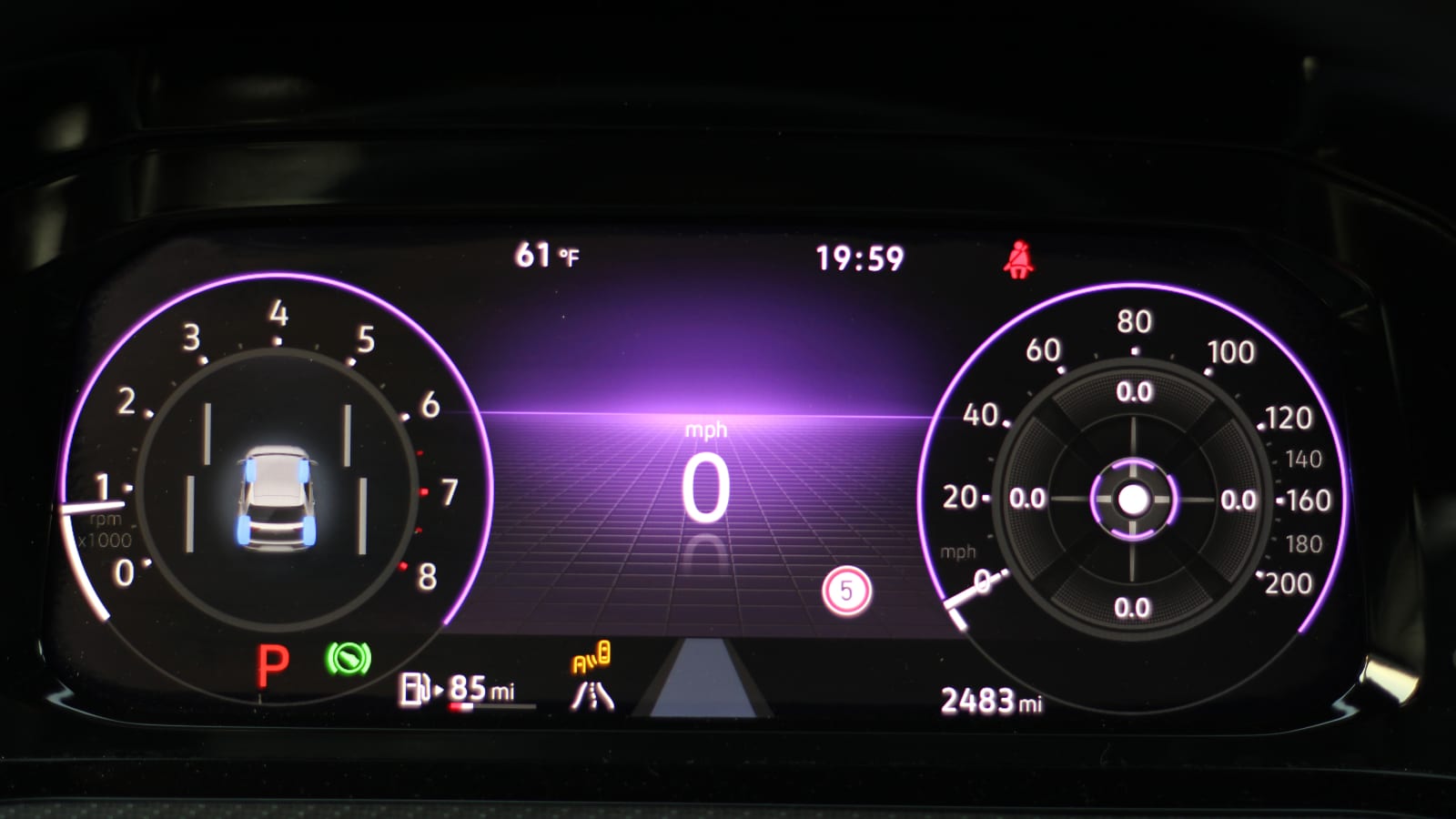 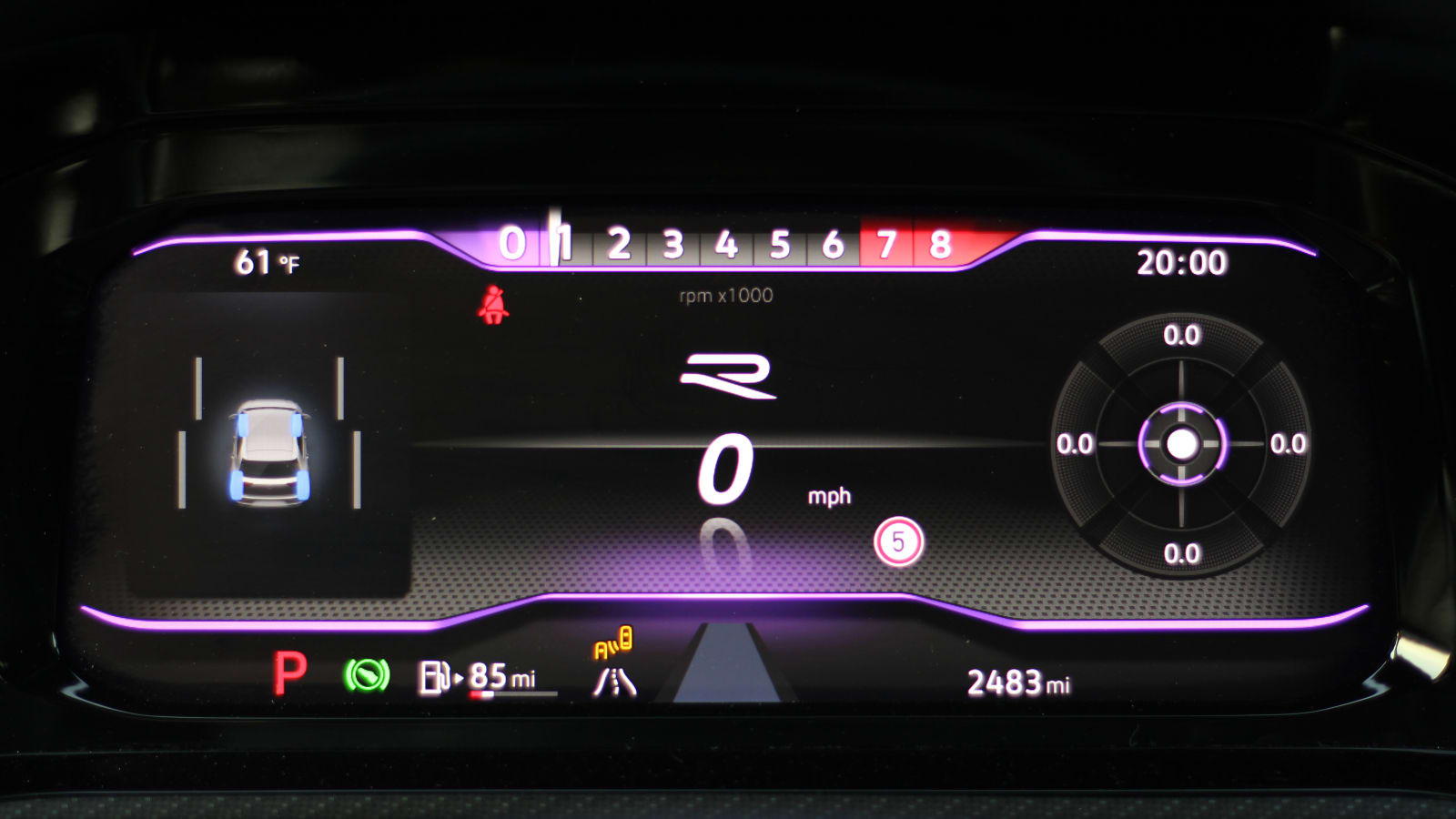 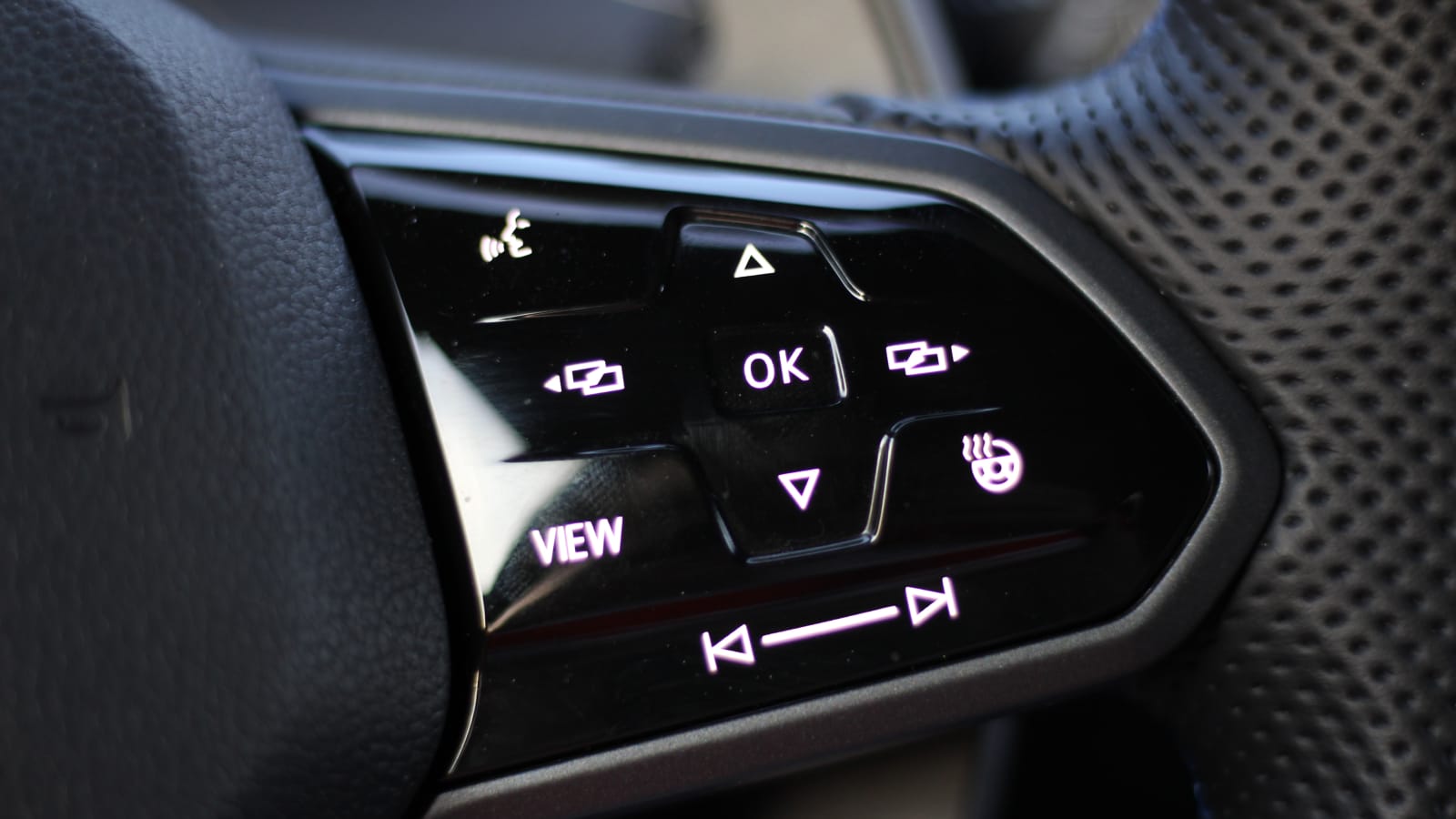 That digital cluster is named the Digital Cockpit Pro now, and it’s a 10.25-inch screen in front of the driver. Multiple view modes are available, and models like the GTI and Golf R get special performance views that display the most important information in an easily digestible format. There’s even a new steering wheel to control that cluster. It features the same touch haptic buttons as the new Arteon’s steering wheel does. Turning up the volume or skipping to the next song is far easier on the wheel itself, as in addition to the touch controls, you can just press down on them like a traditional button, and it works flawlessly. VW’s fancy, digital steering wheel is the best we’ve tried so far, and it even works better than Mercedes’ new haptic touch wheel on the E-Class.

The only other buttons you’ll end up using in the cabin are shortcuts for the infotainment system built into the dash by the vents. Squished into their tiny area, you can bring up menus here for oft-used settings like the driver assistance systems or climate controls. Volkswagen went to such great lengths to keep the dash free of actual buttons that it even put the front and rear defroster buttons in with the headlight controls to the left of the steering wheel — just remember that for the first icy day with your new GTI.

This cacophony of technology is a step forward for VW when you look at it from an aerial point of view. There are certainly some details that need some work, but Volkswagen is well and truly into the digital age now. You get the expected features of wireless Apple CarPlay and wireless Android Auto alongside the 2021-feeling user interface. I know I’ll be nostalgic for VW’s previous arrangement of oh-so-German buttons and knobs, but there’s no doubt this flashy, new philosophy for infotainment is catapulting VW interiors into our tech-focused world with enthusiasm.