Revisiting the sports-car twins and considering what’s next As you get older, you realize you need less of some things. Alcohol. Sleep. Horsepower. Five beers turns to three, which inevitably turns to a glass of LaCroix over ice. It’s simplification. So is the case of the Toyota 86 and it’s still nearly identical twin, the Subaru BRZ.

The 2022 Toyota GR 86 debuted Monday and sales kick off in the United States this fall. It’s listed with 232 horsepower derived from the Subaru-sourced boxer-four cylinder, up just a tick -- four ponies -- from the new BRZ’s figure. Toyota hasn’t confirmed U.S. specs yet, but expect a similar output nominally ahead of Subaru, as Toyota says it’s tuning the 86 more aggressively for performance. We’ll see. Regardless, the new 2.4-liter mill offers a nice leap over the current cars’ 205-hp 2.0-liter four. Plus, torque is now 184 pound-feet at 3,700 rpm, compared with the 156 lb-ft rating at 6,400 rpm of the 2020 Toyota 86. That will change the feel of the acceleration in a good way.

The 86 and BRZ are true sports cars. They’re recreational activities to drive, requiring skill, awareness and coordination. They’re a bit of a dying breed. I’ve spent a good deal of time in both cars, including the 86’s predecessor, which was badged the FR-S and given to Scion in a failed bid to keep the brand relevant.

On a rainy Saturday last summer with nowhere to go, I slipped into the 86’s bolstered seats and took off, making my way around town for my own enjoyment. It’s startling how loud and coarse the cars can be, and the 86 greeted me with a raspy start-up. Accelerating from lights in second gear, I let the revs soar north of 6,000 rpm until higher shifts became necessary. The boxer powerplant has long been criticized for its modest output, but the 86 only weighs about 2,800 pounds depending on trim, and the new models will tip the scales in similar fashion.

Enthusiasts seek out and buy these cars for their dynamics. Everything is immediate. The brakes offer instant feedback. The steering is almost impossibly direct. The six-speed manual is precise and the clutch is heavy yet not overly springy. They’re firm cars to drive, flirting with the edge of severity. You could consider the 86 or BRZ for a daily driver, but that depends on your commute. They’re loud as hell on the expressway. The low center of gravity is great for handling, but you’re inches off concrete in these cars. Heavy traffic can be stressful.

That’s said, the visibility is good and these cars shine on the open roads, conquering turns and bends with flourish. They’re throw-backs to a period from the early 1960s to mid-1980s when things like the Jaguar E-Type, Datsun 240Z and Toyota’s own 2000GT popularized imported sports cars with style and engaging dynamics.

Like Subaru already telegraphed with the 2022 BRZ, Toyota is holding the line with the 86. We didn’t expect significant changes or even much differentiation between the two cars as part of their friendly rivalry, but they endure. Lightly changed yet in purposeful ways. The more powerful engine will make a difference and the cars’ mere presence is a positive sign Toyota and Subaru aren’t giving up on this sparsely-populated niche, where minimalism is desirable. 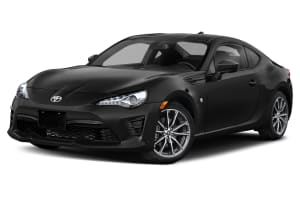