This is Jeep's first credible electric Wrangler, but it's not a conventional EV The Easter Jeep Safari has become synonymous with factory-backed concepts and customs, and this year is no different. The headline grabber of 2021 is called the Jeep Magneto, and it's truly unlike anything the off-road brand has ever assembled. As its name hints, the Magneto is fully electric, with an electric motor under the hood that hooks up to a standard six-speed manual transmission that sends power to solid front and rear axles through a two-speed transfer case.

To be sure, this is not a typical electric car concept. Electrification usually equals a chance to completely rethink traditional car-building and designing techniques. In the case of the Magneto, however, all of the powertrain bits — which includes the motor and several battery packs — has been hidden inside a stock steel Wrangler Rubicon chassis and bodywork. It's unconventional in that it's all rather conventional. 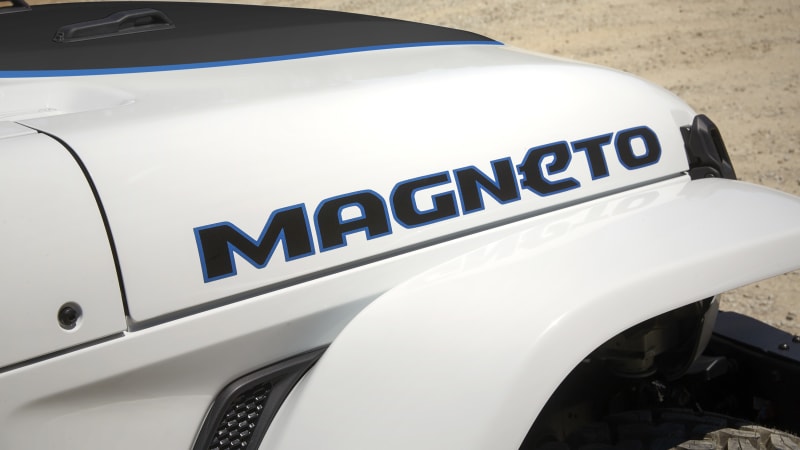 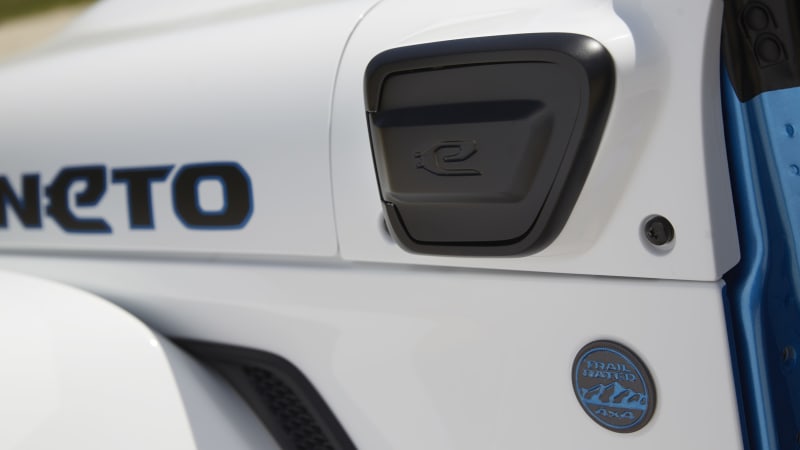 The motor is a custom axial-flux design by Jeep. It has been tuned to exactly match the standard 3.6-liter V6 engine that would otherwise be under the Rubicon's scooped hood. That means 285 horsepower and 273 pound-feet of torque. But the way the 800-volt motor delivers its power depends on the driver's right foot — under normal conditions, the difference between the motor's power curve and its gasoline-fueled equivalent is "negligible except for near-silent operation." But if the driver pushes the pedal to the floor, the motor will instantly send all 273 lb-ft to the wheels at once, resulting in a 6.8-second 0-60 time.

While shifting duties are left up to the driver, the manual transmission and ultra low gearing through the Rubicon's 4:1 transfer case mean that it's possible to inch the Magneto over and through obstacles at ridiculously low speeds. It's not necessary to use the clutch to start moving since there's no engine idling away underhood, but the clutch is required to shift between gears. Unlike most electric vehicles with single or two-speed gearboxes, shifting through the Magneto's six ratios will likely be necessary because the electric motor's rev range tops out at 6,000 RPM.

There are four lithium ion battery packs nestled within the Magneto's frame rails. The first pack replaces a standard Wrangler fuel tank, the second is mounted across the frame from the first, a third pack sits on top of the motor under the hood and the fourth pack fills the rear storage compartment and extends downward where the exhaust muffler would otherwise sit. Each pack is encased in a waterproof milled aluminum enclosure, and all the electronics are tucked in tight and protected by custom skid plates and a steel underbody pan. All those batteries and cases add plenty of weight, bringing the Magneto to 5,750 pounds. In total, the packs equal 70 kW/h, but Jeep isn't quoting any range or charging time estimates. 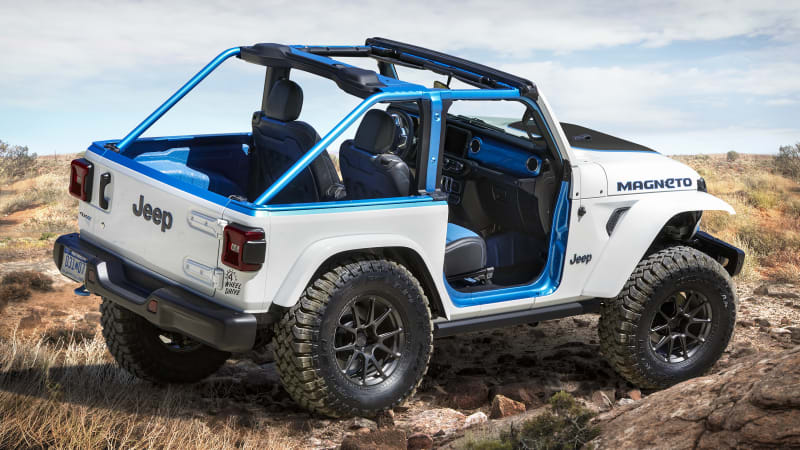 In addition to those four battery packs, a pair of 12-volt batteries power what remains of the Magneto's stock Wrangler electrical bits and pieces along with accessories that include a Warn winch. A converter charges the 12-volt batteries from the four big packs, which means there's a lot of juice available to power equipment outside of the vehicle. A powerful electric heater keeps the cabin toasty. A two-inch lift, 35-inch tires and unique exterior lighting have been added, and the Bright White and Surf Blue exterior pairs well with Royal Blue and Black leather seats with Sapphire-colored inserts.

Jeep plans to haul the Magneto to Moab for three straight Safaris to learn how its electric Wrangler works in real off-road conditions. The engineering team will continue to refine the electric motor, presumably adding additional power and capability along the way. It's not really clear what will result from all this testing, but Jeep is definitely considering how its traditional off-roaders will work in an electrified future. Will a future production vehicle result from the lessons learned by its Magneto test bed? And if so, will it be a similar retrofit design or a complete Wrangler rethink? We look forward to finding out.