Elvis Presley owned this GMC pickup. Now you can, too

The King bought it new for use on his Mississippi ranch Befitting his status as America's first rock star, Elvis Presley lived large. Among his many excesses, Elvis was well known for his prolific new-car purchases. Mostly, it seems the King favored Cadillacs and Lincolns — although, during his Army stint in Europe, he picked up a BMW 507 roadster. Here we have something different from the Elvis Presley canon: a 1967 GMC pickup. And this GMC will be crossing the block at the GAA Classic Cars auction on February 27.

This GMC is one of three that Elvis purchased from Guy Caldwell Motors in Senatobia, Mississippi, almost exactly 54 years ago: on February 7, 1967. He bought a red one, a blue one, and this green one for use on his Circle G Ranch in Horn Lake, Mississippi.

According to a badge on the glovebox door, this pickup is a GMC Cheyenne Super, which sounds like a fancy-pants trim level, although the truck still looks pretty bare-bones to our eyes. The steel wheels have dog-dish hubcaps, and the grille and bumpers are painted white rather than chrome. It's a standard-bed half-ton pickup and is powered by a six-cylinder engine with a three-on-the-tree column-shift manual transmission.

The truck spent just over a year on the ranch before being sold off. It then went through a series of owners and several museum stints. Among the paperwork included with a sale is a letter from Elvis Presley Enterprises confirming that a GMC pickup with this VIN number was bought new by Elvis. 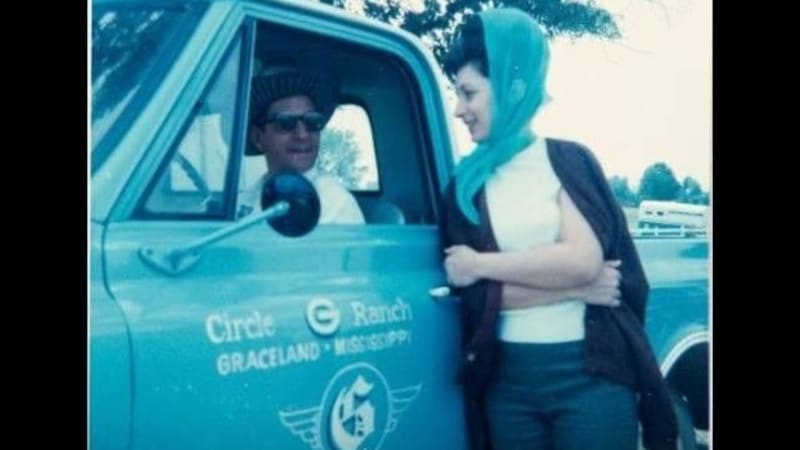 It has now been restored, so there shouldn't be a whole lotta shakin' going on. The truck has been repainted green, although the side mirrors are different than what's shown in a vintage photo, and the chrome trim along the sides is missing. More notably, we'd like to see the "Circle G Ranch" logo it once wore on its doors be added.

No pre-sale estimate is given. The final hammer price for this GMC will depend on the degree to which bidders are all shook up at the prospect of owning one of the more unusual Elvis Presley vehicles.