Ferrari says it's not interested in becoming an electric-only brand

It will continue to embrace electrification, though Ferrari is open to electrifying its cars, but it's not planning on fully ditching internal combustion technology in the near future. Its top executive confirmed he doesn't want to make the Prancing Horse an EV-only brand.

"My own sense is that to sort of say 100% electric, that's pushing things. I really don't see Ferrari ever being at 100% EV. And, certainly not in my lifetime it will reach even 50%," said Louis Camilleri, the company's 65-year old CEO, during a conference call with investors.

Ferrari entered the hybrid segment before most of its rivals; the LaFerrari unveiled in 2013 used an electric motor and a Formula One-derived Kinetic Energy Recuperation System (KERS). It released its first series-produced plug-in hybrid model, the SF90 Stradale (pictured), in 2019 and celebrated it as the most powerful road-going car it has ever built. It's certainly not opposed to electrification, but taking the engine out entirely poses problems.

And yet, Ferrari can't skirt the government regulations forcing carmakers to build cleaner models, so an electric model will likely end up joining the range. It won't arrive before 2025, and it'll be the exception, not the rule.

Not every company whose stake is planted in the hypercar segment agree with Ferrari's assessment. Lotus is putting the final touches on the Evija, which will offer drivers a 2,000-horsepower punch, while Croatian start-up Rimac is busy crash-testing the C_Two, a limited-edition hypercar with 1,914 horsepower. Pininfarina — the brand, not the storied design house — still hopes to bring the $2.2 million Battista to the market in 2021. 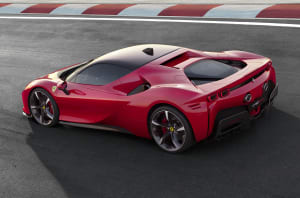