It's powered by a diesel engine from a heavy-duty truck 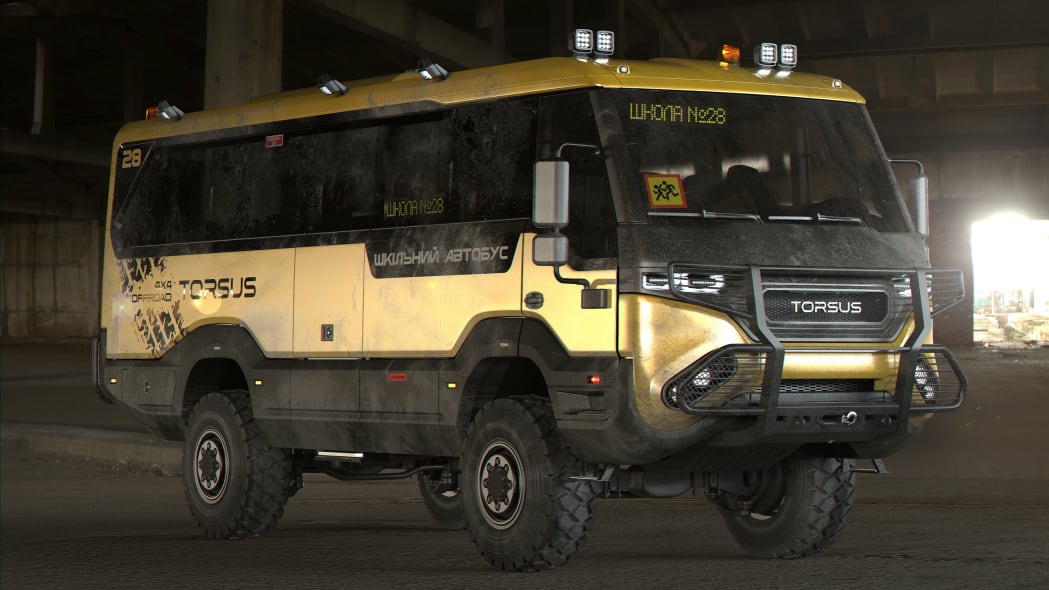 Riding in a yellow school bus is part of growing up for many Americans, but it's an experience most of us are happy to leave behind the minute we get a driver's license. Czech Republic-based firm Torsus has unveiled a giant bus named Praetorian that was built for off-roading, and we wouldn't mind hitching a ride in it even as adults.

Shaped like the box it came in, and styled like something from the Matchbox catalog, the Praetorian is one of the most extreme factory-built school buses we've ever seen. It's equipped with a bull bar, over a dozen roof-mounted LED lights, and Michelin tires that wouldn't look out of place on mining equipment. Although the odds of encountering other vehicles on the type of school run this bus was designed for are rather low, Torsus didn't forget to add the little flip-out stop sign that tells other motorists that kids are about to cross the street.

Inside, up to 35 kids can travel on individual seats upholstered with various math and science formulas. Getting in requires a high degree of flexibility, but it's well worth it; the large side windows promise to give the passengers a stellar view of whatever active volcano they're climbing on their way to class.

Many of the components under the body are sourced from MAN, a manufacturer of heavy-duty trucks that's part of the Volkswagen Group — at least for now. Torsus built the Praetorian on an upgraded MAN frame, and power comes from a 6.9-liter turbodiesel straight-six that sends 290 horsepower and 848 pound-feet of torque to the four wheels via a nine-speed manual transmission. Its top speed checks in at 62 mph, but buyers are far more likely to care about its approach and departure angles of 32 and 26 degrees, respectively, and its ability to drive through 35 inches of water. Torsus notes modifications can improve most of the aforementioned figures if needed.

Pricing for the school bus hasn't been announced, but keep in mind the standard Praetorian starts at 153,000 euros (roughly $181,000) without any equipment inside; it's just a big, empty box buyers can outfit in whatever way suits them. At the other end of the spectrum, the Expedition model that looks capable of taming Antarctica is priced at 368,000 euros (about $453,000). We're guessing the school-bus configuration is closer to the bottom part of the scale, but it's nonetheless a lot more expensive than the average Bluebird zig-zagging across the nation.