Italian coachbuilder Caselani resurrected an obscure, often-forgotten model from Citroën's past to offer van buyers an additional retro-styled option. Called Type HG, it's based on the current-generation Citroën Jumpy.

One of the French carmaker's best-known vintage vans is the Type H, which was built with only minor changes from 1947 to 1981. It's aged into a sought-after classic that's popular as a food truck and as a camper from Paris to Sydney. Few realize Citroën planned to release a smaller model named Type G which looked almost exactly like the H but used an air-cooled flat-twin engine shared with the 2CV. Several prototypes were made, but the project was canned in favor of the 2CV-based, nine-horsepower AU van released in 1951.

It's this little-known prototype that only exists in Citroën's official heritage collection and in the minds of the most indoctrinated French car enthusiasts that Caselani chose to bring into the 21st century. And, because the Type G (shown below) was a shrunken copy of the Type H from a design standpoint, making a body kit that fits the Citroën Jumpy was relatively simple. Caselani liberally borrowed styling cues from its modern version of the Type H, which is based on the larger Citroën Jumper sold as the Ram ProMaster in the United States. It adds a new-look front end with a vertical grille, chromed chevrons, and round headlights positioned as far out of the body as regulations permit, corrugated body panels, and a redesigned rear end. Whitewall tires are optionally available. 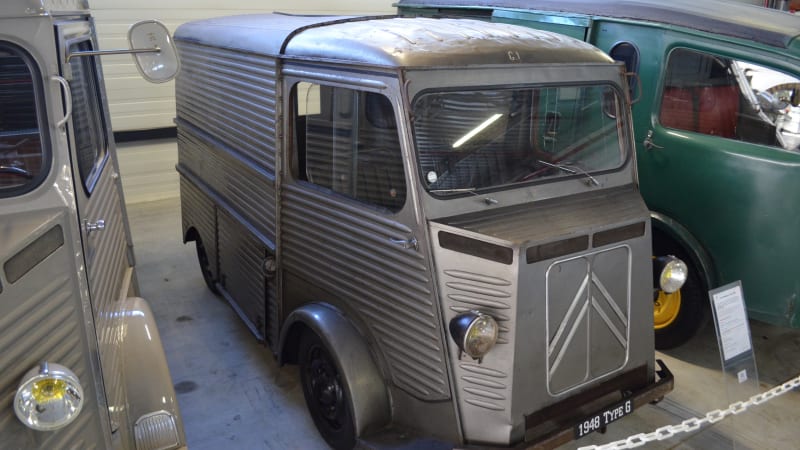 Caselani offers the Type HG as a passenger van, a crew-cab van, and a panel van. Pricing starts at 29,400 euros before taxes are factored in, a sum that represents about $35,000 and that corresponds to a short-wheelbase panel model powered by a 100-horsepower, four-cylinder turbodiesel engine. Alternatively, motorists who already own a Jumpy can purchase the transformation kit on its own for 14,800 euros (about $17,500). For added peace of mind, Caselani pointed out the conversion was created with Citroën's input, and the brand authorized the kit.

We know what you're thinking: what on earth is a Jumpy? Glad you asked!

It's a van positioned in the middle of Citroën's commercial range. It slots between the Berlingo, which competes in the same segment as the Ford Transit Connect, and the Jumper, which is marketed as an alternative to the Ford Transit. It's close in size and positioning to the Mercedes-Benz Metris sold in the United States, and it's a hugely popular model in some parts of Europe. If you call a plumber in France, there's a good chance he'll show up in a Jumpy.

It's also sold by Peugeot (Expert), Opel (Vivaro), and Toyota (ProAce). And, because the name Jumpy sounds more like a clown on a trampoline than a panel van in English, it's known as the Dispatch in the United Kingdom.