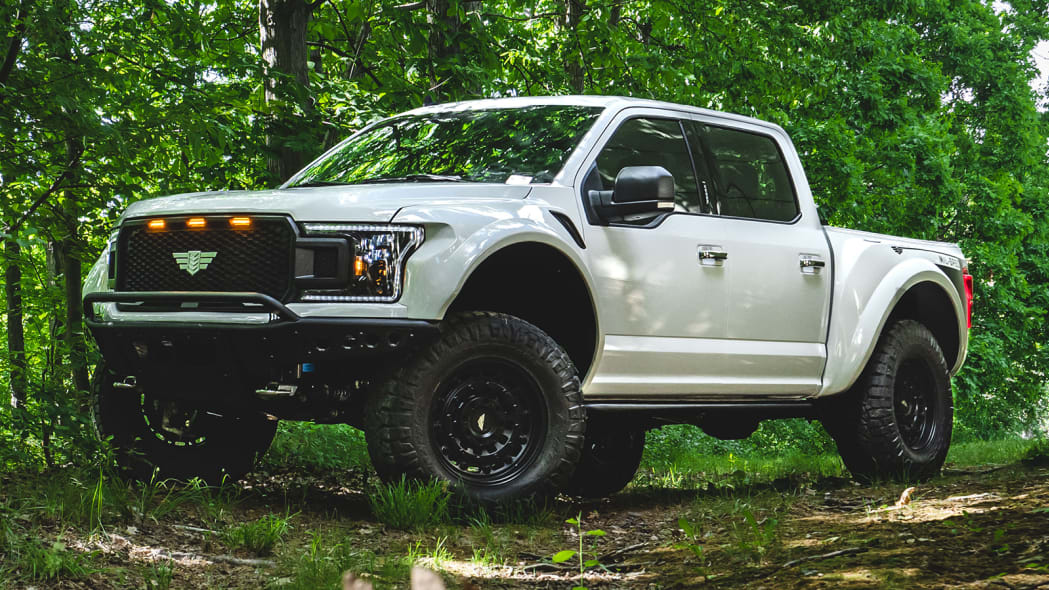 Over the past few years, automakers have discovered that people love high-performance off-road pickup trucks. The Ford F-150 Raptor really kick-started the trend, with the Chevy Colorado ZR2, and now the Ram 1500 TRX following. Off-road-oriented trims are following closely behind like the Silverado Trail Boss. Despite this off-road boom, there are some niches left to fill, and Mil-Spec Automotive, a company that first became known for its major resto-mods of Hummer H1s, has found one. Its modified F-150 is there for someone who wants a Raptor but needs a V8 rumble, and something even beefier looking. It certainly fits the bill with only some minor compromises.

So what exactly does the Mil-Spec F-150 come with? Well, quite a lot. The company starts with a V8, four-wheel-drive F-150 with a factory differential lock. Mil-Spec will upgrade any F-150 with those features from a lowly XLT to a top-of-the-line Platinum. The company representative we talked with recommends going with a lower trim, though, since some of the equipment from high-trim trucks will be replaced or removed, so there’s no reason to spend more money than is necessary. 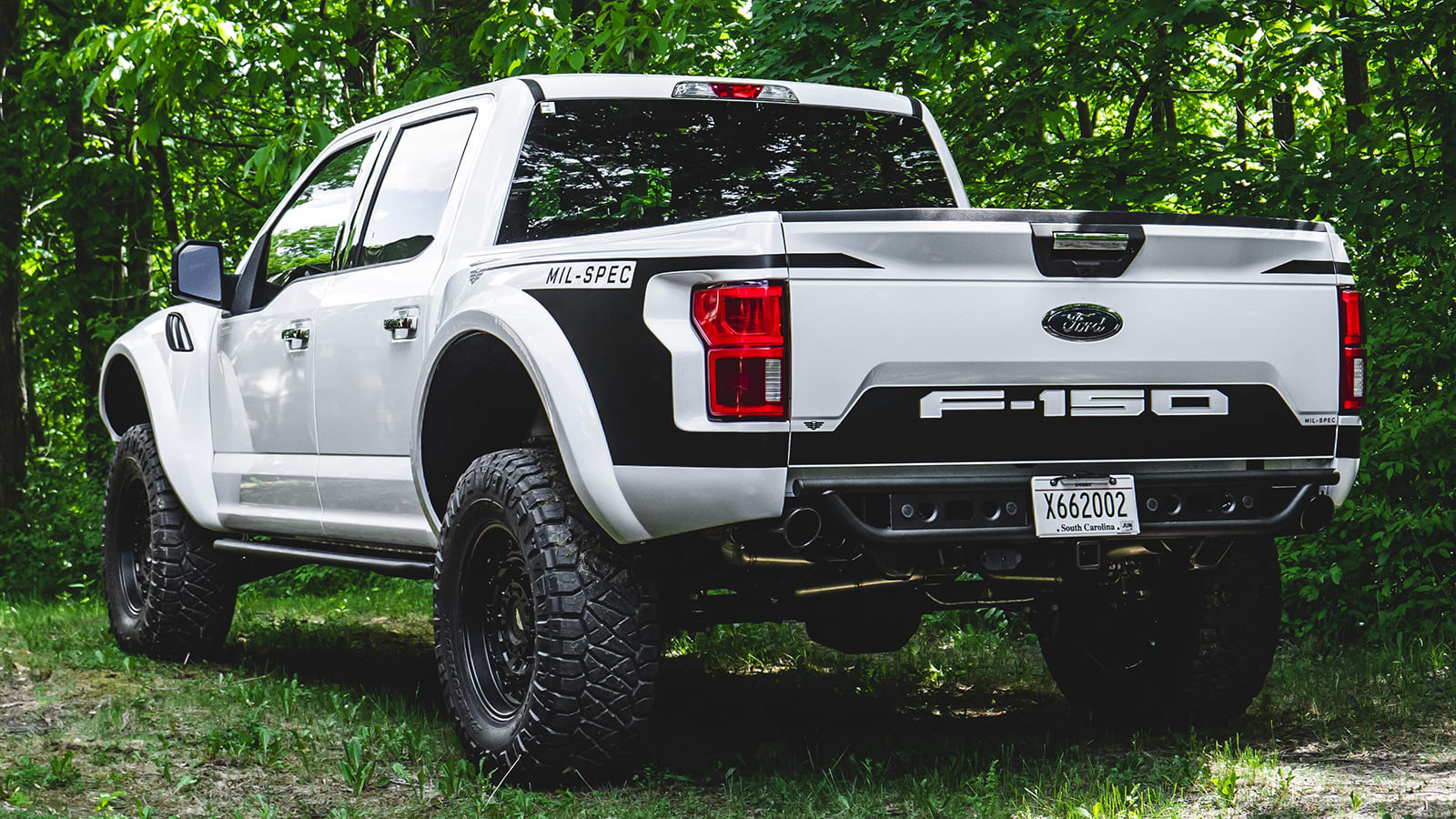 On the outside, Mil-Spec fits fiberglass pre-runner style fenders that house 37-inch tires wrapped around 20-inch Black Rhino wheels. Helping the truck clear these giant tires are the optional Baja Performance Suspension Package with adjustable Fox 3.0 remote reservoir coilover shocks with Eibach springs at all four corners and BajaKits long-travel control arms at the front. They bring wheel travel to 11 inches at the front and 12 inches at the back. Addicted Desert Designs steel bumpers are fitted along with a custom grille with Raptor-style LEDs, a large aluminum Mil-Spec badge, and Mil-Spec graphics for the tailgate and rear fenders. The result is a steroidal Raptor, but the fact that Mil-Spec uses some more low-key wheels and only builds these trucks in black, white, or two shades of gray helps keep it from looking too absurd.

Under the extreme exterior are some mild engine and interior upgrades. Mil-Spec adds a Ford Performance throttle body, intake and engine calibration to boost power up to 500 horsepower. A Borla cat-back exhaust adds some noise, and Mil-Specs custom tips come out right next to the steel bumpers so they don’t dangle in a vulnerable spot.

Inside, Mil-Spec adds Katzkin leather upholstery in black, gray or tan, closely matching the factory Ford colors, billet aluminum caps for the control knobs, a Raptor steering wheel with functional shift paddles, and custom aluminum badges. These interior changes are very subtle, but also rather nice. The aluminum knobs feel great in hand, and the subtleness of their design along with the closely matched leather gives the interior a near-OEM look. 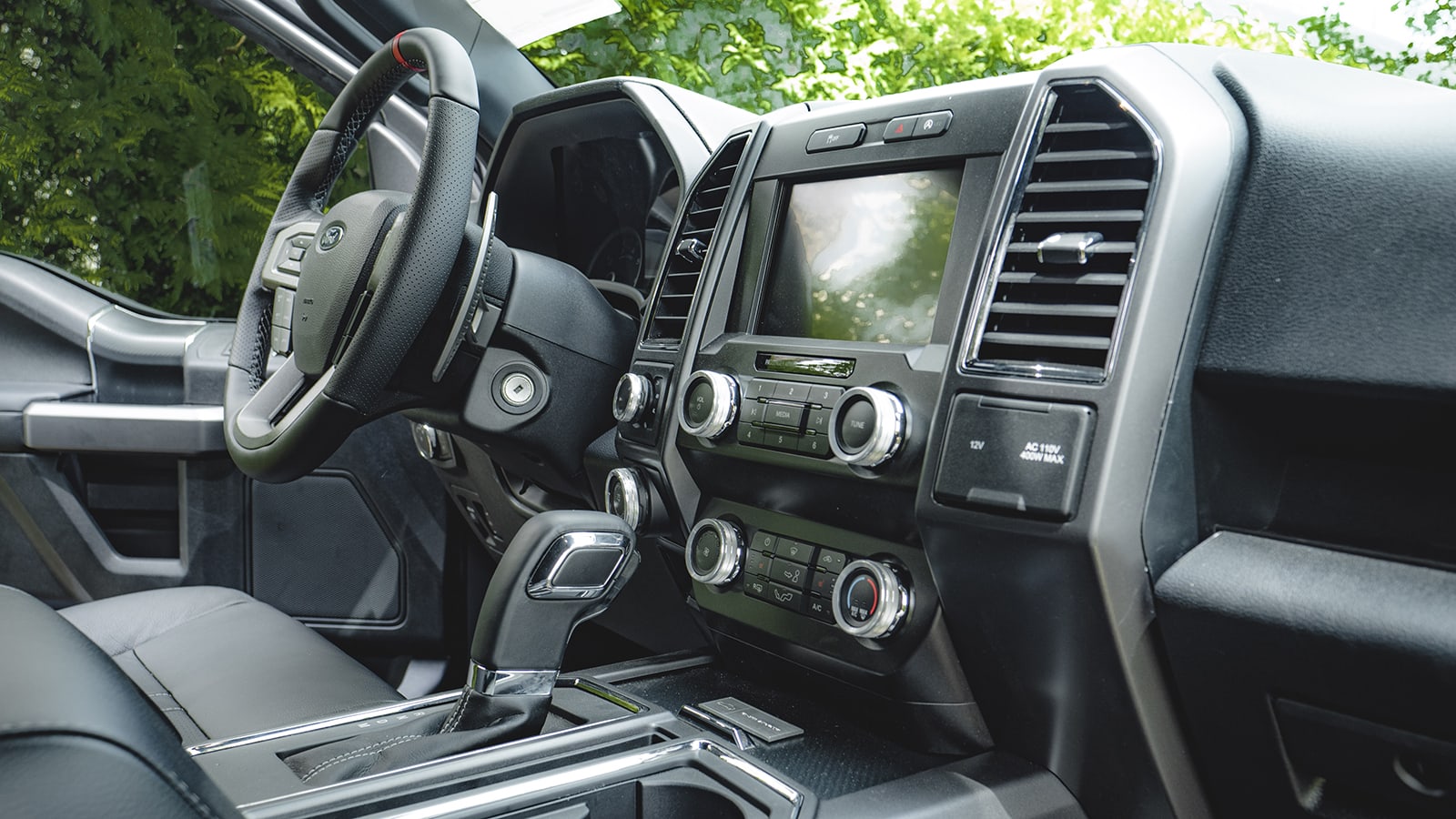 With the list of upgrades out of the way, we can finally talk about how these parts come together. Unfortunately, we didn’t have enough time to find a place to take the Mil-Spec off road, but we were able to spend plenty of time on pavement, which will still make up a big part of any owner’s driving experience. And speaking of “big,” that’s exactly what this truck is. It’s actually about seven inches wider than a Raptor, which itself is a couple inches wider than a regular F-150. And if you’re not used to driving around dually pickups, or Mil-Spec’s own Hummers for that matter, there will be an acclimatization period of watching your mirrors constantly to make sure you’re not about to nudge an unsuspecting Corolla into a wall. The truck is quite, tall, too, so you’ll want to think twice about pulling into covered parking areas or garages.

Other than the large size, the Mil-Spec F-150 is generally pretty easy to drive around and fairly civilized. Despite the off-road tires, steering is accurate and nicely weighted, and there’s even some feedback through the wheel. The tires don’t even generate much noise to the cabin, which is also relatively unaffected by wind and road noise. The off-road suspension is plenty comfortable as well, and possibly a bit softer than that of the Raptor. Body roll isn’t bad either. There are some clunking noises from the suspension going over bumps, but nothing disconcerting. Braking is fine, but some beefier brakes would be welcome, since it seems like it takes a fair bit of pedal pressure to haul this beast down. A company representative said there are plans for upgraded brakes.

While the Mil-Spec does make 500 horsepower, the truck doesn’t feel especially quick. It’s likely because of the effectively taller gear ratios from the tall tires and the weight of said tires. The Raptor steering wheel’s shifter paddles are fully functional, but being able to pick gears doesn’t make the experience feel any quicker. Arguably, it feels slower since the transmission is slow to change gears on demand. This is no fault of Mil-Spec’s though. Also, the V8 doesn’t make the same kind of low-down torque the Raptor’s turbo 3.5-liter V6 makes, so it feels like you have to work it harder to accelerate. The company has plans to offer the Ford Performance supercharger kit with the truck, and we think it would be a worthwhile choice if you have the scratch. But the engine does at least make all the V8 sounds you’d expect from a big truck. Prod the throttle and you get a loud, boomy, truck-like roar. Press it hard enough and you’d probably set off car alarms. Thankfully, it’s only loud when accelerating hard. When cruising down the highway or gently poking around town, the exhaust quiets right down to a muted burble. 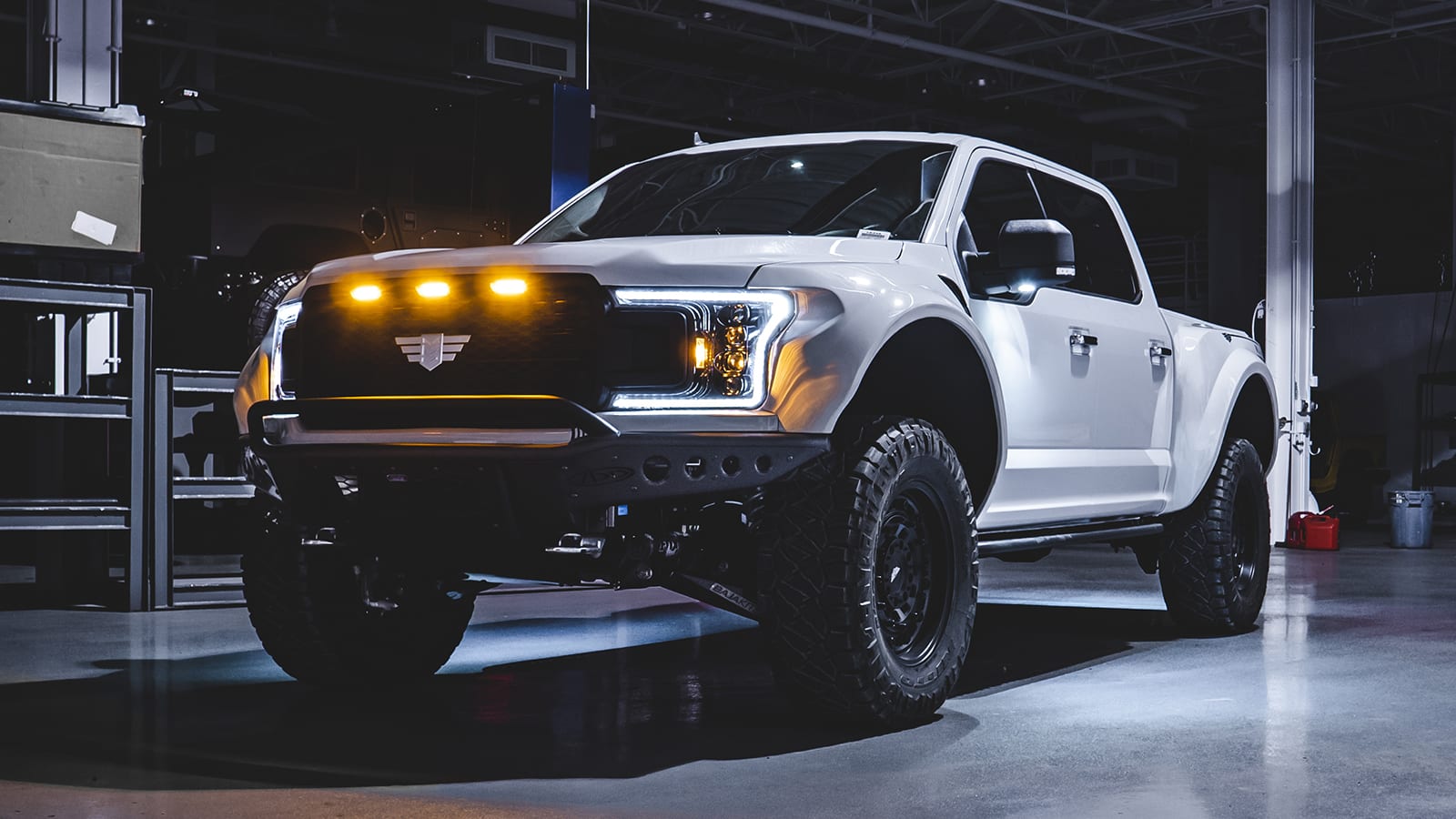 If all of this sounds interesting to you, you’ll also want to know pricing. The base price for the conversion is $34,950, plus the cost of the pickup truck that’s being converted. The cheapest you can get an F-150 XLT with a locking rear differential is $42,295, so the cheapest you could get into a Mil-Spec would be $77,245. Our test truck also had the $6,000 suspension package, and being a SuperCrew, would have added at least $6,500 to the cost of the base truck. That’s a big upcharge over the $55,150 of a factory Raptor, and it even tops the $71,690 of the Ram TRX. That makes the Mil-Spec a tough sell, considering both of those are a bit easier to handle on a daily basis, and the Raptor features more torque and the Ram is much more powerful with 702 horses.

But there are likely other factors at play in a buyer’s choice to get a Mil-Spec F-150. It could be a Ford loyalist who would love a Raptor, but desperately wants a V8 sounds and feel. Or it could be someone that’s looking for something even burlier than what the OEMs provide, while also being covered by a bit of a warranty – the Ford bits are all covered under the factory warranty, and Mil-Spec warranties any parts the company installs for 1 year/15,000 miles, with an extended 3-year/36,000-mile warranty available. For these niche cases, the Mil-Spec serves admirably.