The new kid on the block takes on grandpa

It's incredibly obvious which SUV is going to be most frequently compared with the 2021 Ford Bronco: the Jeep Wrangler. The two- and four-door body styles, the removable roof and doors, the comparable dimensions ... hell, even the marketing strategy. We've already compared their specs.

Yet, there is another bogey out there. A sage, old soul that's been around since the Pleistocene: the Toyota 4Runner, which has been priced and updated for 2021. Compared to the HomeTown Buffet of choice the Bronco provides, the 4Runner basically offers different toppings on the same delicious sandwich: four doors, one engine, one transmission, and the roof isn't going anywhere. Those different "toppings" provide escalating levels of capability in the form of TRD Off-Road and TRD Pro trim levels, plus the new 2021 4Runner Trail model.

Despite their vast differences and ages, though, the Bronco and 4Runner are bound to be considered by anyone looking to venture off the beaten path and bring a considerable amount of gear with them. Also, you know, people who want a really cool-looking off-road SUV.

Here's how they stack up on paper. 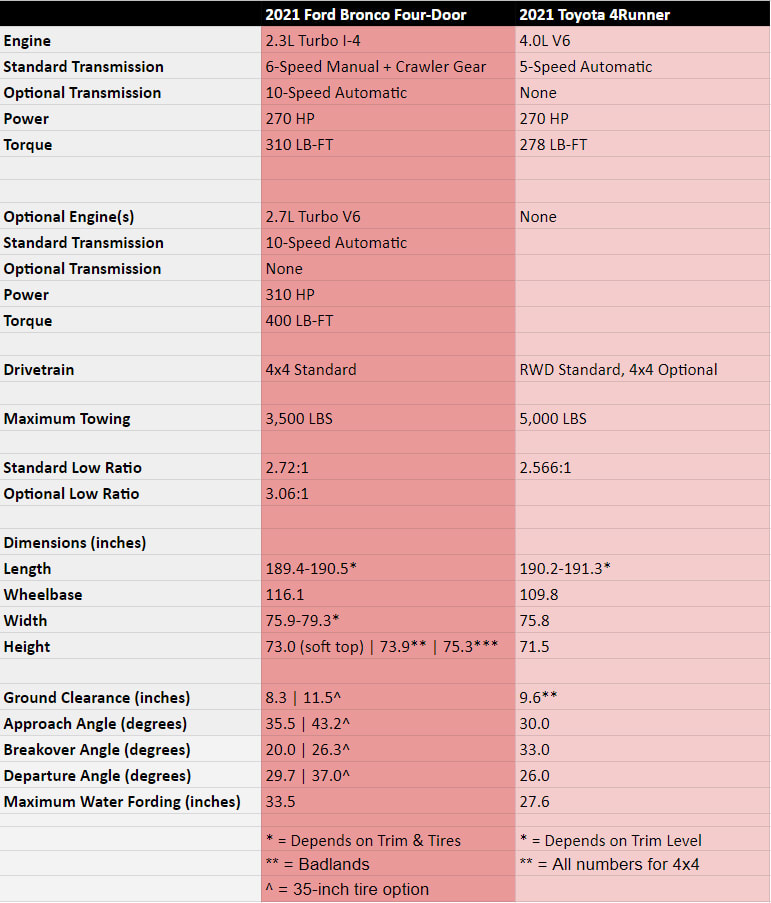 I won't bore you by reiterating what you've already digested in the chart, but here are a few things that stand out.

The 4Runner is just as long as the four-door Bronco, yet its wheelbase is a half-foot shorter. That certainly contributes to its considerable breakover angle advantage. It may also mean the Bronco will provide a better ride on the highway.

The Bronco has better approach and departure angles, but note the ground clearance. The Bronco's higher number is achieved with its 35-inch tire option. Without those, the 4Runner betters it.

Now, there are some key figures we don't know yet for the new Bronco. One is curb weight, so while the 4Runner and Bronco both have 270 horsepower standard, it's hard to know how much of a difference the Ford's turbocharged torque advantage will make. Because, for what it's worth, the 4Runner feels awfully slow with its old V6 and a curb weight of 4,750 pounds for the TRD models. Ye olde five-speed automatic sure doesn't help, either.

There's also a matter of not knowing interior dimensions. The 4Runner's cavernous cargo capacity and family friendly passenger room give it a significant advantage over the Wrangler, and given the comparable dimensions, we'd expect the same to be the case with Bronco vs 4Runner. But again, we don't know for sure yet.