Still more basic than its rivals, but with more features than before The 2020 Toyota Tacoma has a long-standing reputation for mechanical reliability and its continued presence in the marketplace has made it a force to be reckoned with. New entries in this expanding segment pose a threat to the Taco's dominance, though, as evidenced by its fourth-place finish in our 2019 midsize truck comparison test. In particular, its driving experience and interior are a bit too rugged, and borderline antiquated, compared to rivals trucks.

Still, the Tacoma remains versatile, practical and characterful. With two cab sizes and two bed lengths, enthusiast-friendly TRD models and even a manual transmission option, there’s a variant for just about any need and we can see why it's such a best-seller. Meanwhile, new safety and infotainment tech help round out an already compelling, though aging, package for 2020.

The Tacoma gets a facelift for 2020, including a new grille and taillights. The more substantive updates are inside where the 2020 Tacoma’s interior receives a new infotainment system with a larger touchscreen, Android Auto, Apple CarPlay and Amazon Alexa compatibility. Some of the updates, such as a new (and much-needed) power-adjustable driver’s seat and LED headlights, are limited to higher-end trims only. 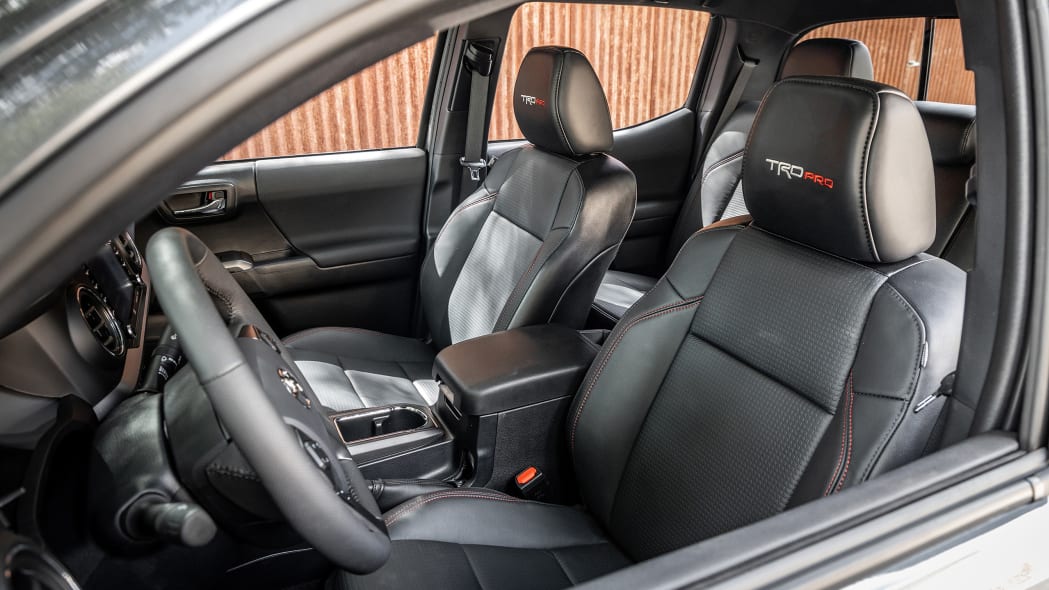 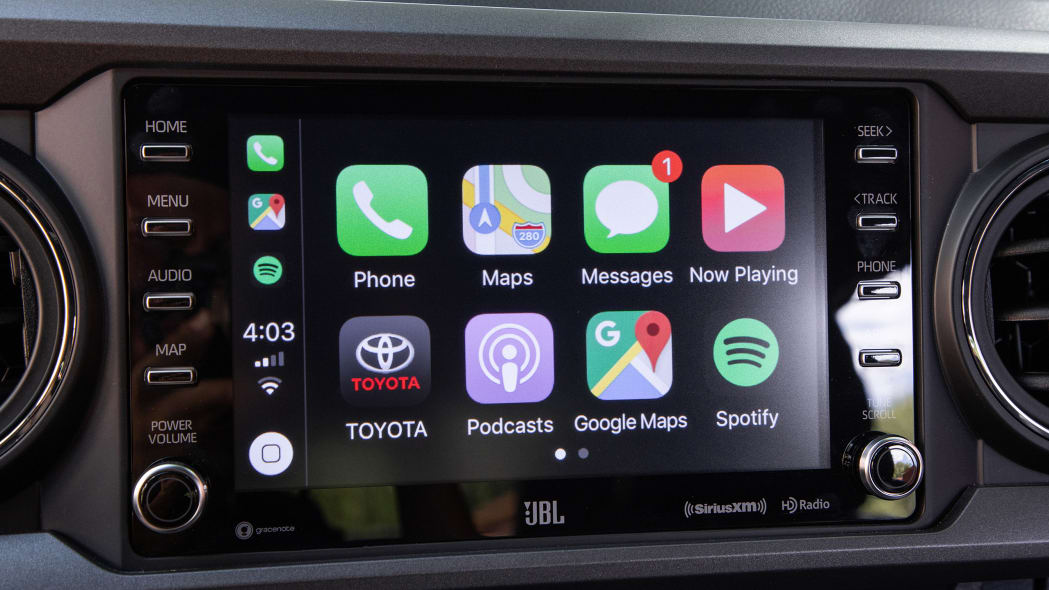 Midsize trucks are not known for being luxury cruisers, and the Tacoma, perhaps more than most in the segment, has a cabin that sticks to its functional, somewhat spartan roots.

While higher-trim Tacomas offer plenty of features, they’re packaged into an interior that leans hard into the truck's rugged, off-road focus. There are some soft-touch materials, everything is screwed together well and the newly available power-adjustable driver’s seat corrects the awkwardly low driving position that still remains in Tacoma trims without it, but it nevertheless has a back-to-basics feel. This is especially true when compared to its rivals from Ford, Jeep, Honda and Chevrolet.

This is perhaps most noticeable when you look at the steering wheel, which boasts large, unlabeled buttons reminiscent of an off-brand video game controller. This theme extends to other interior switchgear, all of which seems reasonably robust, but does not impress when it comes to material choices or design sophistication.

The new infotainment system is at least a welcome upgrade. Android Auto and Apple CarPlay are much-needed additions to the suite and they dress up an otherwise drab— but functional — multimedia interface. Toyota’s graphics remain pretty tired, but the functionality beneath them is better than ever. How big is the Tacoma?

The Tacoma follows the basic footprint of the midsize segment. Access Cab models are fitted with a 6-foot bed, but the Double Cabs can be paired to either a 5-footer or the 6-foot one that's known as the long bed. A pair of key rivals, the Ford Ranger SuperCrew and Jeep Gladiator, don't have a long-bed option. Both beds are just 41.5 inches wide at the wheel wells, so they won’t fit a 4’ x 6’ piece of plywood lying flat. The Tacoma's overall length is similar to that of its rivals.

Inside, you'll find unusually low-mounted seats. Specifically, the driver seat doesn't have standard height-adjustment and the resulting splayed legged seating position drew constant complaints during our midsize truck comparison. At least higher-trim models now get the "luxury" of a power-adjustable driver seat, but headroom and visibility in the short cab can still be an issue.

Tacoma Access Cab model doesn't realistically offer enough space in the back seat for adults to travel in any semblance of comfort (and you really shouldn't put children back there, either). However, that's typical for the segment. The real point of comparison, then, is the Double Cab. Though it adds a whopping 8 inches of legroom compared to the Access Cab, its considerably less spacious and comfortable back there than the Ranger, Gladiator, Colorado/Canyon twins and the Honda Ridgeline. If you're looking for the most family friendly midsize truck, this isn't it. 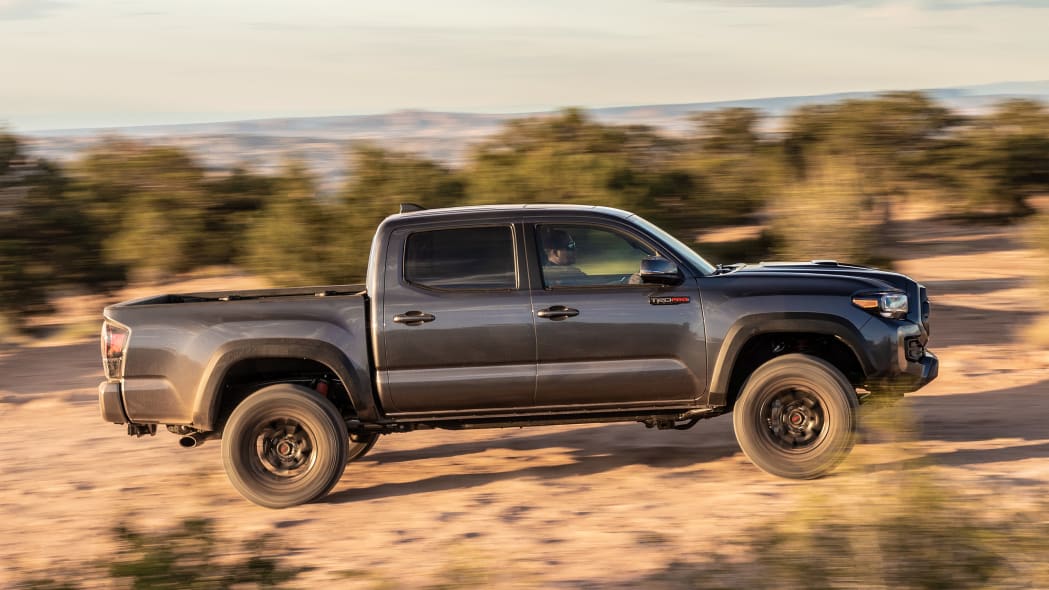 What are the Tacoma's performance, fuel economy, towing and payload?

Toyota offers two engines in the Tacoma. The base engine is a 2.7-liter inline-four producing 159 horsepower and 180 pound-feet of torque. While torquey, it is outshined by GM’s 200-horsepower 2.5-liter unit – other competitors don't offer such a low-power base four-cylinder. Fuel economy estimates are unremarkable at 20 mpg city, 23 mpg highway and 21 mpg combined with rear-wheel drive (4x2) and 19/22/20 with four-wheel drive (4x4). A six-speed automatic is standard.

The upgrade is a 3.5L V6 that makes a much healthier 278 hp and 265 lb-ft of torque. The six is also one of the weaker offerings in the segment, but not by much. Despite the wide gap in power, there’s not much difference in fuel economy between the upgrade V6 and base inline-four. When equipped with the standard six-speed automatic, the V6 returns 19/24/21 with 4x2 and 18/22/20 with 4x4. The TRD Off Road and TRD Pro can be equipped with an optional six-speed manual that returns 17/20/18.

In its most towing-friendly configuration (V6, 4x2, Towing Prep package), the Tacoma maxes out at 6,800 pounds of trailering. Its GM, Ford and Jeep competition typically offers 7,500 pounds or more, but the Nissan Frontier and Honda Ridgeline do lag the Tacoma at 6,500 and 5,000 pounds, respectively.

Maximum payload capacity is achieved with the four-cylinder 4x2, which can haul 1,620 pounds, and with this, it compares more favorably to the segment. The popular configuration of Double Cab V6 4x4 with an automatic can haul 1,175 pounds with the regular bed and 1,120 with the long bed. Going with the 4x2 adds a couple hundred pounds of capacity. 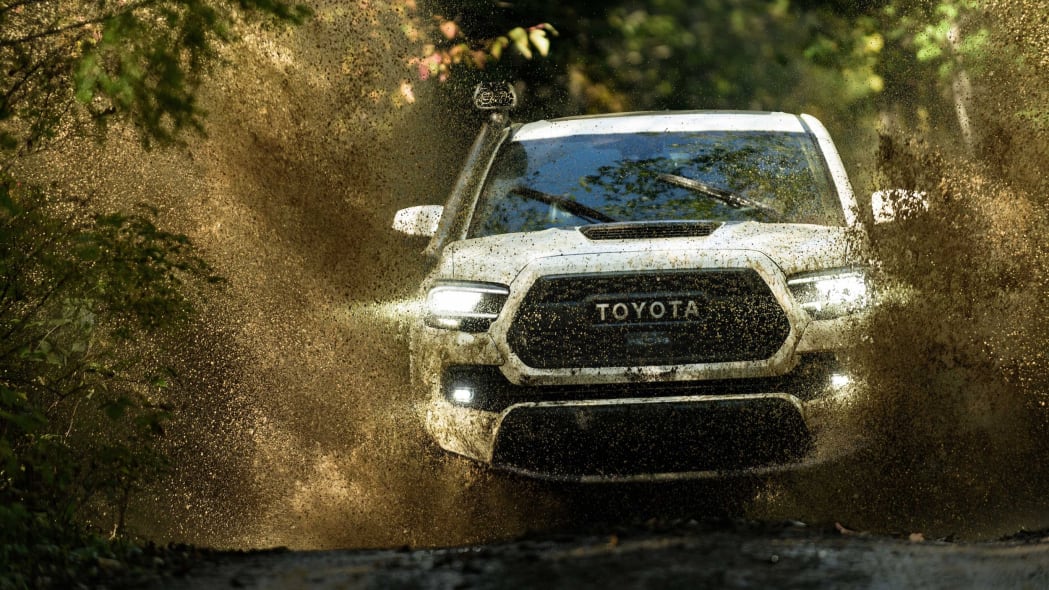 The Tacoma is comfortable enough on the open road, and with the V6, has adequate acceleration for highway merges and passing. However, that engine is noisier and courser than those of rival trucks and the six-speed automatic tends to hunt for gears (and has fewer gears from which to choose than rivals have). The manual six-speed gearbox available on V6 models is pleasant as truck transmissions go, but doesn’t do much to make the experience more engaging.

TRD Off-Road and TRD Pro models can be a bit bouncy and harsh on poor surfaces due to their beefed-up suspensions, but they’re tolerable on iffy roads for enthusiasts who want the extra go-anywhere capability. And go anywhere they most certainly can. Both come with terrain-specific drive modes, an electronic locking rear differential, and heavy-duty drivetrain cooling. Automatic models even get an auxiliary transmission cooler. All 4x4 models get a two-speed transfer case, TRD or otherwise.

In general, the Tacoma is just more rugged and truck-like than its competitors. Off-road, that's a good thing, and many are bound to find this ruggedness adds character. However, from its ride quality and handling precision, to its interior space and comfort, the Tacoma just isn't as livable or pleasant to drive as a Ford Ranger, Chevrolet Colorado or Jeep Gladiator. That's a key reason it came in last in our midsize truck comparison (see below).

Where can I read more about the Toyota Tacoma?

We test the Tacoma against the midsize pickup segment newcomers. 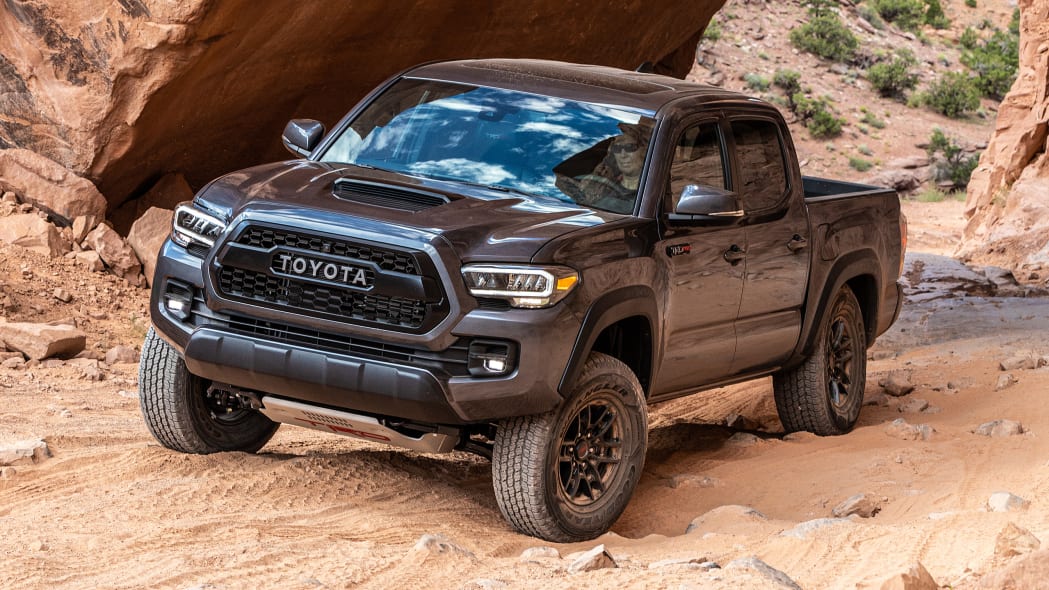 Toyota offers the Tacoma in increasingly rugged off-road variants. What are they like to live with? 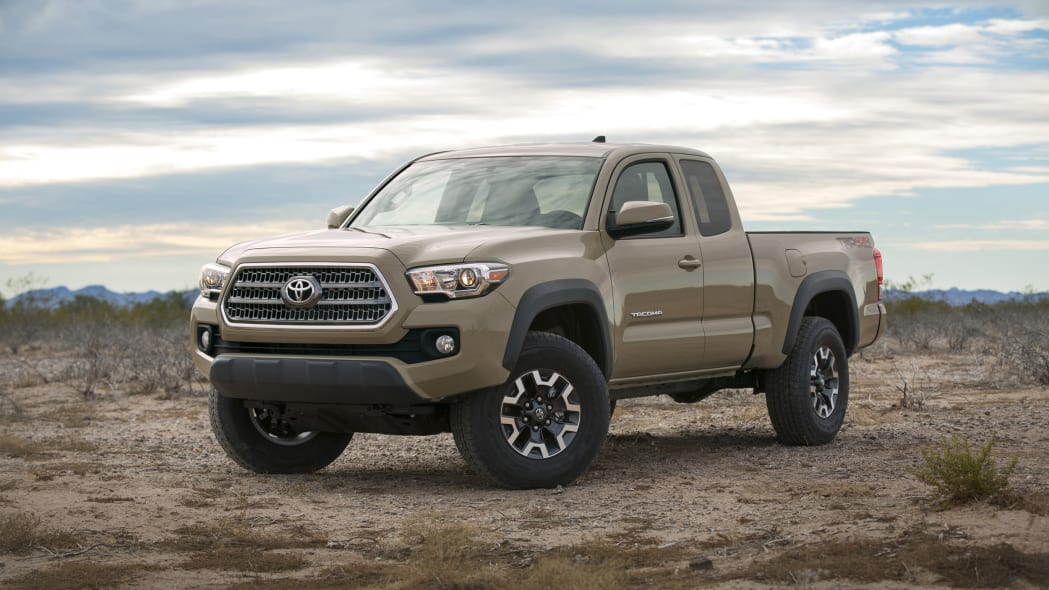 Speccing out a pickup truck can be tricky, to say the least. Even the Tacoma, which is available in relatively few configurations compared to some full-size offerings, comes in 32 different variants before you even start adding options.

There are simply too many permutations to list them all here, but suffice it to say that with the exception of the TRD Pro and Limited models, you can build your Tacoma pretty much the way you want. The shorter Access Cab is available only with the long bed; Double Cabs can be optioned with either. The Limited and TRD Pro are available only in Double Cab configurations, and the TRD Pro can only be had with four-wheel drive. TRD Sport and TRD Off Road models are available in 4x2 “Prerunner” style if that’s your thing.

Here's the basic model lineup and pricing for the 2020 Tacoma, but you can find a full breakdown of these trims levels' features, specs and local pricing here on Autoblog.

What safety equipment does the Tacoma have and what are the crash test ratings?

Rear cross-traffic alert, blind spot monitoring, and parking sensors can all be added with packages available on the SR5, TRD Sport and TRD Off-Road models. Higher trims get them bundled in.

Models that have been crash tested by the government received a four-star overall rating with a four-star frontal rating and five-star side rating. The Insurance Institute for Highway Safety gave a Top Safety Pick nod to the 2020 Double Cab model, which is highly unusual for pickups. The Access Cab didn't take home an award, but did turn in the best-possible crash ratings and crash-prevention tech scores. 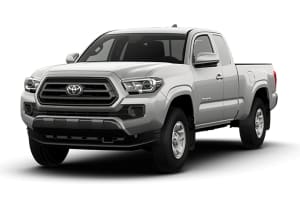