After a year with this midsize pickup, some of us wish we owned one

View All Specs
Nothing else we do here at Autoblog is quite like our longterm reviews. That's why we always try to keep a few vehicles in our longterm garage at any one time. These vehicles stay with us for anywhere from 12 weeks to 12 months and become our workhorses, shuttling and moving people, pets, groceries, gardening supplies, sports equipment, furniture and just about anything else you can imagine. We get to use, drive and maintain them like an actual owner would, giving us a good look at things we may not pick up on in some of our other reviews. Few, if any, of our longtermers have been as versatile as our recently-departed 2018 Honda Ridgeline RTL-E. In fact, we were so in love with the truck that we twice asked Honda to extend the loan.

The second-gen Honda Ridgeline debuted in 2017. It's still an oddball (a unibody truck based on the Honda Pilot and Passport with features like a trunk and a tailgate that articulates in two places) in a field of traditionalists like the Toyota Tacoma, Chevy Colorado and Ford Ranger, but that's what's so compelling about it. It's not trying to be like those other trucks. For better or worse, it's an alternative take on a conservative segment. For many people, it's the truck you actually need, not the one you want, even if that means it's occasionally a bit boring. Read our thoughts below. It's not perfect and it's not cool, but know that one of us on staff enjoyed the truck so much that he's looked at purchasing one for his family.

So, to our Ridgeline, so long and farewell.

Editor-in-Chief Greg Migliore: The Ridgeline is one of the more well-rounded vehicles we've ever had in the Autoblog longterm fleet. I enjoyed my time in this understated yet capable pickup. I hauled mulch, ran errands, moved a recliner and did a hunting trip to the Upper Peninsula in the Ridgeline. I was never sad to sign it out. It was a nice blend of comfort and confidence.

Yes, the Colorado, Tacoma, Gladiator and Ranger have more presence, but it's hard to deny the simple, effortless way the Ridgeline gets the job done. The engine is strong, and the fuel economy is decent. The cabin is laid out nicely. It's just an all-around solid truck. There are more macho pickups, but this is a great option for buyers who want an everyday driver and need some grunt on the weekends.

Senior Editor, Green, John Beltz Snyder: I found the Ridgeline wonderfully straddles the line between capable and practical. Capable, because I was able to cram it full of people, luggage and furniture, and at the same time it's also great in the snow and was happy to pull an Airstream Basecamp X all over Northern Michigan. Practical, because it was much easier to drive and park and is more efficient than the brutish full-size pickups.

Now, this didn't bother me any with this particular truck, but I'd talk to the occasional Ridgeline owner in parking lots out in the wild. I'd ask how they liked the truck, and of course they'd gush about all the same reasons I listed above for liking it. More than once, though — and it was always the man, if I was talking to a couple or family — after the long list of virtues, I'd get a little aside when they were out of earshot of their significant others. In hushed tones and tight body language, they'd give the but-I-wish-it-was-more-manly sort of caveat. I think that speaks as much to the typical American male insecurity (and by pointing it out, I'm in no way professing myself to be above it), as to some unsuccessfully executed design.

I'm not much of a truck guy, but I fell in love with the Ridgeline. Even if I don't want a pickup, the Ridgeline has me considering its platform-mates, the Honda Passport, Pilot and Odyssey, for replacing my wife's small crossover as potential haulers of my own family. I'm still, however, trying to steer her toward something with a plug. Road Test Editor Reese Counts: Like everyone else, I'm going to miss the Ridgeline. It is the perfect truck for me. I'm not really into offroading, I don't have a boat or car to tow, rarely haul anything larger than some mulch or a pair of bicycles, and I don't need more space in the backseat. It's just me, my wife and two dogs. I don't really care that it's a bit milquetoast. So are most other trucks short of a Colorado ZR2, Toyota Tacoma TRD Pro or Ford F-150 Raptor, and the Ridgeline is more comfortable than any of those. Since it's pretty much a Pilot or Passport from the second-row forward, it's got a better interior, too.

I've seriously looked into replacing my wife's CR-V with a Ridgeline. I'm just waiting for a mid-cycle refresh to fix the garbage infotainment system.

Associate Editor Joel Stocksdale: The Honda Ridgeline has a heck of a lot going for it. I love its engine, it has all kinds of clever storage options, and it's super comfortable. It's absolutely the truck that people who think they need a truck should get. It gives you that outdoor storage versatility while still being comfortable and refined.

But for all its cleverness, I never fell in love with it, and I think it's because nothing, except occasionally the engine, got my heart racing. It pretty much looks like a Pilot with the back roof chopped off, meaning it's only a little more interesting-looking than that minivan-esque crossover. It could really use a dash of the Passport's style. Inside, the Ridgeline prioritizes ergonomics over design, which is fine, but not fun. And the ergonomics were undermined by the awful fully-touch-sensitive infotainment system that's slowly being phased out across the Honda line.

The driving experience was clearly aimed at being serene and comfortable, too, with super soft suspension and a slushy automatic. That's fine, but it doesn't necessarily make you want to rush down to the garage to take it on a trip. It also lacks the off-road capability of more traditional trucks, so it doesn't have that fall back on.

Keep in mind, though, these are the gripes of a car enthusiast. For the average person, the Ridgeline is a fantastic vehicle that's extremely practical and comfortable. I just wish it had a little more to offer less practical people. Assistant Editor, Zac Palmer: I definitely fall on the "love it" side of our longterm Honda Ridgeline, and am sad to see it go. It's the pickup truck for somebody who doesn't really want a truck, but appreciates the capability it provides on occasion.

Its novel swinging tailgate proved undeniably useful, and every other truck maker needs to figure out how to integrate the underbed storage trunk. I used it on many occasions, and it's way better than dealing with your stuff sliding all around in the back seat/floor area.

Road trips were a cinch due to how comfortable it is on the highway. Where other trucks might ask more of you, the Ridgeline is a relaxing road companion that makes the miles melt away. Those aren't words I thought I'd ever write about a truck, but it's undeniably true in this one.

My annoyances were similar to those of others. Its dated infotainment system combined with the lack of a volume knob in favor of a touch capacitive slider never failed to irritate. Then there's the looks problem. I don't necessarily care for the front end, and neither do hardcore truck folks. Honda needs to come up with a bold design for the next Ridgeline, but keep the same drive character. It might actually bring in a lot of people who think it looks too much like a car.

But a test drive might just make you fall in love with it enough to turn it into your next daily driver. 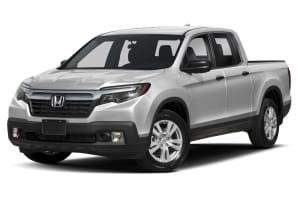