In many ways, the 2020 Jeep Gladiator is the long-awaited and deeply desirable Wrangler pickup that Jeep fans and truck fans alike have been clamoring for. It has the iconic Wrangler look, the same interior, and fully removable roof panels and doors. And yep, the windshield even folds down, too. However, the Gladiator has a unique frame that's a whopping 31 inches longer than a Wrangler Unlimited, while the wheelbase is 19.4 inches longer. Basically, it's a whole different truck under all that Wranglerness, with an emphasis on "truck": It has the best towing capacity among midsize pickups and a 1,600-pound payload, along with a 5-foot bed. Oh, and how can we forget its off-roading potential?

So, whether you're looking for that long-sought Wrangler with a pickup bed, or just a capable and unique midsize truck, the 2020 Gladiator should definitely deliver.

The Gladiator is an all-new model.

The Gladiator shares much of its interior with the Wrangler, which is a very good (and cool) thing. You get the same characterful and, in upper trims, colorful design constructed of materials that should seem almost shockingly opulent for hardcore Wrangler faithful. Jeep's serviceable 5-inch touchscreen is standard, but you can upgrade to either a 7- or 8.4-inch unit that improve functionality considerably (in part since they include Apple CarPlay and Android Auto). The fact that you sit rather close to the dash in the Gladiator means those big screens seem even bigger.

Like the Wrangler, the Gladiator is offered with either multi-panel soft- or hardtop roof designs. The soft top in particular is notable for allowing you to remove its rear panel while leaving the roof panel in place. This allows for free-flowing air without the sunburn. And, if free-flowing air is really your thing, the doors are removable and the windshield can be lowered after the removal of a few bolts.

The bed is only available in a 5-foot length and includes tie-down points and a power outlet.

How big is Gladiator?

The Gladiator is considerably longer than the Wrangler, but let's stick to comparisons with other midsize trucks. As it's only available with what effectively is a crew cab and short bed design, every Gladiator has the same length of 218 inches. That's 8 inches longer than the Ford Ranger, but about 7 inches shorter than the long-bed versions of the Chevy Colorado and Toyota Tacoma. It's a bit narrower than those as well. Basically, the Gladiator is in the heart of the midsize pickup segment.

The interior is a different story, where there's ample space for four adults to sit comfortably. At 38.3 inches, there are a couple more inches of rear-seat legroom in the Gladiator than in any of its competitors. We had no trouble putting one 6-footer in the rear seat behind another similarly tall person in a comfortable driving position. Front and rear headroom are also class-leading.

Like the Wrangler, the 2020 Jeep Gladiator comes standard with FCA's 3.6-liter V6 that produces 285 horsepower and 260 pound-feet of torque. A six-speed manual is standard, and an eight-speed automatic optional. EPA-estimated fuel economy is 17 mpg city, 22 mpg highway and 19 mpg combined with the automatic, and 16/23/19 with the manual. That's 3 mpg worse than the turbocharged Ford Ranger.

Unlike the Wrangler, however, the Gladiator does not offer Jeep's own turbocharged engine option. A 3.0-liter diesel V6 has been promised by Jeep, but hasn't yet shown up in dealerships.

How much can Gladiator tow and haul?

We towed a 5,500-pound Airstream trailer for several miles using a Gladiator Sport equipped with an automatic transmission and all the requisite towing gear, including a Mopar-branded trailer brake controller. Buyers who plan on regularly hauling anything that heavy will likely want to opt for a fullsize pickup, but we can confirm that the Gladiator will handle the load just as well as any of its midsize competitors. The engine feels a little stressed as it pushes the Gladiator and trailer up to highway speed, but its transmission holds gears well with no intervention from the driver, and appropriately adapts to uphill and downhill grades.

Its payload capacity of between 1,105 and 1,600 pounds is similarly in the ballpark for the segment, though it should be noted that only the Ranger (1,860 pounds) outdoes its max payload. 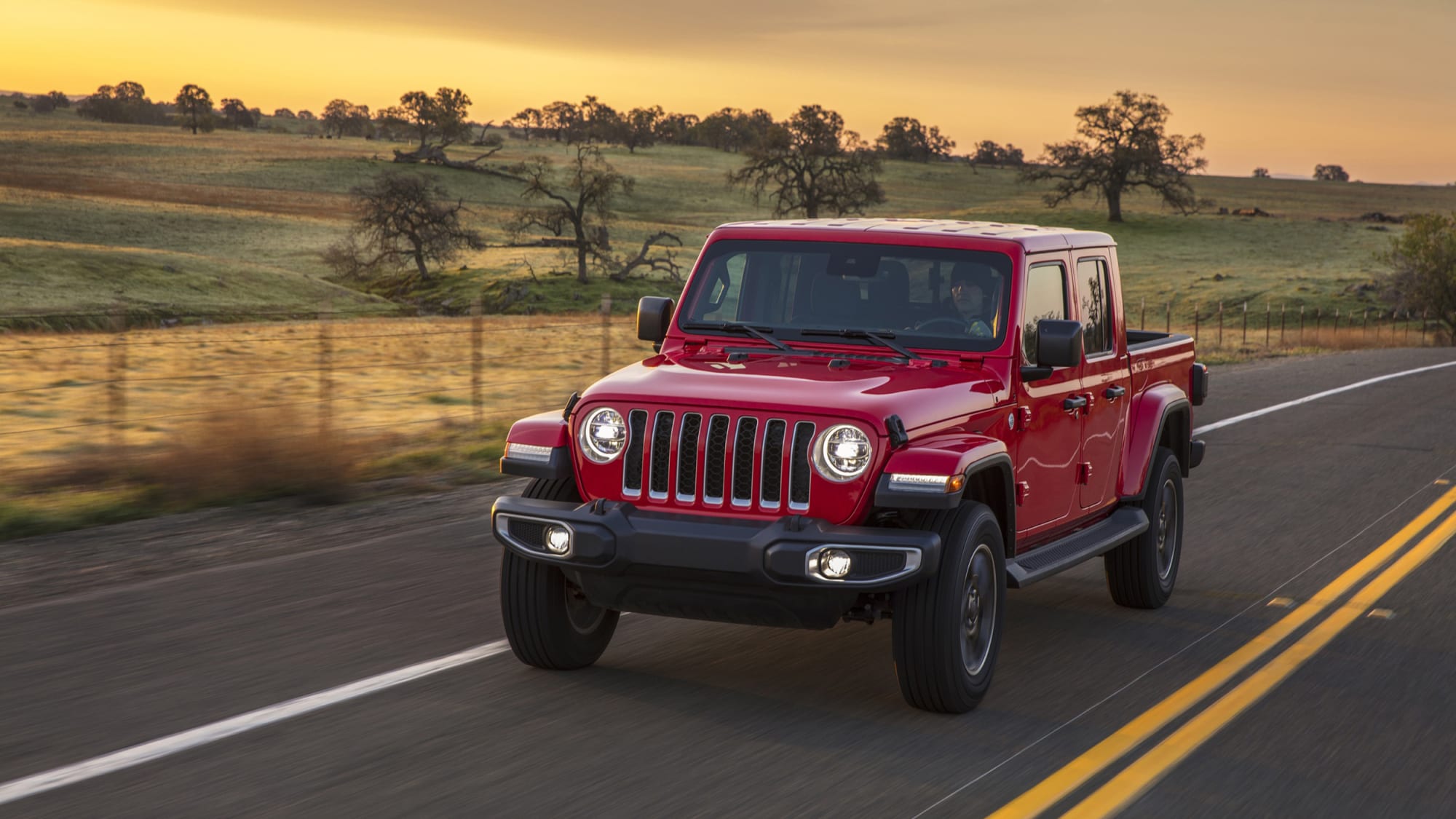 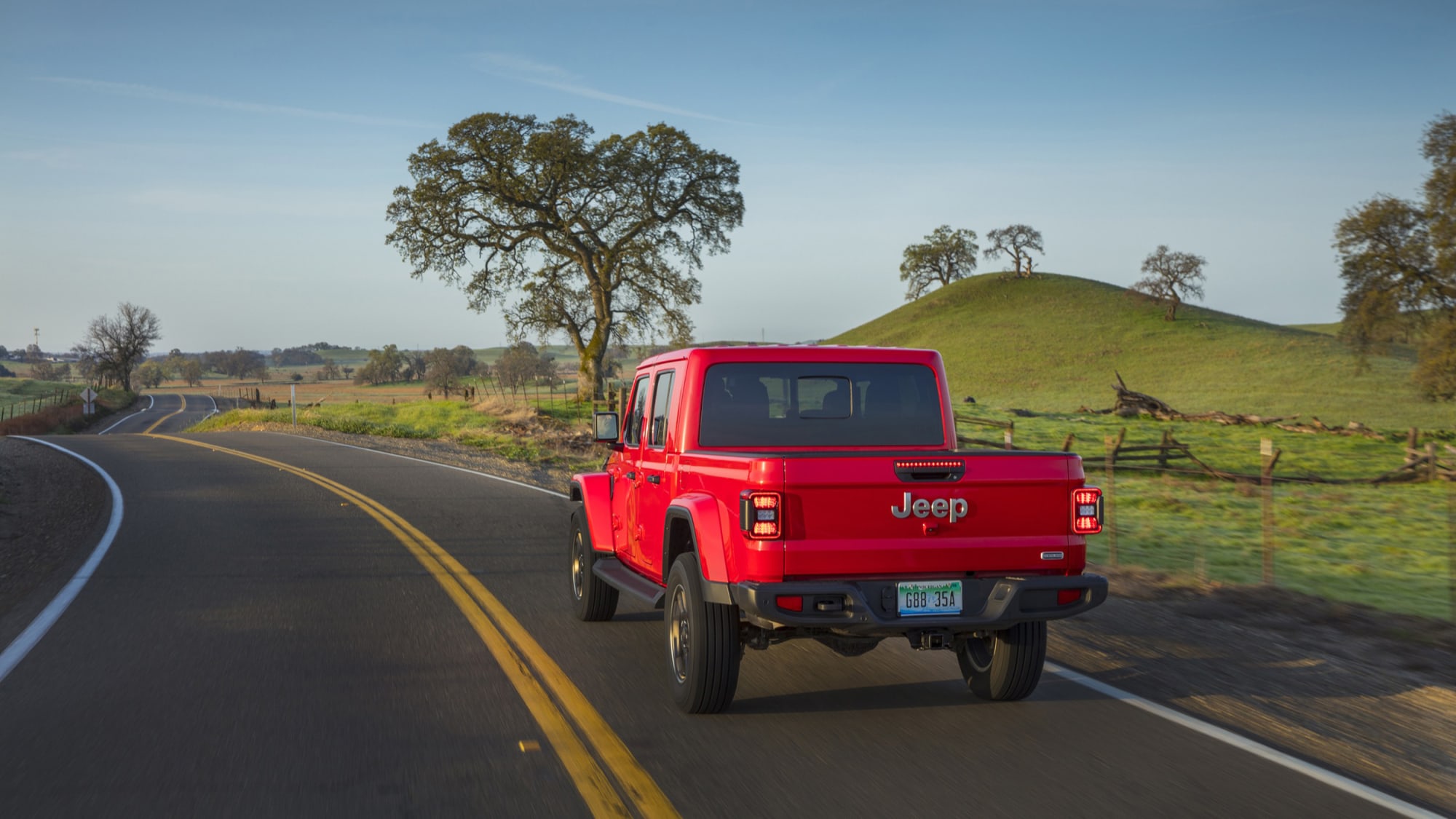 The Gladiator drives a lot like the Wrangler Unlimited. No surprise there. The ride is a bit less busy due to the truck's much longer wheelbase and additional weight, and it would likely further improve with some weight in the bed. Base Sport models get 17-inch wheels shod in 245/75 tires, and so equipped, the Gladiator's power steering feels very light and overboosted, requiring a lot of small corrections to keep the truck pointed straight ahead at highway speeds. In Rubicon trim, the Gladiator gets 33-inch all-terrain tires with soft sidewalls, with blockier mud-terrain tires optional. It sounds strange, but those heavier tires dampen some of the lightness from the steering, and that offers a driving experience that we prefer over the base model. Jeep representatives told us that a large percentage of Sport buyers will accessorize their Gladiators with new wheels and tires directly after taking delivery, so tuning the steering for off-road-spec tires makes sense.

In regular driving on surface streets and highways, the Gladiator's V6 engine feels sufficient. There isn't a whole lot of joy in the art of shifting the Gladiator's manual gearbox, but somehow a clutch pedal in a Wrangler-based vehicle just feels right. In reality, though, nearly everyone is going to opt for the eight-speed automatic. It's a good transmission that doesn't unnecessarily hunt for gears and mostly disappears into the background, pairing well with the V6. 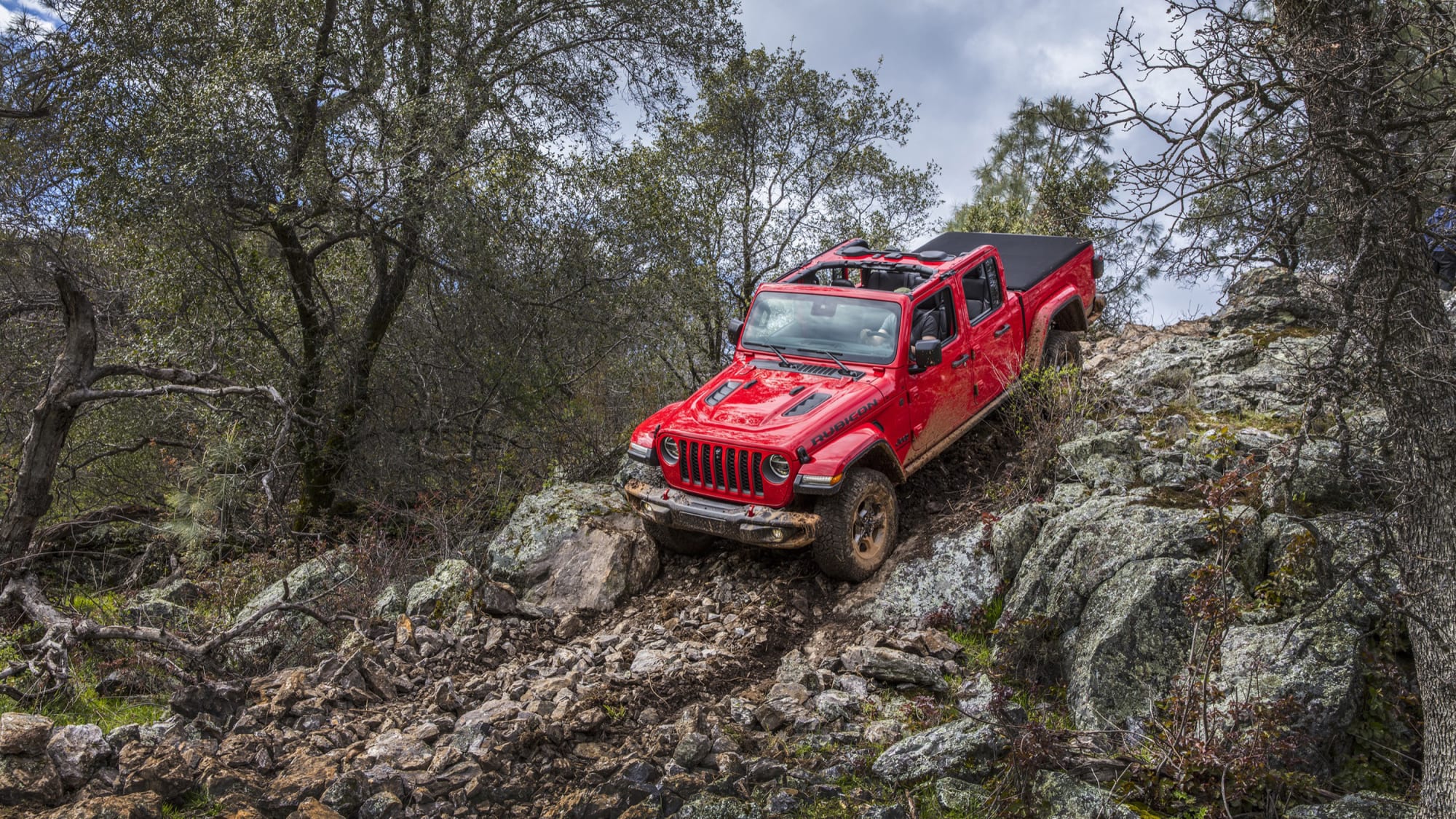 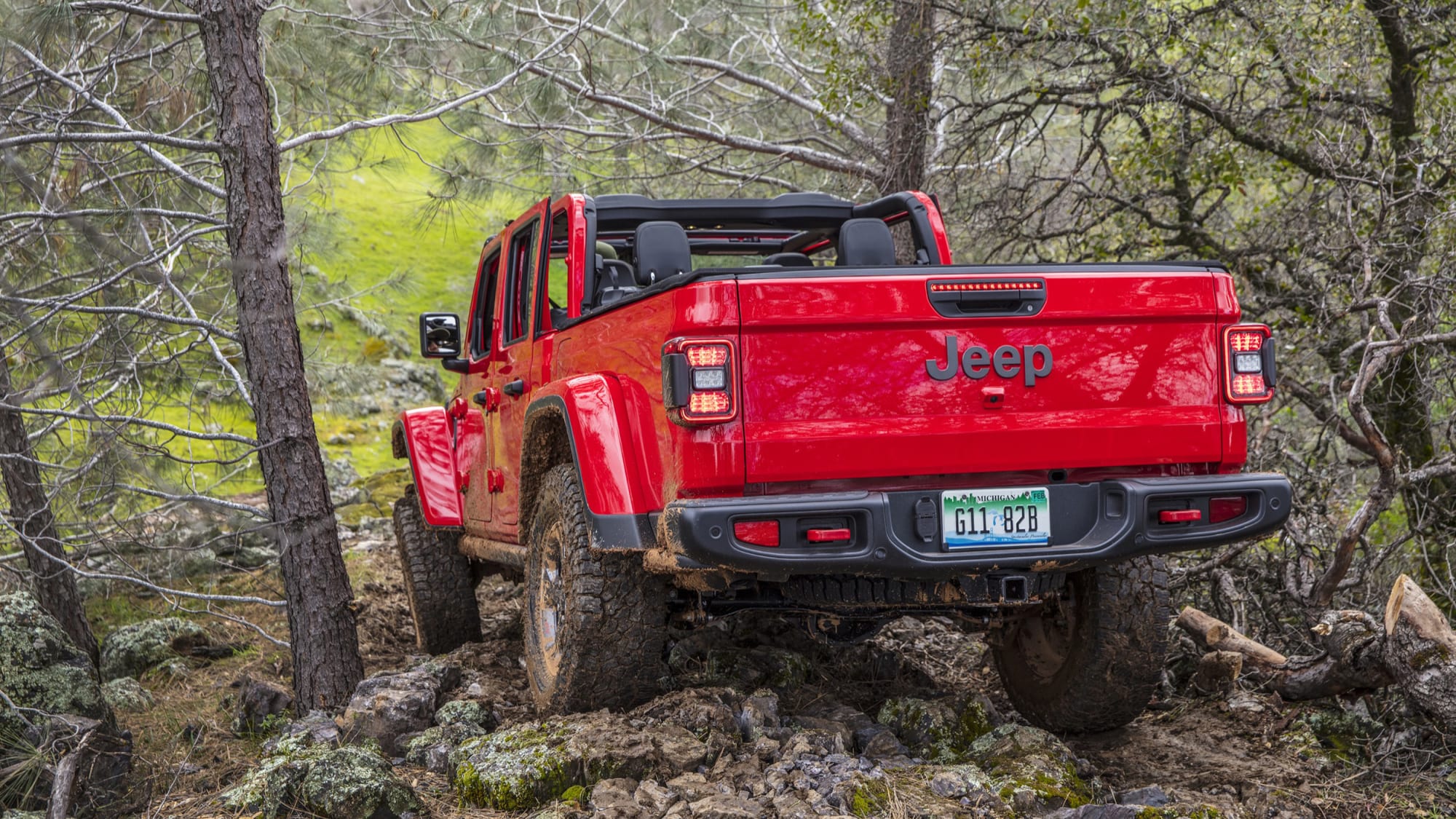 How does Gladiator perform offroad?

The Gladiator's approach angle of 43.4 degrees, departure angle of 26 degrees, and 11.1 inches of ground clearance are all class-leading figures. It's also capable of fording water to a depth of 30 inches. If there's a limitation, it's the Gladiator Rubicon's 20.3-degree breakover angle, a result of the long wheelbase and super short front overhang that's made possible by the front wheels being pushed as far forward as possible. A Toyota Tacoma TRD Pro has a breakover angle of 26 degrees, and the Chevy Colorado ZR2's breakover is also better at 23.5 degrees. Hardcore offroaders will definitely be thankful for the Rubicon's heavy-duty steel rock rails, which protect the lower bodywork from dents, dings, and scratches when scrambling over large obstacles, and disconnecting swaybars that allow for greater axle articulation.

Four-wheel drive comes standard, with Sport and Overland models getting an on-demand system called Command Trac. Gladiator Rubicon models get an upgraded Rock-Trac system that includes electronic locking differentials and sway bar disconnect. Heavy duty Dana 44 solid axles front and rear are standard across the board. With a manual transmission, the Rubicon boasts a super low 84.2:1 crawl ratio (77.2:1 with the automatic), meaning the driver can precisely modulate forward momentum using the gas pedal, easily inching across uneven terrain at a walking pace.

Jeep announced another version of the Gladiator called the Mojave several months after other versions hit the market. The Jeep Gladiator Mojave is fitted with an upgraded suspension system that features high-tech Fox shocks designed for high-speed desert running. Buyers who want the ultimate off-road Gladiator can now choose either the rock-crawling Rubicon model or the Baja-style Mojave.

What more can I read about the Jeep Gladiator?

Our first driving impressions of the Gladiator, both on- and offroad, including details about its design, capability and how it's different from the Wrangler. 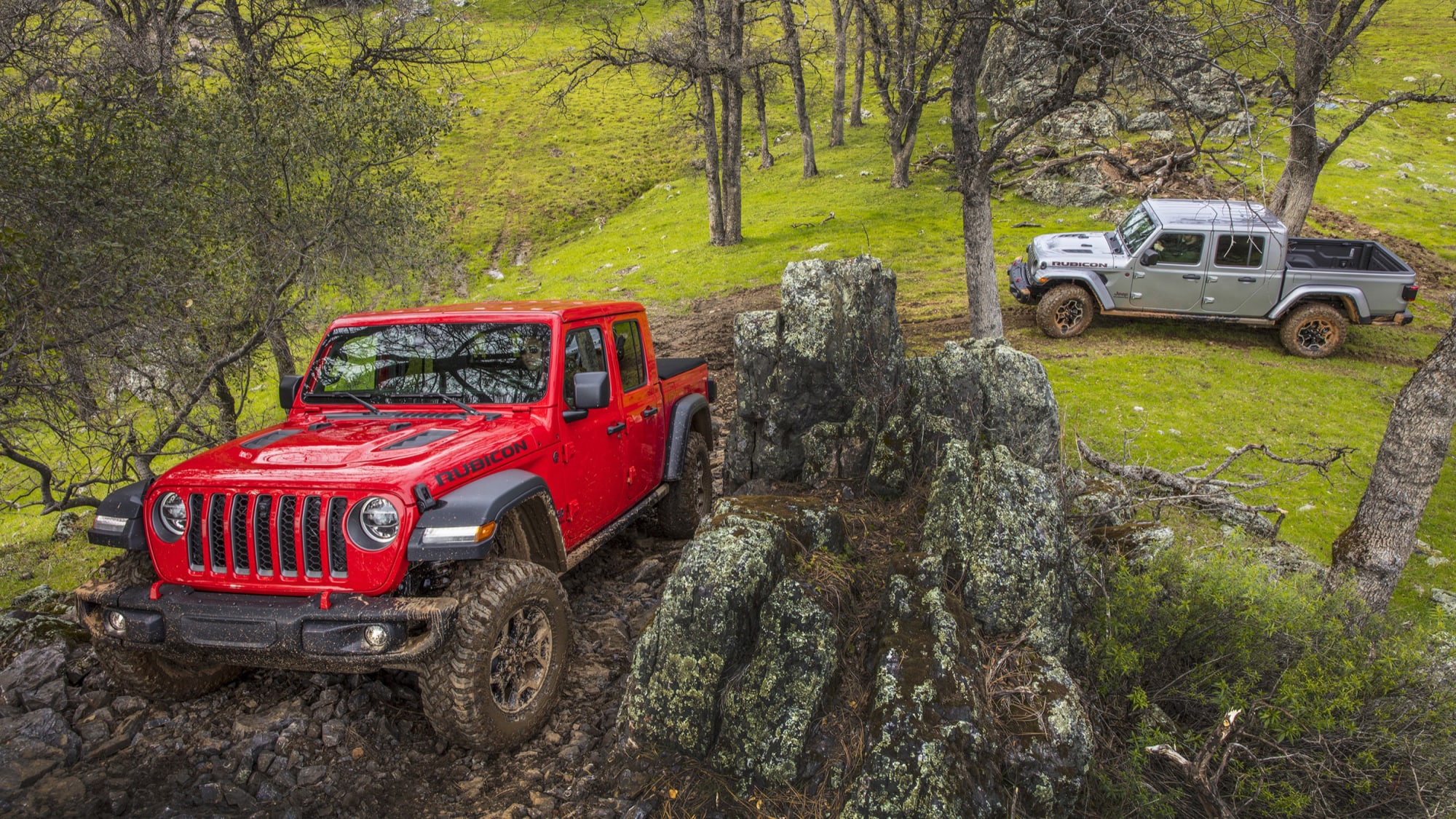 2020 Jeep Gladiator vs. Ford Ranger and other midsize trucks

We compare engine specs and dimensions of the Gladiator versus the midsize truck field, which also includes the Toyota Tacoma, Chevrolet Colorado and Nissan Frontier. 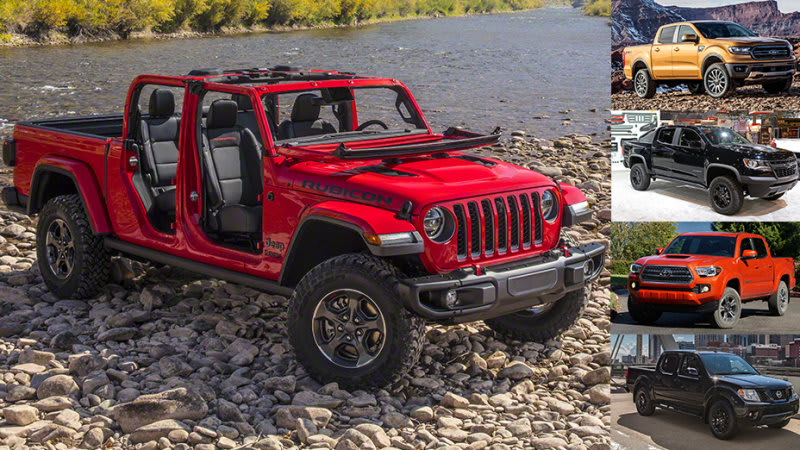 Our first drive of the Mojave edition, where we compare the high-speed desert runner's capabilities with the rock-crawling Rubicon edition. 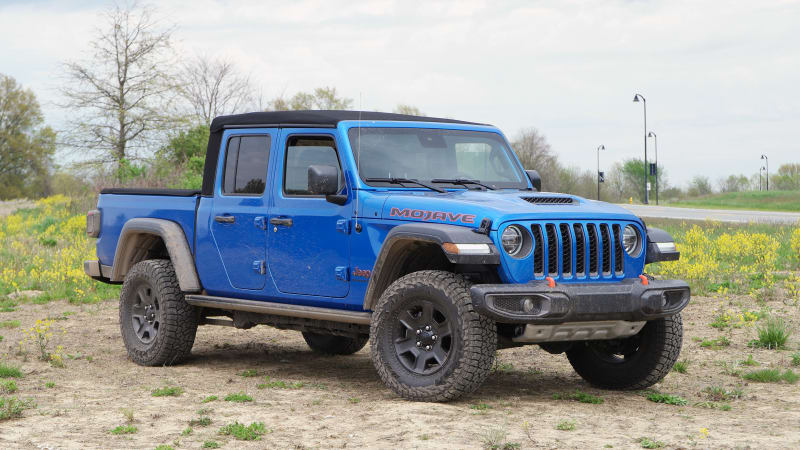 Engineer Dan Edmunds tests the Gladiator Mojave against the Gladiator Rubicon in a battle to see how much difference in articulation there is between a locked and an unlocked sway bar. 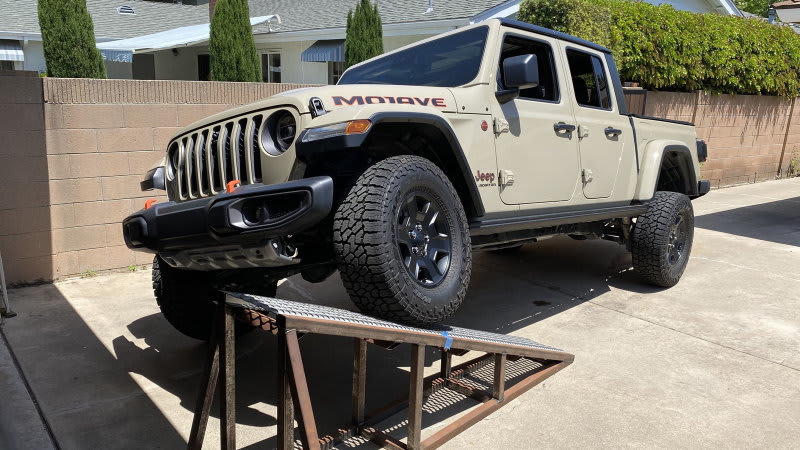 We explain and show you how to remove the Gladiator's top and doors using nothing but the tool kit that's supplied with the vehicle. 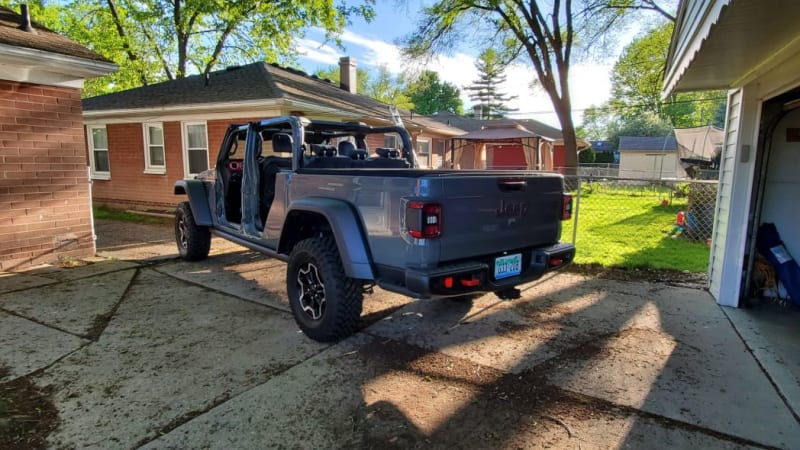 What features are available and what's the Gladiator's price?

Pricing for the base Gladiator Sport starts at $35,040 including a hefty $1,495 destination charge. A bump up the ladder to Sport S trim brings power windows and door locks, keyless entry, a 7-inch touchscreen, and a 115-volt power outlet in the truck bed for $38,250. The luxurious Overland trim level gets unique 18-inch wheels, side steps, body-color fender flares, an 8.4-inch Uconnect screen, and access to a host of options including a leather interior and adaptive cruise control for $41,890. At the top of the lineup sit the Rubicon and Mojave for $45,040. Jeep says a fully loaded Gladiator Rubicon with everything the factory can throw at it will cost right around $60,000.

Every 2020 Jeep Gladiator comes standard with front and front-side airbags, but unlike its competitors, there are no side curtain airbags. Stability control and a rearview camera are included. There are a number of features available on every trim level. The Active Safety Group adds a blind-spot warning system and rear parking sensors. The Advanced Safety Group adds forward collision warning and adaptive cruise control.

The Gladiator has yet to be crash tested by a third party.

How does it stack up to the competition? (Video)