We sure hope you're not tired of Bronco leaks

Are you tired of reading about the 2021 Ford Bronco? Well, you'll have to bear with us just a little while longer, as the leaks just keep on coming.

These leaks lack some of the authentic flavor of earlier photos shared of both the midsize Bronco and the Bronco Sport. It's also somewhat unclear where these images originated.

We're inclined to believe that they're legitimate, or at least only mildly touched-up for the sake of clarity.

We'll start with the four-door, which is the one most likely to resemble the final product. This image appears to have been taken on the Bronco production line, which leads us to believe this is somewhere in the realm of a validation car used to test the line prior to the official start of production.

Cars like these often go onto auto show floors and dealerships as show-and-display type vehicles, often after some hand-correction to account for any issues during the assembly process.

Unlike the Bronco Sport we saw earlier, which appeared to be riding on dummy tires, this model is rocking a brawny set of all-terrain tires — likely a Goodyear Wrangler variant, based on what we've seen previously.

This particular car gives us our first real look at the Bronco's roof, which has remained a mystery thanks to Ford's elaborate dummy roof camouflage technique. It's difficult to tell given the resolution of the photo, but the contrasting color leads us to believe we're looking at a cloth top on this particular example, especially given how rounded off the roof panel is on the design mockup below and the distortions in the rearward window, which would suggest that it's not made of a rigid material.

Up front, we see the signature lighting elements for Ford's new 4x4, with LED strips almost completely encircling horizontal stripes that flank the "Bronco" badge in the center of the grille.

The grille is not the only element where the Bronco and Bronco Sport will get some styling overlap. The greenhouse dip between the A- and C-pillars carries over as well for a little extra family resemblance. 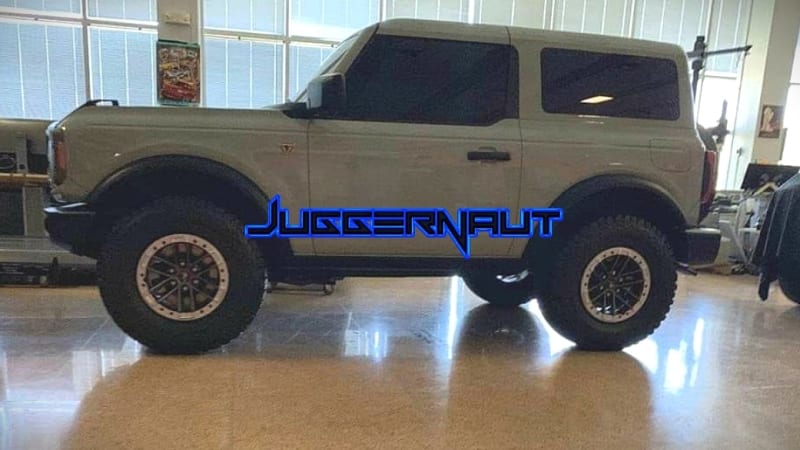 This two-door, which comes courtesy of Juggernaut Performance's Facebook page, is a horse of a different color, both literally and figuratively. Unlike the four-door above, this is a styling buck — the final design mockup on which the production model is based. If you don't believe us, look no further than the blacked-out windows (meaning it has no interior) and the complete lack of any visible suspension components.

This model wears a fender badge we don't recognize, but based on the ride height, tire choice and color-coded hardtop, we're guessing this is a loaded-up model intended to compete with the Jeep Wrangler Rubicon. The panel separation on the roof could point to a multi-piece removable hard top (or simply be an extension of the door gap).

We see the dip at the bottom of the greenhouse here, which is less pronounced due to the shorter body. It also appears to be wearing similar wheels and tires to the production-ish four-door. From what we see here, we're encouraged. This buck sports a lot of the iconic first-generation Bronco's styling elements, including the angle of the nose and a subtle crease along its flank meant to invoke similar touches on the original.

The 2021 Ford Bronco is due to be revealed in its for-real, production form this month, so we won't have to wait too long to compare this mockup to the real thing.