Powered by AI, it even does the thinking about farming

There's a Kenny Chesney song that goes "She Thinks My Tractor's Sexy" (tractor being a euphemism, based on the lyrics). And sexy is the vibe the Japanese masters at Kubota have gone for in the video, above, showing off their new X Cross concept with a tractor strip tease that reveals its futuristic form and intriguing treads. Modern as it looks, it still retains a few Kubota design cues, though even the traditional safety-orange livery has become a more sophisticated metal-flake tangerine.

Seen as a still image in the light of day, though, devoid of the video's dramatic lighting and satin sheet, you might mistake the Kubota X for a dreadnaught dispatched by Skynet. Part of the reason for that reaction might be the absence of a seat, steering wheel or other human artifacts.

The X tractor is a design exercise meant to tackle a problem with farming in Japan that's like one we have here in the United States. With farmers aging out, and far fewer in the next generation replacing them, there's a labor shortage. So the dwindling numbers who carry on the noble work of growing our food are having to take on more and more acreage. 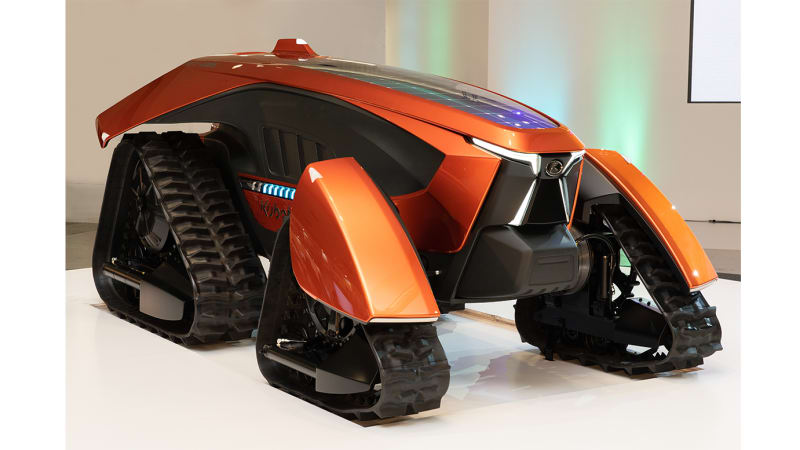 To mark the company's 130th anniversary, Kubota designers revealed the X this month at an exhibition in Kyoto, and it's a machine they hope will help take up the slack. Farmers in recent years have increasingly been using advanced technology to plant, spray, cultivate and harvest more efficiently. That's a direction Kubota's been headed since it established its AgriRobo series in 2017. The AgriRobo-equipped machines still look like a modern-day Kubota and can be operated by a farmer onboard, but they can also be commanded by remote control and can accomplish some tasks on their own. The X tractor takes things a step further: It has nowhere for a farmer to ride even if he wanted to.

But Kubota sees this as more than self-driving. The X concept as envisioned will use artificial intelligence to do some of the actual science of farming, for example by consulting weather forecasts and historical data, or evaluating plant growth — and then making its own decisions about what needs doing, and when. Imagine waking up in the morning and looking out the window to discover that your tractor has rushed off to finish planting because it decided there's rain on the way.

Instead of diesel, the Kubota X is electrically powered. Though, because it's a Kubota, presumably it's still comfortable crawling through a flooded rice paddy up to where its exhaust manifold would've been. No particulars were revealed about power output or its expected run time on a charge. Its treads can shape-shift to match the conditions, increasing the contact patch or lowering the center of gravity, or raising the tractor body to clear crops in the field. And with motors at all four crawlers, it can turn on a yen.

One thing Kubota didn't explain was whether, or how, the X would attach its own implements, and whether it would cuss like a human farmer at that chore.

Final note: Fifty years ago, Kubota similarly displayed a concept, the "Dream Tractor," in 1970 at the Japan World Expo in Osaka, and it resurfaced that image along with the reveal of the X. Groovy as it is, tractors didn't exactly evolve in this direction: 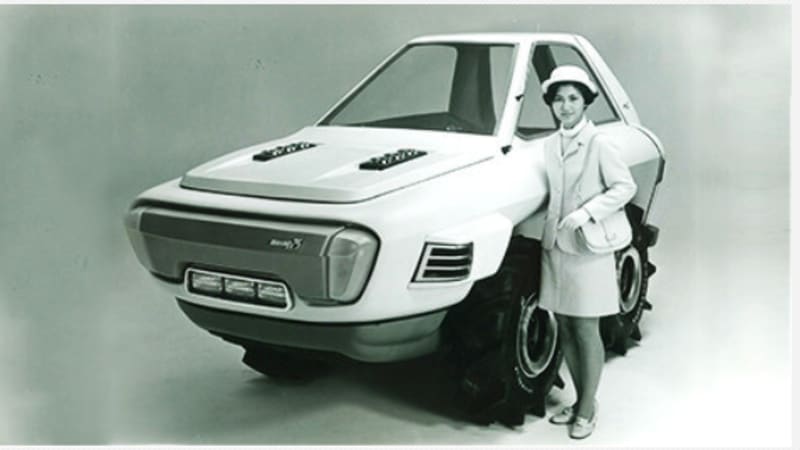