It's the latest product of Bentley's partnership with Bomber Ski Bentley has unveiled a new special edition of its Continental GT coupe with photos taken high in the Austrian Alps. On Monday, we were shown teasers of a Conti GT swathed in an eye-popping blue done up to look like an all-wheel-drive backcountry snow eater, and now all has been revealed.

This particular Continental GT will be running in livery that pays homage to its fraternal twin, which won the Pikes Peak International Hill Climb in 2019 and shares the same factory-built, twin-turbocharged W12. The 6.0-liter engine offers 626 horsepower and 664 pound-feet of torque. Bentley says it'll do 0-60 mph in 3.6 seconds on the way to a top speed of 207 mph.

Bentley says the the car’s three chamber air springs, 48V active anti-roll control system and iron brakes are entrusted with the cool running of the Continental GT on the purpose-built ice track — their pun, not ours.

Going further, a number of clues points toward an off-road-ish variant of the Continental GT. There’s the more rugged-looking treatment of the lower front fascia, where the fog lights are now encased in black trim that also lines the wheel arches, and Pirelli tire logos are displayed prominently at each front quarter. There’s also a ski rack on the roof, which may also feature front-illuminating LED lamps, and the coupe looks to have been lifted ever so slightly.

Junior World Rally Championship driver Catie Munnings will take to the wheel of the Bentley Continental GT at the 2020 GP Ice Race in Zell am See. The FIA European Rally Championship Ladies Trophy winner will be the first woman to race a Bentley in the modern era, the automaker said.

This is the latest fruit of Bentley’s collaboration with Italian ski-maker Bomber Ski, with whom Bentley recently partnered to offer limited-edition co-branded $2,750 skis and a ski-and-drive experience in March in Telluride, Colorado and Park City, Utah, starting at a cool $17,950.

We’ve seen the No. 9 on a Bentley before, with the limited-edition Number 9 Edition by Mulliner unveiled last March as part of Bentley’s centennial celebration. The number nods to the No. 9 supercharged Blower that Sir Tim Birkin raced at the 1930 Le Mans. And lo, but the Mulliner logo also appears on this model, too. 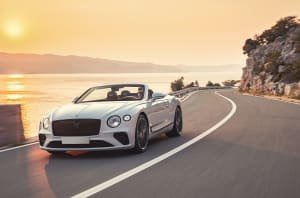