Stuttgart engineers opt for ducted fans instead of propellers 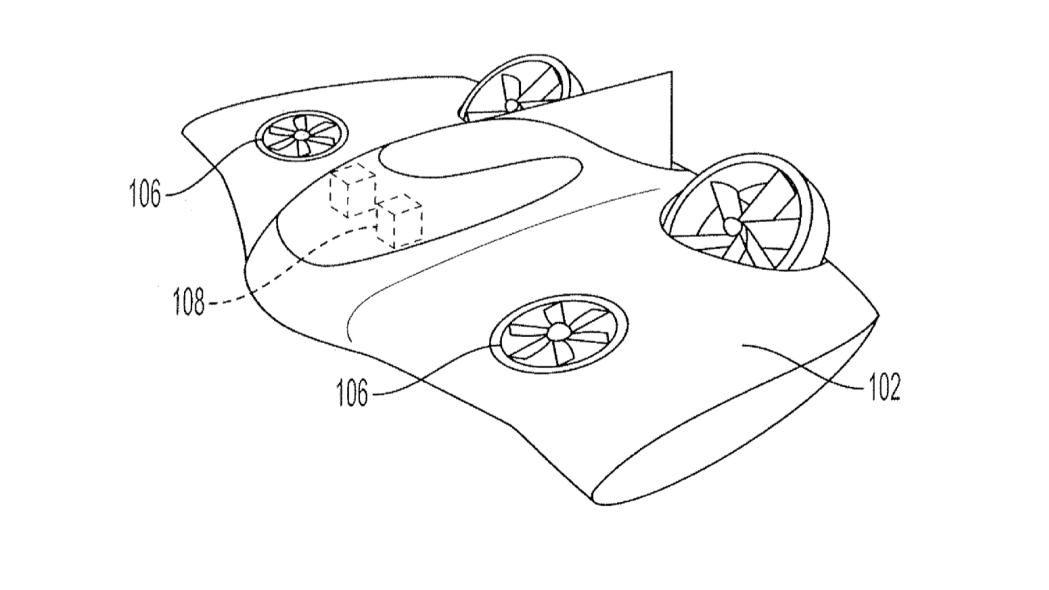 Porsche began talking up its bet on flying cars in early 2018. The automaker included an airborne passenger vehicle in its Strategy 2025 under "shaping the future of the sports car," and a board member said engineers were "a very early stage" with concepts that would be "able to fly on [their] own completely from A to B, but also enabling the passenger or pilot to take control for a certain amount of time, if it stays within its [performance] envelope." October of last year, Porsche signed a memorandum of understanding with Boeing to work together developing a concept for a “premium” electric vertical takeoff and landing (eVTOL) craft. Turns out that a few months before the official collaboration, Porsche filed two patent applications in July with the U.S. Patent and Trademark Office. The Taycan EV Forum discovered the paperwork, one simply for "Aircraft," the other for a "Power supply for an aircraft and corresponding aircraft." Both show line images of a flying taxi that could have inspired the slick rendering released with the Boeing announcement.

This imagining is all-electric and autonomous, although the craft will be able to "grant normal control to humans if they are sufficiently qualified." Compared to the rendering, which had a clearly extended nose section, the earlier patent drawings are more like a two-seat cockpit and stabilizer set into a large airfoil. Instead of the propellers we're used to seeing on flying taxi concepts so far, Porsche engineers have gone for an array of ducted fans — a fixed pair of horizontal fans set forward in the airfoil, another pair of fans set into the trailing edge. Those at the back can swivel at least 90 degrees, providing a range of vertical and horizontal thrust. One of the drawings shows another possibility mentioned in the text: "The aircraft can be equipped with folded or even selectively foldable airfoils. One corresponding variant enlarges the wing area which is active during horizontal flying, without increasing the footprint of the aircraft, how­ever."

A novel feature is an extendable bank of louvers over the horizontal fans. The slats open and close in the service of aerodynamic efficiency, such as during horizontal flying when the rear fans produce adequate thrust.

The patent also goes into detail about cooling systems for the high-voltage batteries in the cockpit. The text refers to a "cooling plate below the airfoil for dissipating heat from the electronic components and cooling fins for dissipating the heat which is output by the cooling plate," and other ways to shunt battery heat to the edges of the airfoil. Even the fuel tank gets a mention, engineers having conceived of "aircraft fuel tank flammability reduction method by way of the feeding of compressed air into an air separation module which contains an oxygen separating membrane."

A Porsche study completed in 2018 found that urban air transportation could increase significantly starting around 2025. We don't expect to see a flying Porsche by then, but it's clear the sports car maker plans on being ready when the time is right.