Nissan design is about to get much more Japanese LAS VEGAS — We broke down Nissan’s 2019 sales doom and gloom the other day. There are multiple factors that contributed to it being a particularly down year for Nissan and Infiniti, but at the end of the day, it all comes back to the product sitting on dealer lots.

To that end, we sat down with Alfonso Albaisa, Nissan’s senior vice president of global design, to hear about where he thinks Nissan is now and where he wants to take the brand in the future. What we heard was a bit surprising to start, but it also left us with a glimmer of hope for future products from one of Japan’s most important brands.

Beginning with a reality check, Albaisa opines that somewhere along the way, Nissan design has lost its way in Japanese culture. Nissan/Datsun has an epic history of making iconic cars — the list of sports cars and properly wonderful road cars is far too long for us to recount here —  but right now, the company isn’t leveraging that history the way it should. Albaisa wants to change this.

“We re-studied what it meant to be Japanese ... let’s all take a moment and understand who we were,” Albaisa says. “We are not just known for being one of the oldest brands at the beginning, a pioneer of the Japanese industrial era, we are a key player, and I studied all of that stuff."

Albaisa's quest to re-learn what it means to be a Japanese icon involved more than just staring at old Nissans. He went back over 400 years of history to gain a better grasp of Japanese culture over time. He studied Tokyo in the Edo era and the birth of the Japanese middle class in the 1950s. Albaisa meets every two months with Nissan designers of years past, some over 90 years old, in search of inspiration for the new era of Nissan.

The emergence of the Japanese middle class is the part Albaisa really wants to key in on, though. Nissan/Datsun aggressively went after this segment in that era (1950s-1960s), with the halo result of it all being the birth of the Z car, the 240Z. Nissan was democratizing the sports car at that time, and the gorgeous coupe is still revered by enthusiasts today. However, Honda and Toyota have since emerged as the Japanese brands to beat in this segment, leaving Nissan wondering where it went wrong. 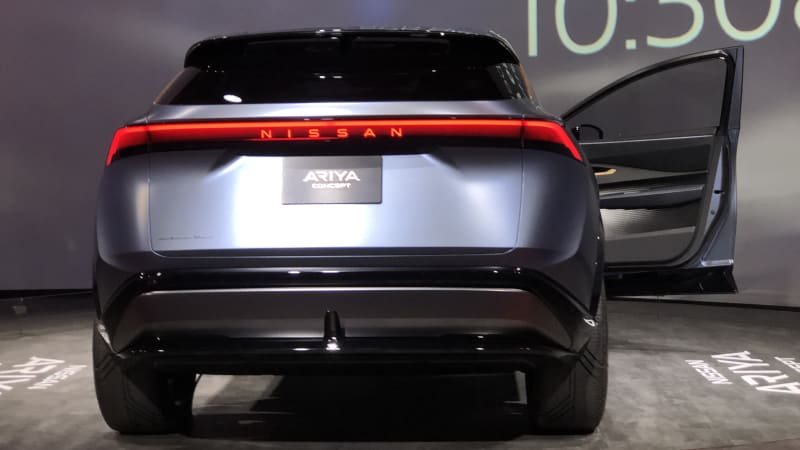 So, there’s a solution here, right? Albaisa points to the Ariya Concept as the new direction for Nissan design in the company’s upcoming electrified era. Nissan has previously said it’s going to introduce a production version of the Ariya, and Albaisa told us this concept is “really close to a real car."

“They are almost identical to see them,” Albaisa said, comparing the Ariya Concept with the production car. “It’s just a matter of degree of expression. The wheels are an inch bigger. The Ariya is 7 mm wider.”

Expect to see Ariya-like looks for the other six to eight EVs Nissan says will come to market eventually. Albaisa calls the design theme “timeless Japanese futurism.” There’s a distinct sense of minimalism we feel when looking at the crossover in the flesh. Albaisa echoed our thoughts exactly: “We’re intentionally going to take the brand more minimalist,” he told us. We couldn’t be more thankful for this, as some new Nissans are a total mess on the interior. Mazda nailed it with the new Mazda3 and CX-30 minimalist interiors, and we hope Nissan manages to pull through with its own interpretation of minimalism.

As of right now, Albaisa says he has 26 cars (many electrified) in his design studio, and a lot of those are Infinitis, too. Unfortunately, that means that those cars are still in progress and not on dealer lots where they need to be. If the Ariya Concept really is an indication of what we’re going to see from the newly Japanese-enlightened Nissan, the future may end up being far sunnier than the dismal numbers Nissan is looking at today.