It makes even the worst roads feel fabulous

10
View All Specs
Add a Review

BIRMINGHAM, Mich. — I came home from Florida, unpacked, and was treated to a snowstorm the day after my vacation. As I sat in the office, watching the white stuff come down harder and harder, Autoblog Editor-in-Chief Greg Migliore started asking questions. “Is the Bentley in the basement?” he asked, referring to the $280,000 Continental GT V8 that I was supposed to drive home that evening. Later, “What kind of tires are on the Bentley?” I wasn’t too nervous yet. It was on all-seasons, and was equipped with all-wheel drive. After more hours of blowing snow, he said to me, “If you want to punt on driving the Bentley until the weather’s better, that’s fine.”

Punt I did, taking the 2020 Toyota 4Runner TRD Off-Road Premium home that night instead. The next day, after the plows, salt trucks and sunshine had done their thing to the roads, I finally got to scratch the Bentley itch that had been nagging me since I had landed in Detroit. I grabbed the weighty key fob, Autoblog Associate Producer Alex Malburg grabbed a camera and mic, and we headed down to the basement together to film the video you see above.

Opening the door to the 2020 Bentley Continental GT V8 greets you with a big white “B” illuminated on the ground from the puddle light, surrounded by a yellow circle. I don't recall seeing another multi-colored puddle light before, but I’ll remember this one.

We got in the Bentley, fired it up, and gingerly crept out of the basement garage. Before exiting, I made sure to give the car a few revs, but there wasn’t much to hear from inside the cabin.

Despite the lack of volume, the 4.0-liter V8 is potent. With 542 horsepower, it’s just shy of the 552 horses of the original Conti GT’s W12, and it out-torques it at 568 pound-feet. Helping to motivate it is a pair of twin-scroll turbochargers. As Alex and I took the Bentley for a cruise down Woodward Avenue, I got to test its straight-line acceleration at stoplight after stoplight. Despite the Bentley’s 5,000-pound curb weight, it’s brisk, but also smooth. There’s no noticeable turbo lag as it motivates itself toward extralegal speeds. Bentley claims it’ll do 0-60 in 3.9 seconds. There was no way I’d get this thing anywhere near its 198-mph top speed. 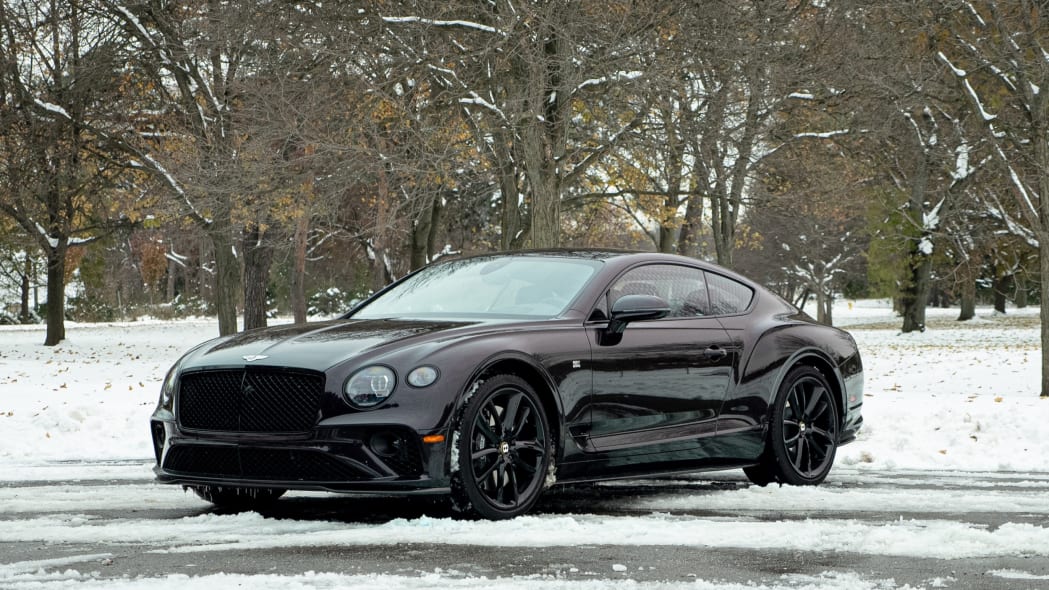 The big V8’s sound doesn’t intrude inside. There’s no constant drone, and you only really hear it when you get on the gas. Then it’ll give you a sonorous growl, punctuated by a little whistle from the turbochargers. In Sport mode, you can hear the faint crackling of the exhaust. It’s much louder from outside, which is a testament to the sound deadening.

In "Bentley" mode (which is just a default, normal mode) the response to a bootful of right pedal isn’t instantaneous. The car hesitates a moment before downshifting, as if to ask, “Do you really want to gun it right now?” The car is much more responsive to accelerator input when in Sport mode, or you can go the foolproof route and put the transmission in manual mode.

Despite its athleticism — and its 22-inch wheels — the Conti's ride is rather forgiving. Even in Sport mode, it doesn’t transmit much of the thumps and bumps into the cabin. At the same time, it doesn’t feel disconnected in Sport mode, either. In the more detached Comfort mode, the car seems not to float on its suspension, but to hover above the ground like a Star Wars landspeeder. 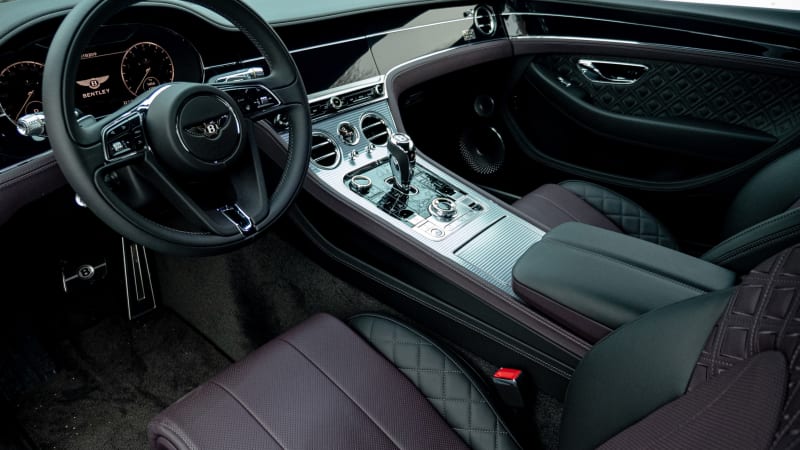 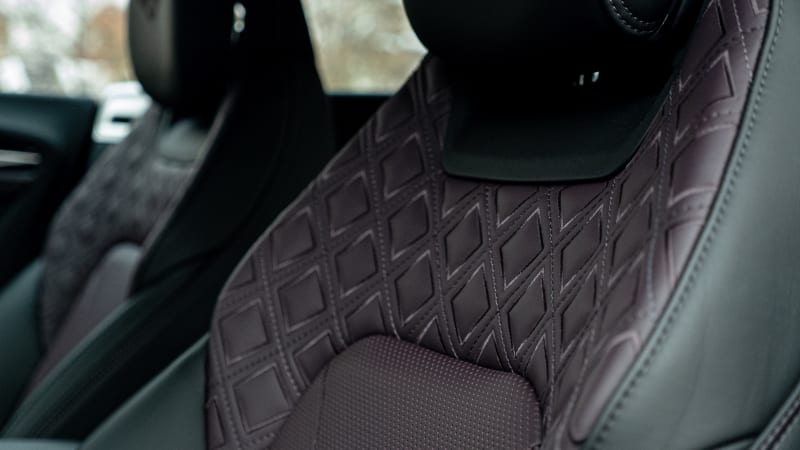 There was still a bit of snow on the roadways during my days in the Bentley, especially when I got off the highway and neared my house on some of the less-traveled, less-maintained roads responsible for the first local snow day of the season. This Conti is all-wheel drive, with a bias toward the rear. If you’re looking for something that you can slide through the snow with any feeling at all, you'd better also buy something less civilized. Perhaps a Subaru Legacy or Volvo V60? Such cars would have the compliance and forgiveness to make even the wimpiest of corners feel heroic in the snow. The Continental? It tracked straight through corners without any notable rear-end wiggle, with the traction control working quietly in the background, keeping any feeling of raucousness far from the seat of my pants.

The gem of this car, however, is the interior. I wouldn’t necessarily say the Conti GT earns its price tag from performance or handling or technology. Sure, it’s a well-rounded car, but the cabin's materials, craftsmanship and comfort are what truly makes this car special. I was wowed by the design. The switchgear is hefty and satisfying. When you start the car, a panel in the center of the dash rotates vertically to reveal a wide touchscreen. Press the “Screen” button below it, and it’ll rotate again to hide the screen and reveal a clock, compass and timer, each looking like an expensive Breitling timepiece.

If you like leather, the Bentley is heaven. It’s everywhere. Seats, doors, dash, even the headliner are leather. Frankly, it's a little hell-like when I remembered where leather comes from, and how many dead cows filled the Conti’s interior. Still, it sure looked nice, and its Damson color matched our car’s deep plum-like exterior paint. The stitching and embroidery are impressive. 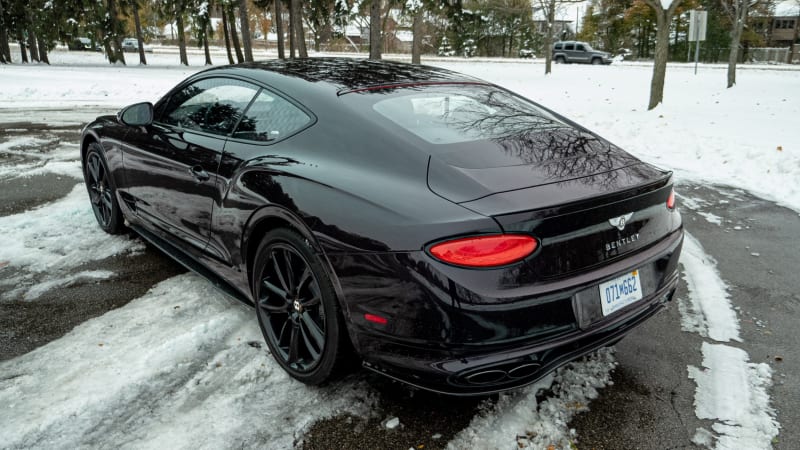 Despite the brand, and the price tag, this Bentley didn’t turn too many heads on the road. When it did get the occasional discerning car fan’s attention, it kept it. It sure kept mine. As good as it is to be in the car, there’s a lot to appreciate on the outside, too. Its profile is voluptuous, and the closer you get, the subtler details come to life. Malburg and I spent a good amount of time circling the Bentley, pointing out things like the size of the brakes, the slim carbon fiber aero work, and the diamond patterns in the lighting that mimic the look of the grille.

With the snow, and the resulting potential for danger from both the road conditions and other motorists, my couple hundred miles in the Conti GT were spent civilly. The brief miles spent stretching the Bentley’s legs were a treat, though, and it felt quite comfortable and neutral hugging the ground in a carved corner. I’ll be interested to try it again when the weather cooperates. As much as I enjoyed starting it in the parking lot or picking over every little detail in the cabin, the Continental GT V8 is only that much more satisfying in motion.

Nebraska's Chevyland museum is selling its collection of vintage cars

These Next Gen race cars are the future of NASCAR

Bugatti unveils a $300,000 pool table that stays level on a yacht