BANFF, Canada — After a quick jaunt through the mountains and a slalom or two around a rural airfield, the new 2020 Volvo XC60 T8 Polestar Engineered is a fascinating mix of characteristics that we're eager to spend more time with. It has the same functionality that makes the lesser XC60s popular among Volvo buyers, with a sprinkling of almost incongruous go-fast bits.

Yup, the Öhlins units require a twist of the knob. Like anything involved with the Swedish company, the implementation is exceptionally high-class. Up front, a little coin-edged, bronze-colored knob pokes through a substantial white strut tower brace, with a damping curve graph printed on. It’s IKEA catalog meets track day chic. Do XC60 owners assemble their own furniture? Would any ever twist this knob? It’s a question we can’t answer at the moment, since we didn’t have time to do any twistin’ in our brief outing.

We did test out the comically large Akebono front brake calipers that grip 14.6-inch rotors, painted the same shade of yellow as the seat belts inside, on an airport runway. Volvo cranked up the damping rate on the units we drove at the airport, sending us through a traffic cone slalom which the XC60 dispatched cleanly, and then onto a quarter-mile straight – a mat one pedal, then the other sort of affair. We threshold-braked twice from whatever velocity the XC60 achieved, and stopped with confidence. 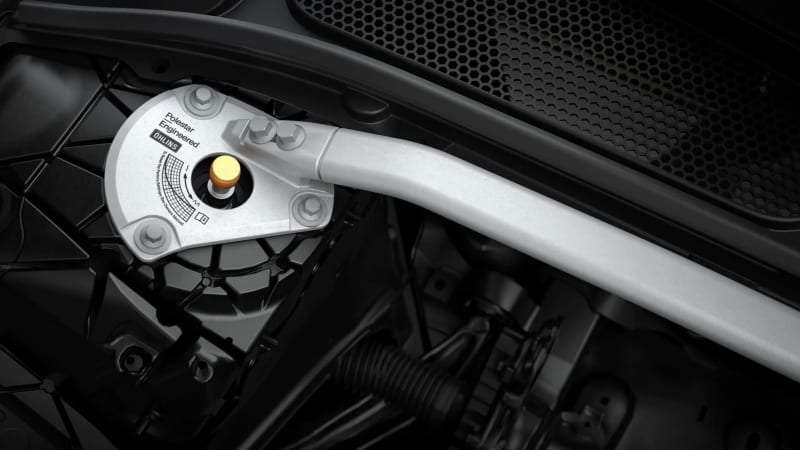 Whatever other deficiencies an extended drive may reveal, you can rule the brakes out. Fit massive units like this to a crossover and they’ll get the job done. The only surprise was the prominent Akebono branding – not a well-known performance brand, although a major OE supplier. The smaller calipers on the S60 and V60 Polestar Engineered vehicles are from Brembo, a company with much greater name recognition. Maybe Akebono wants to change that paradigm.

That said, the only workout these brakes really got was at the airport; the leisurely highway cruise to get there, dotted with aggressive (yet polite!) Canadian speedtraps, didn’t lend itself to much probing. That’s a shame, because it would have given us an opportunity to see how much Volvo has actually improved the brake feel when compared to last year’s otherwise mechanically similar S60 T8 Polestar Engineered. Associate Editor Joel Stocksdale panned the blend between mechanical and regenerative braking of that model. Volvo says they addressed this issue by switching from a vacuum-boosted brake system to a hydraulic one for all 2020 T8 models, and we’ll need more time in the car to see if it did the job. Nothing stood out when standing on the brakes on the runway, at least. 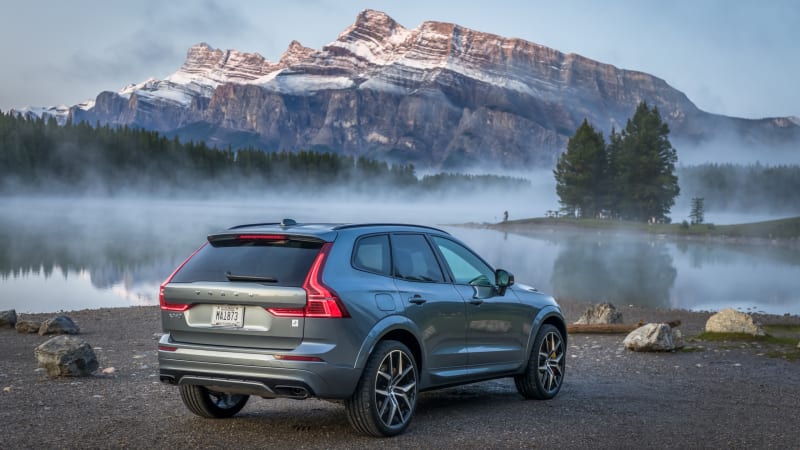 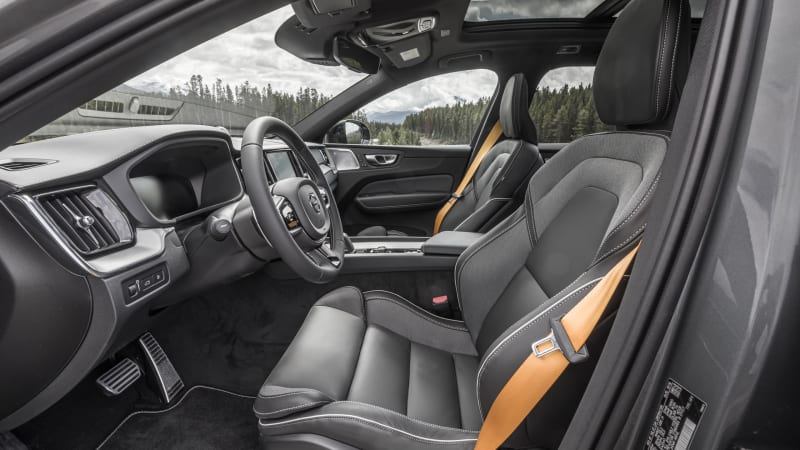 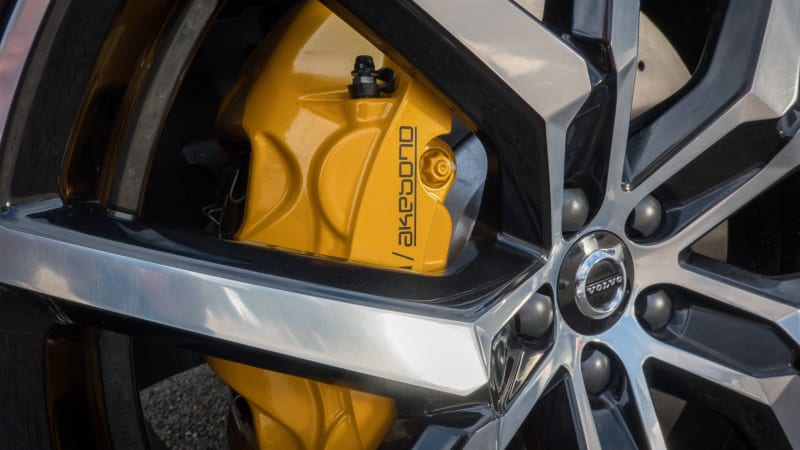 The extra motivation that this $72,045 Polestar-fettled XC60 gets, which requires such massive brakes, comes from its “chipped” T8 powertrain. The numbers are substantial: 415 horsepower and 494 pound-feet of combined torque, derived from a twin-charged 2.0-liter gas engine and two electric motors. However, a closer look at the spec sheet reveals this Polestar Engineered isn’t that “extra” after all – 15 hp and 22 lb-ft on top of the admittedly potent “regular” T8 powertrain.

Volvo claims the Polestar Engineered will hit 60 mph in 4.9 seconds, and we believe it. At full boot, the XC60 Polestar Engineered surges off the line, making a serious argument that electrified performance variants have found their mainstream mark. We wish the transmission was as swift-witted as the powertrain, however. The eight-speed automatic transaxle hails from Aisin, and it’s frankly not a very sharp tool. The XC60 would be well-served by a quicker-shifting ‘box, but that’s not happening anytime soon.

The XC60 itself, it should be noted, somewhat polarizes our staff. It’s a bit portly-feeling for its size, sometimes ponderous, and never as self-assured as its stablemates. It is a very compelling choice among its peers, and all appreciate the typical Volvo attention to detail – the cabin is as wonderful as any other contemporary Volvo, exuding a specialness its rivals from BMW and Mercedes-Benz simply can't match. 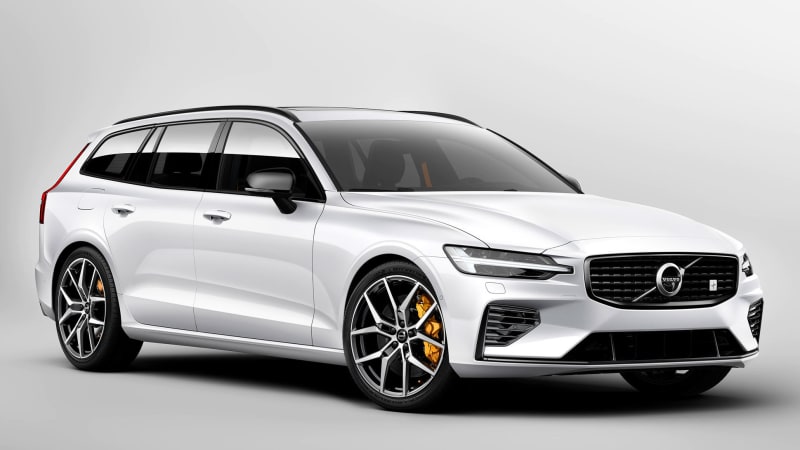 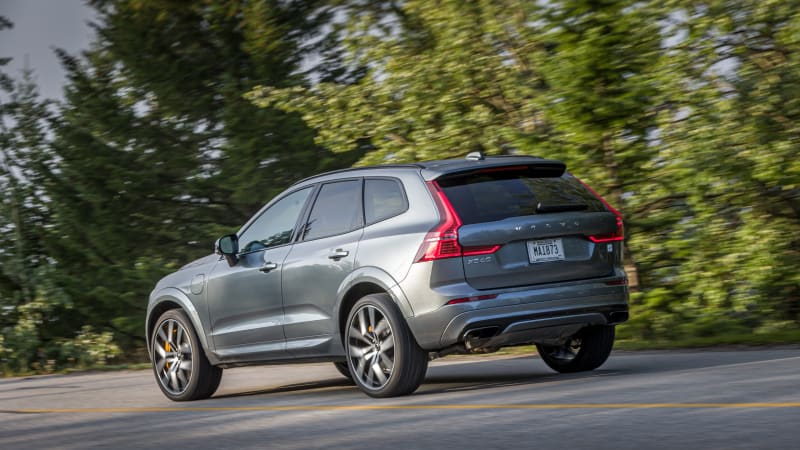 But there’s the rub, since another Volvo that’s getting the Polestar Engineered treatment is the far more compelling V60 wagon. We have seen the V60 Polestar Engineered in the flesh, and it is a thing of grace and beauty, distilling the essential utility of the XC60 into an achingly sexy profile. It's also cheaper, starting at $68,295 – a difference of $3,750 – and it's actually more spacious inside. While it wears Brembos instead of the more massive Akebono front brakes, there’s nothing else to knock it for and lots going for it, particularly less mass (both physical and visual). Then again, the XC60 offers a higher seat height, something buyers love, and it'll be much easier to get ahold of. The V60 is, for Americans, a special-order-only proposition, requiring uncommon patience to acquire.

But despite casting a jealous eye on the V60, don't doubt for a second that the XC60 is one of the best midsize crossovers you can buy, with an additional (and welcome) shot of adrenaline. And we need more seat time in the XC60 Polestar Engineered to fully suss out its dynamic proposition. The sleek wagon is a more rational choice as a performance vehicle, but wagons are infinitesimal rounding errors on the yearly sales sheet. Go-fast crossovers are much more attuned to buyer’s wants these days. In that climate, we’re thankful that Volvo offers both. 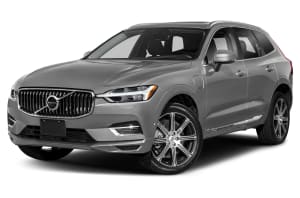