Jeep Wagoneer spied in prototype form for the first time

The big Jeep is making a return 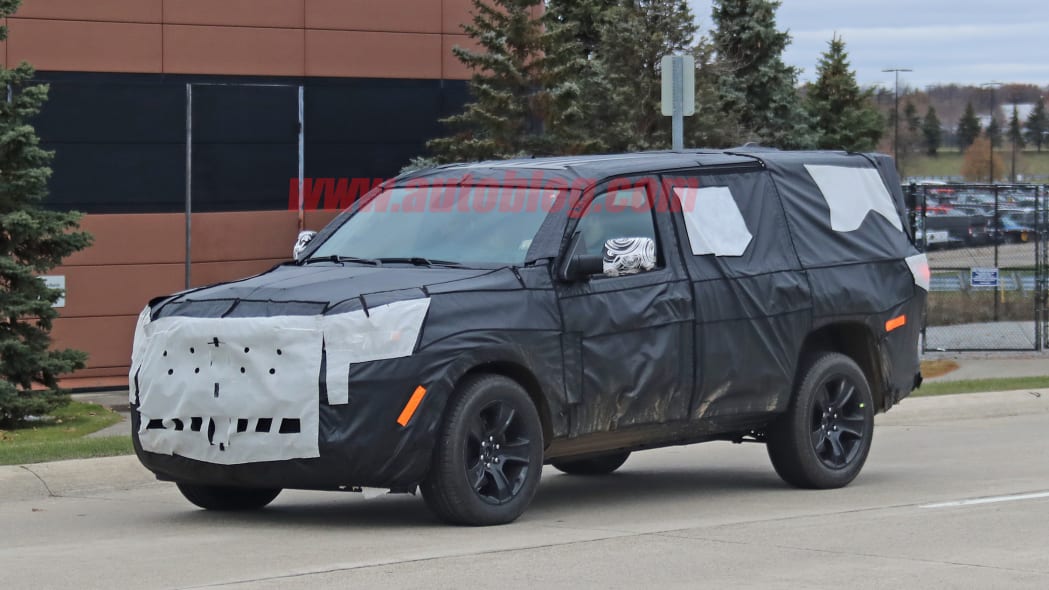 Like the rumors, this concealed SUV looks like an oversized Grand Cherokee in form factor. The actual body lines and design are left completely to our imagination at this point, but it beats looking at a Ram truck mule. We can’t tell what’s going on in the back, as Jeep has a full tented rear end to act as a concealer. The original Grand Wagoneer was pretty boxy in nature, so we wouldn’t doubt if Jeep tries to play up this angle with a heritage-inspired design. The wooden paneling can probably stay in the 1980s, though.

Despite the styling remaining a mystery, we’re getting heavy Dodge Durango vibes from this prototype. Its tall front hood, long wheelbase and high roof all play this angle up. The wheels and tires are definitely truck-spec, and the ground clearance looks impressively high with that wheel gap. Suspension-wise, we can see it has an independent rear suspension like the Grand Cherokee. As this Jeep is intended to be a more luxurious SUV offering from Jeep, this choice comes as no surprise — a comfortable ride must take center stage here.

We’ll hope to see more shots of this big SUV with less camouflage as the months wear on. It’s expected to arrive as a 2021 model, sharing a fair bit of its DNA with the Ram 1500. We’ve heard rumors and now seen a patent drawing of an inline-six engine from FCA. The 5.7-liter V8 is a possibility, but this inline-six could make for a very special vehicle. It would also match the vehicle’s expected persona of luxury motoring. For the time being, it remains speculation, but we’re excited to finally see the big SUV out roaming public roads.