The Supra returns as a livable sports car Stepping out to the brisk fall air to a Renaissance Red Supra with the key in hand and the world at my disposal makes this background noise melt away for a moment. I press the unlock button on the Toyota-badged BMW key and chuckle as the distinctive BMW unlock/lock beep sounds back at me. Right. Let’s focus on the car, not the hype, and see how it sits with us.

Seeing the Supra in public, parked next to other mundane crossovers and sedans is a shock. It’s small. And low, so attractively low. At 5-foot 10-inches, I tower over the roof as I walk up behind it. The Supra is curvy to the point that it doesn’t look like anything else on the road. Photos hardly do the indulgent sheetmetal justice. It begs to be walked around and studied with detail, amazing onlookers with how much radius Toyota managed to get into the bodywork. The unique decklid spoiler is more tasteful than a giant wing, and just to my liking. Its door handle sits just forward of the wide, rear haunches, swinging out a sizable front door. As I expected, it’s a long way down to the driver’s seat. Good. Just how a sports car is supposed to be.

Settling in, I immediately notice the short windshield and limited greenhouse. I could’ve moved the power seat upwards to have better visibility, but I’d rather take advantage of the excellent low H-point the Supra provides. Too many cars — even sports cars — nowadays force the driver to sit up much higher than they should be. The Supra puts me right where I want, sitting way down, amplifying that feeling of connectedness to the chassis.

Before you head to the comments and tear apart Toyota for using the BMW interior nearly wholesale, hear me out. The steering wheel is a Toyota contribution, and it’s fantastic to use. Instead of the thick, blocky wheel BMW puts in the Z4 and others, the Supra has a thin-rimmed leather wheel that’s a joy to use. My hand is able to wrap around the whole wheel, and it’s highly adjustable via both tilt and telescope. Even with the seat all the way down, I can have the steering wheel in my lap where it doesn’t block the gauges. Now that’s proper attention to the driver. My only qualm with the wheel is the rather unsightly center insert. It’s a blob-like, boring circle that comes off as a complete afterthought.

The gauge cluster is also partly a Toyota piece. In true enthusiast fashion, Toyota put a large tachometer right in the center. It has huge, white numbers, making it easy and intuitive to read at a glance. Porsche does this with its partially digital clusters, and it’s perfect. The same can be said about this Toyota-BMW gauge cluster mashup.

Then yes, we get to the BMW-heavy portion of the interior. There’s good and bad here. I’ve never worshipped at the feet of the fourth-gen Supra, but using that car’s driver-focused slant of the center stack in the fifth-gen would have been sublime. The rest of it, I like. BMW makes damn good interiors, and the Supra benefits greatly from this. There are easy-to-reach physical buttons for the important controls, and all of the plastics are high quality. Luxury is in the air, and we can thank BMW for it. 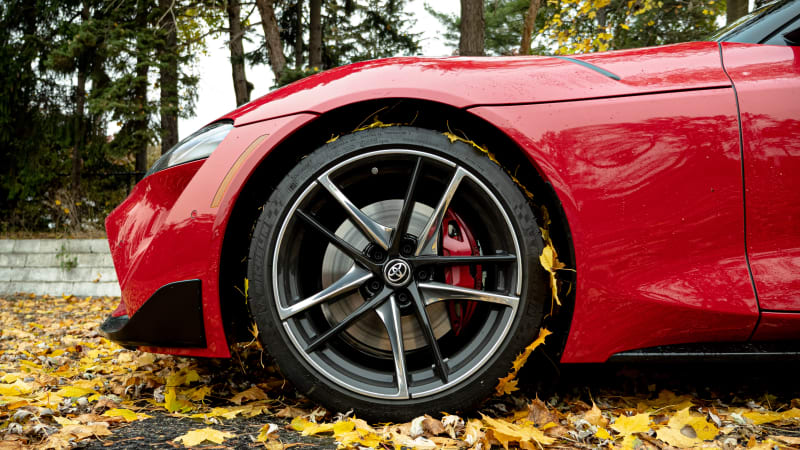 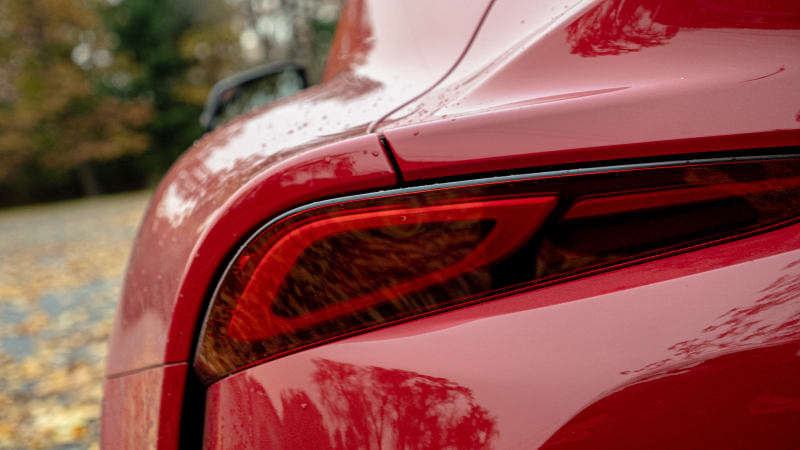 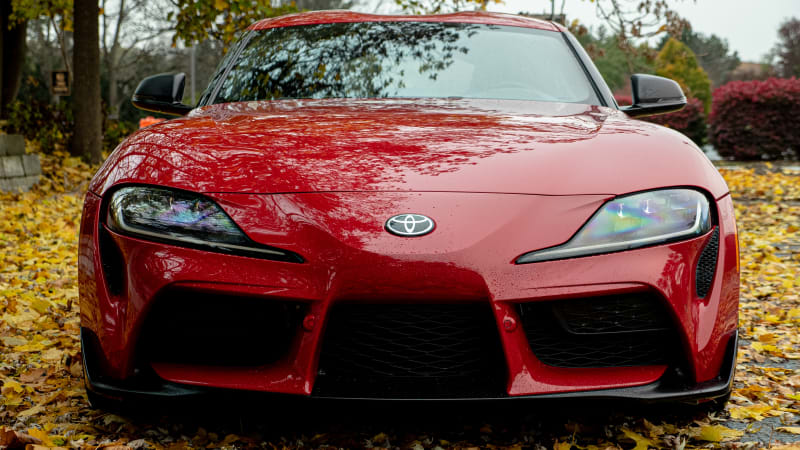 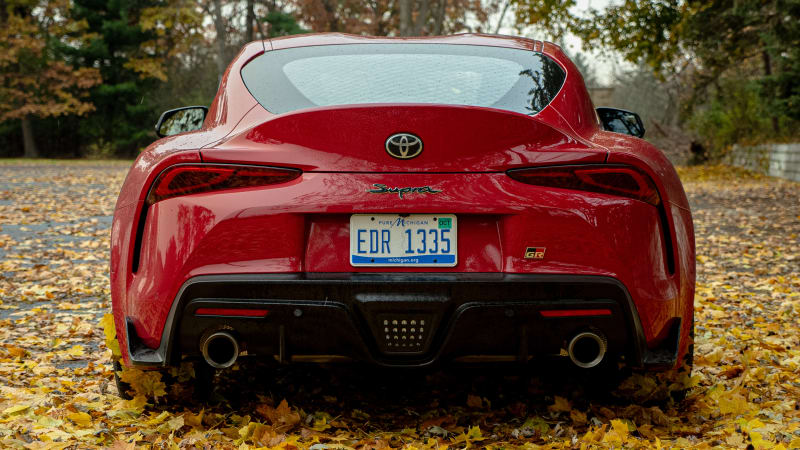 I press the brake pedal, push the start button down, and the 3.0-liter turbocharged inline-six fires to life. That’s a good sound, I think to myself. This being a modern, technological masterpiece of a Supra, I got my phone sorted via wireless Apple CarPlay (because BMW), turned on some tunes to play over the excellent JBL audio system and set off to the best driving roads around. The twisties were over an hour away straight through rush hour traffic, so I had some time to get acquainted with my personal Supra for the next couple days.

Turns out, the Supra can double as an excellent daily driver if you’ve no need to carry other people and their things around. It’s no grand tourer, but the Supra is downright comfortable when it needs to be. Bumps are dampened out nicely, and the driver assistance systems make highway driving a breeze – and they can be turned off once the freeway drudgery is over.

One last button — the large Sport mode button — puts the Supra right where it needs to be for attacking a backroad. Interestingly, the Supra only has two modes: Normal and Sport. As there is no proper “Race mode” on the Supra, Toyota has seemingly tuned Sport mode to be a little more aggressive than I expected it to be. The exhaust gets noticeably louder, adding in a series of pops and bangs on the overrun. The BMW provided and Toyota calibrated shocks stiffen up considerably, but the ride never gets uncomfortably choppy on a bad road. The ZF eight-speed automatic reacts quicker and keeps the revs up, providing downshifts when it can and holding gears as it should. Traction control can be turned off with the press of one button, and stability control deactivates with a longer button press. Manual mode is a riot too, as I found myself tapping the gear lever into “M” more times than not. It’s just about on par with the speed of a dual-clutch transmission, but doesn’t punish with choppiness at low speeds. Toyota says it did the final tuning and calibration for just about everything on the Supra, and we’re especially happy with the way this transmission reacts to our inputs. Every situation I put it through left me impressed, but that doesn’t mean I’m content with it. The Toyota Supra should either come with or offer a manual transmission. Full stop.

I’m also impressed with the engine. The 3.0-liter feels stronger than the 335 horsepower and 365 pound-feet of torque it’s rated at. Lag is minimal, and it pulls without relief all the way to redline. Many turbocharged engines begin to fall off a cliff as the revs climb, but this excellent BMW inline-six just gets angrier the higher I rev it. There’s no lack of torque down low, either. I was abundantly pleased shifting around 3,500-4,000 rpm in around town driving as the engine makes loads of torque, even at low rpms. 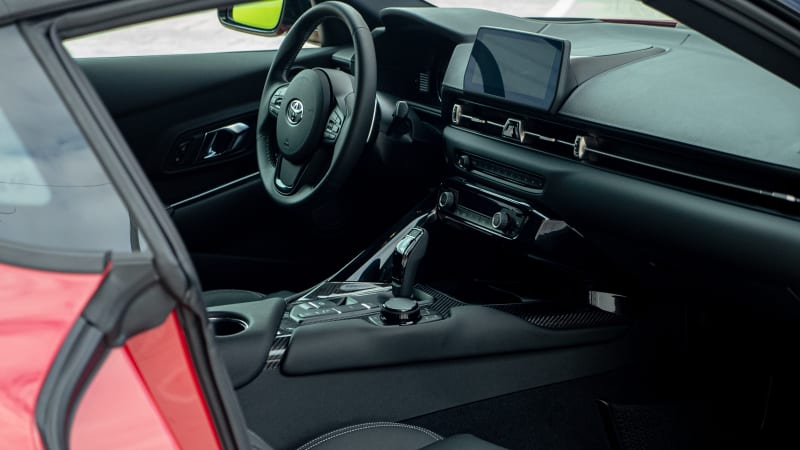 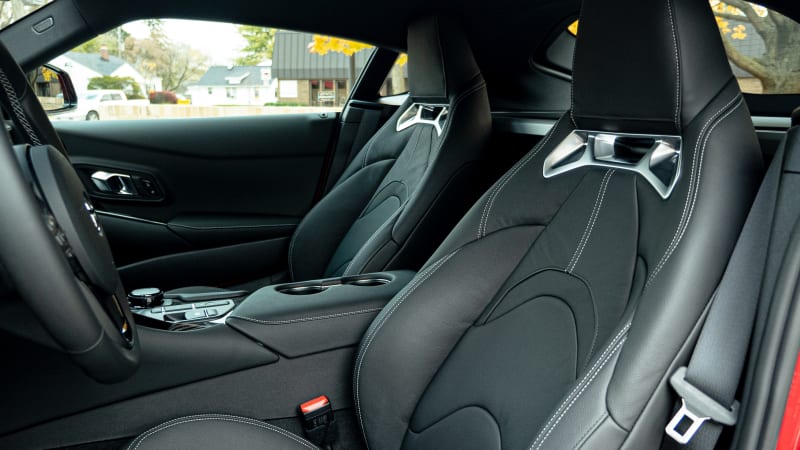 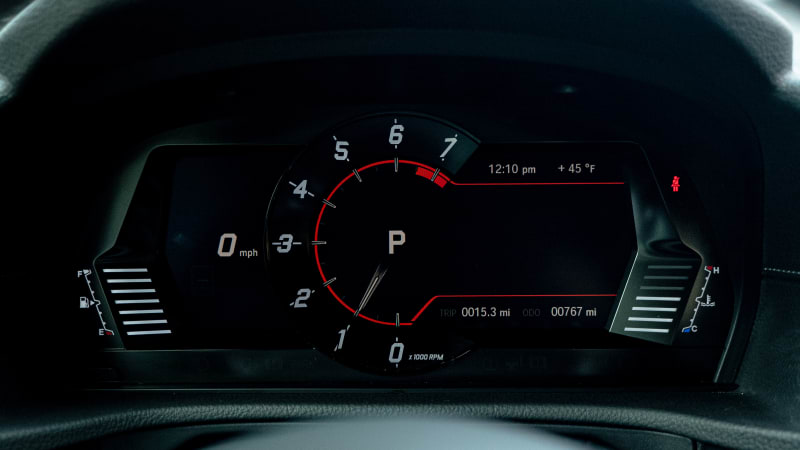 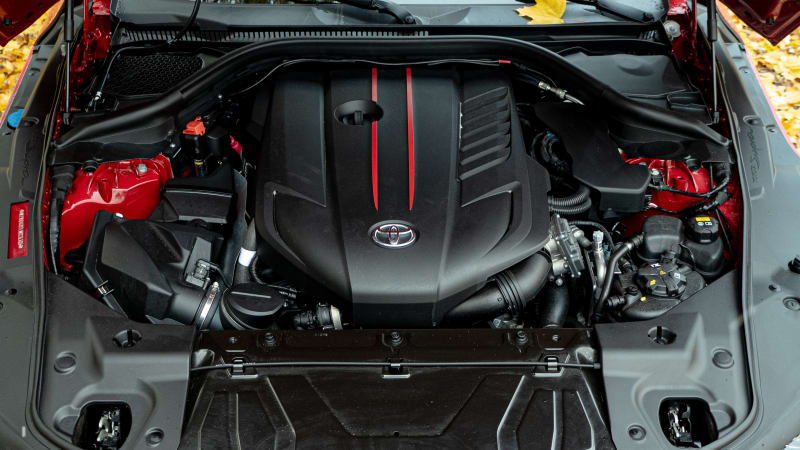 So yes, BMW knows how to make a proper powertrain. Old news. What really makes this car worth buying is the way it handles. Despite weighing 3,397 pounds, it’s light on its feet. The steering is quick and precise, but not twitchy. That long nose gets shorter as it tucks in and out of corners. Similar to the Mercedes-AMG GT, it’s point-and-shoot in nature. The front-end grips and claws the road with the excellent Michelin Pilot Super Sport rubber. A hefty dose of throttle in-corner with stability control off shakes the rear end loose, but it stays planted underneath me otherwise. In short, it’s a fantastic handling sports car. Our First Drive review found that the compliant and supple suspension fell apart a bit on track. The amount of body movement left us feeling distressed, but Toyota did engineer in the ability to make permanent improvements via aftermarket modifications. Like most new cars today, the Supra isn’t a track car from the factory, and that’s totally fine. The tuning is spot-on for traversing both smooth and broken up roads, which makes it a spectacular road car.

Anybody looking to buy a sports car in the Supra’s price range (significantly cheaper than a Z4 with the inline-six) needs to take this car seriously. At a base price of $50,945, it’s $13,750 less than a Z4 M40i. A step down to the four-cylinder Z4 brings the two in line with each other, as the 30i only costs $50,695. When it comes to performance for the dollar, the Supra is the clear choice among these twins. You don’t need to be a Supra die-hard to like it either. I never had the fourth-gen Supra on my bedroom wall, nor have I ever had any desire to buy one. This Supra, though, is a sports car I could enjoy driving every day. The interior is upscale and tech-rich thanks to the BMW platform. I felt like a rockstar every time I walked up to the thing over my couple days with it. And that exhaust note … it’s divine. For the price — ours graded out to $56,140 — the Supra is legitimately enticing.

My disappointment in Toyota for not building its own car waned the longer I drove it. If a sports car with an automatic transmission is something you want (which is now the case with many new sports cars), I highly recommend going into this one with an open mind. Forget the BMW controversy; don’t worry about it not being an exact replica of the fourth-gen. Toyota has a second fantastic sports car in its lineup now, and it just happens to be named Supra.